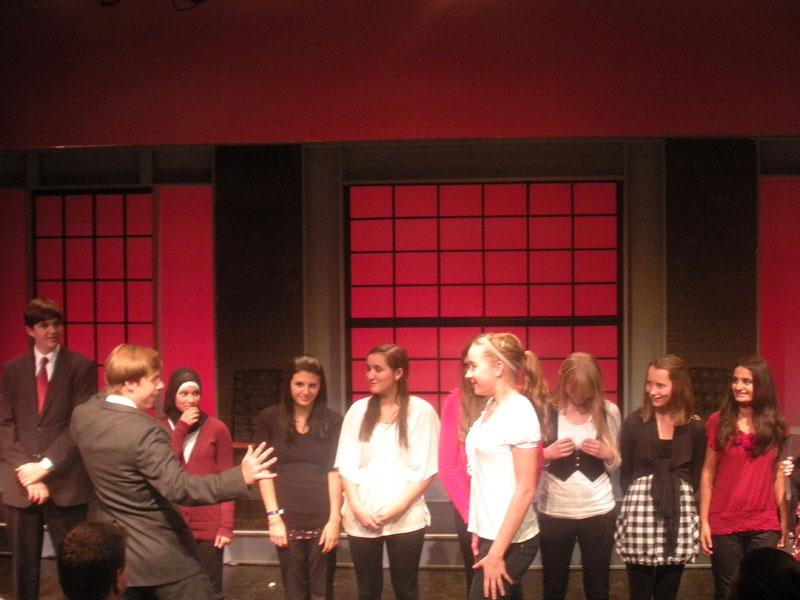 Freshmen at Hinsdale Central performed an improv show this past weekend in the auditorium. The show was modeled after the traditional improv style play, where the characters do not know what they will say; it all depends on the audience.

Mr. Peter James Parsons, the director, came in to put on the show, and also to teach the students the art of improv. “The important thing is getting everyone on the same page and the idea that we’re all in this together; there’s no star in this performance because everybody is out to make a good show,” Parsons said.

Many of the actors in the show had little to no previous experience in improv, but Parsons was able to bridge the gap between the performers and the audience.

The group aspect played a huge role in the success of the show. The actors needed to work together in order to make the show funny and keep the flow going.“The cast that [Parsons] picked was really good because… I only knew about five people in the group at first, and now I know everyone and I can walk down the halls and give them a high five or a hug; it’s really awesome,” said Emma Day, an actress in the show.“There’s no lines, so you kind of get nervous thinking ‘How am I going to get people to laugh?’ and that’s nerve-wracking… but you just work on it,” Day said.

In order to help the actors get the hang of improv, Parsons had them play mini games that had to do with the art of improv and hone the specific skills that are necessary in order to put on a successful performance.

“It’s just important to remind the kids of the idea that you’re communicating with the crowd and the people on the stage and being prepared with anything that comes up,” Parsons said.