Solstice embraces the world of technology 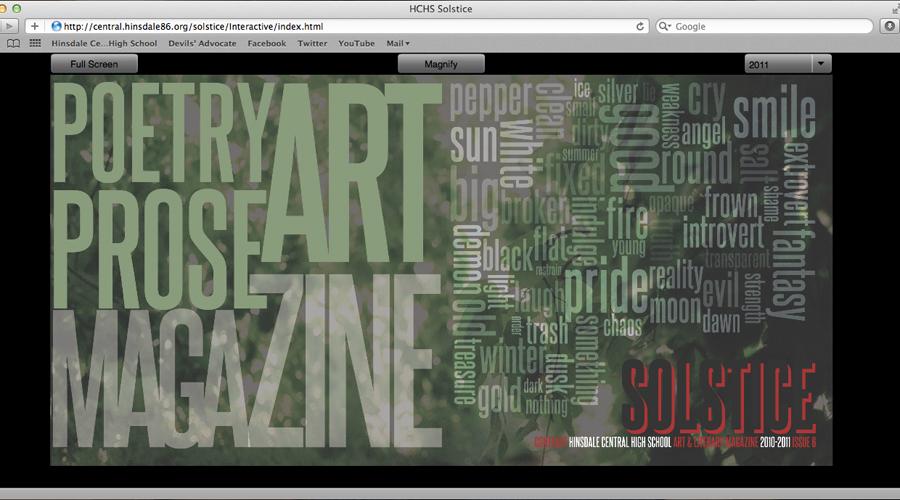 Many students are unaware that Solstice, Central’s literary magazine, has an online presence on the school website.  Solstice hopes that by being online, they can stay in touch with 21st century technology and reach more people.

“I think the goal [of having Solstice online] is to just reach as many people as possible.  In this 21st century media climate, I think publications are at a serious disadvantage if they’re not available online,” said Mr. Jim DiDomenico, English teacher and Solstice supervisor.

Solstice is not planning on changing much about its online format but is planning on eventually designing an iPhone app.  In the end however, DiDomenico believes that Solstice’s in-school distribution still defines the magazine.

“The way that we’ve distributed the physical Solstice magazine the past few years has allowed for a lot of more focus on the magazine.  When it was distributed with yearbook, it seemed to be a bit in El Diablo’s shadow.  Now that it’s distributed on its own day, Solstice has more opportunity to be recognized, “ DiDominico said. “However, the online version does accommodate those students who prefer the digital world.  It’s available to them on demand.  And, it’s available to any student, not just those who purchased a copy.  It also allows for any web visitor to Central’s homepage to view the magazine, obviously something we can’t do with the physical copies.”

Solstice’s members are also excited that the magazine is online.

“I like being in Solstice because I love being creative and I love anything that has to do with art. It’s fun to be able to see all the amazing talent Hinsdale Central has and to be able to present it to the school so everyone can enjoy it. Being online just allows more viewers to see the talent at Hinsdale Central,” said Suhana Thakarar, sophomore.

This year’s theme is simplicity, a change form the past few years’ bold themes. Students can still turn in submissions to solstice@hinsdale86.org until the end of first semester. Submissions include art, poetry or short stories.