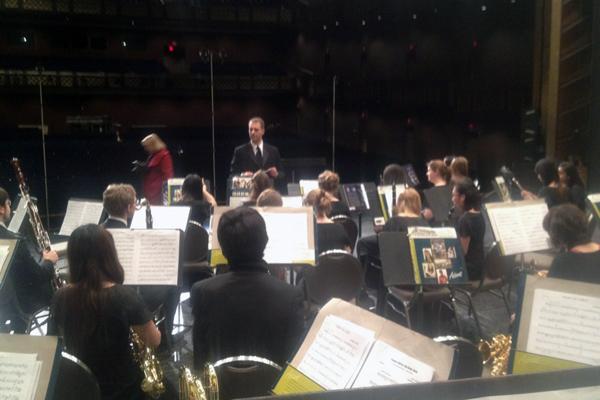 Hinsdale Central participants in the Winds Ensemble and the Chamber Choir travelled to Peoria where, after months of practice, they performed at the Illinois Music Educator’s Association (IMEA) recital on Friday, Jan. 27 and Saturday, Jan. 28.

Matt Kurinsky, director of the Winds Ensemble, believes that the whole trip was a great success. “Even the staff of the hotel where we stayed enjoyed our visit,” Kurinsky said.

Kurinsky did have some initial anxiety about the performance, though. “I was very nervous on Saturday because our audience was made up of band directors and other people that know music very well. But we got a lot of stuff right that we had been having trouble with. Even when we made mistakes, we made mistakes with skill,” Kurinsky said.

Dan Libera, senior, is a student who participates in both the Chamber Choir and the Winds Ensemble. He agrees with Kurinsky’s assessments of the recital. “Both the Winds and the Choir performances went really well, and I had a great time,” Libera said. “My favorite part of the trip was probably when I was able to check out a lot of booths at a music exposition for an hour. That or the pool party the choir had in the hotel after a dinner at Steak n’ Shake.”

Kurinsky feels that just about every student that went on this trip had the same kind of positive experience. Kurinsky said, “It was a really good time for everyone, I think. This includes me, as we received many positive reviews on our performance. We played difficult pieces that showed off our musical ability very well, and the band directors I talked to were blown away by our constant tempo in particular.”

The success of the IMEA recitals has started Kurinsky looking at other selective music festivals. “I’m strongly considering auditioning for the Superstate band competition, which is a rank above IMEA. And considering how well IMEA went, I’m really confident that we are able to get in,” said Kurinsky.