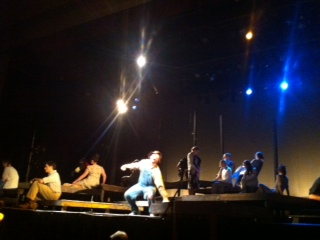 On Saturday, I went to see the play “The Rimers of Eldritch” performed by the Hinsdale Central Drama Department. Overall, the play was meaningful, suspenseful, and intense but confusing and hard to follow at times as there was little introduction or exposition to the story.

I was first enticed to watch the spring play by a YouTube video commercial which provided the premise of the play as a murder mystery in a small town. The video promised that “Rimers of Eldritch” would be harrowing and gripping, and the play definitely lived up to my expectations.

The setting of the play was Eldritch, Missouri, a once a prosperous coal mining community that turned into a ghost town. The simplicity and smallness of the town was reflected in the set design which was rather simple, consisting of only a wooden frame and some stairs. All of the characters were on stage for the duration of the play, with a spot light shining down on characters who were speaking at the time. This created the effect of viewing the play through the perspectives of the individual characters and their partial and faded recollections.

The play began with the trial of the murder of Skelly Manor, the local hermit, and the plot was furthered through the court testimonials at the trial and individual recollections by the characters.

The play jumped back and forth between characters, plots and even time, as the play switched between past and present. Because of everything that was happening all at the same time, it was hard to follow the plot as a viewer with little background knowledge or experience with the play. However, the acting was simply wonderful, with each actor and actress bringing their own unique character and story to light.

All of the events and characters came together in the last couple of scenes of the play. The last scenes were also the most powerful and charged scenes for me, as they revolved around the murder of Skelly Manor. Both scenes were acted out very well by the actors and actresses, and I felt the uneasiness as the events unfolded. The last scene when Skelly was shot was particularly moving as each of the characters passed around a gun and took turns shooting him. The scene emphasized the fact that the whole town had always been against Skelly (as he was the local hermit and an easy scapegoat) and shot him without thinking twice, despite his innocence.

All in all, the play was definitely one of the darker themed productions I have seen at Central but was nevertheless fascinating to watch especially for the performances by the actors.