Swift shakes off her country roots with new album 1989 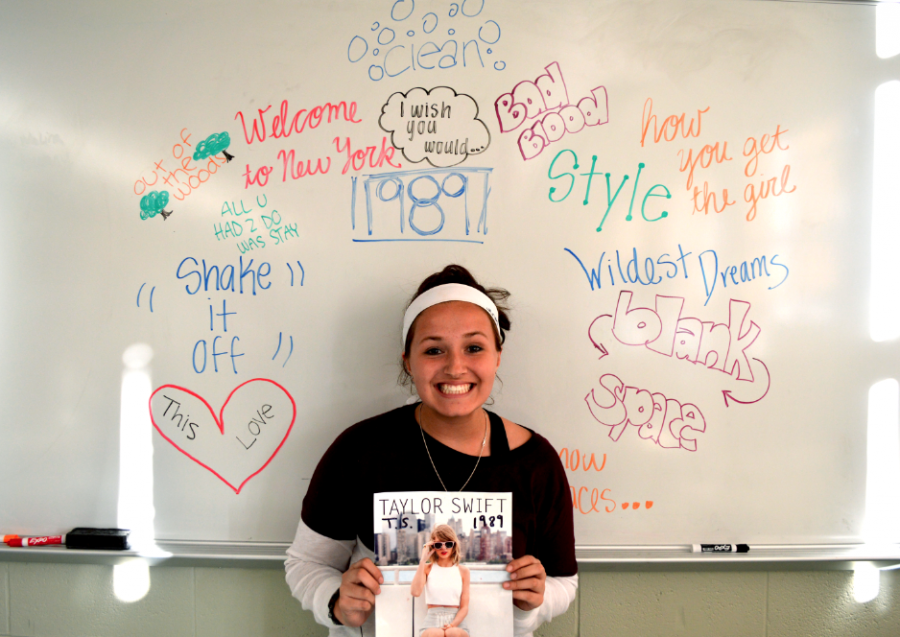 Brianna Ary, senior, stands under the song titles off of 1989.

Taylor Swift’s new album 1989 is making a splash at Central this month. Forgoing her old country sweetheart role, Swift has transitioned into a pop sensation.

“Personally I’m more of a pop fan than a country fan, so I’m stoked that she’s gone in that direction with her music,” said Monique Courtney, senior and long time fan.

“I was hesitant at first, but [the album has] definitely grown on me. I’ve even gotten some of my friends into her music,” said Megan Arbor, junior.

Although Swift’s music style is different this time around, fans are enjoying it just the same if not more.

“This album has been getting a ton of attention, because it’s different and fun to listen to,” said Ben Chapman, senior and two-year fan.

Favorite tracks on the album include “Blank Space,” “Wildest Dreams,” and “New Romantics”.

“[The songs] put me in a good mood because I love singing along to them,” Arbor said.

While her normally guitar and piano driven albums have switched to be more upbeat, the meaning and lyrics are still there. Each song connects with a different fan for different reasons.

“I don’t like the song ‘Welcome to New York,’ because it’s a little repetitive. I’m more of a fan of her slower songs,” Chapman said.

However, “Welcome to New York” is one of Courtney’s favorite songs.

When it comes to whether or not her future albums will be pop, fans remain hopeful that Swift doesn’t forget her country background.

“I became a fan of country Taylor Swift. I don’t think she’s going to be a pop artist for good, she’ll definitely make country songs again in the future,” Chapman said.

Since the fans can’t tell the future of Swift’s career, they’ll continue to enjoy the present with her new album 1989.

“I love this album. It’s by far her best one,” Courtney said.