Strings of her guitar 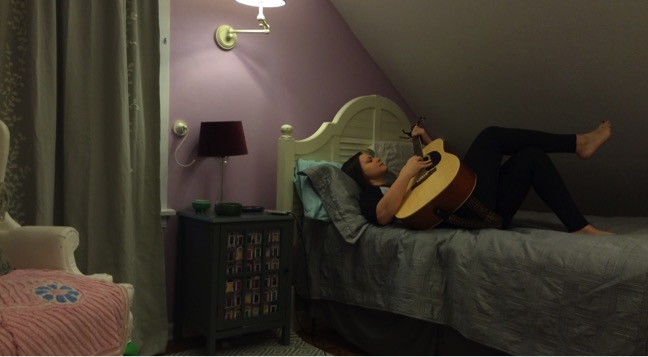 Sophomore Cami Comstock dreams of playing guitar in a small band in the future. She hopes to share her love for music with her peers.

The walls are hidden by four hanging guitars, Fitz and the Tantrums posters, and John Legend sketches. The song, Reflections by Misterwives echoes throughout the room. Cami kicks off her black Dr. Martins, jumps on her bed and starts strumming the bronze strings of her acoustic guitar to the beat.

Cami Comstock, sophomore, has been playing guitar since the fifth grade. Right now it’s just a hobby but she dreams of being in a band.

“I had a guitar but I didn’t know how to play it. So, my mom just sort of signed me up,” Comstock said.

Comstock takes lessons once a week at the Clarendon Hills Music Academy (CHMA). Her lessons are only 30 minutes but she practices every day.

“I have had two different guitar teachers since fifth grade. My teacher now is Evan Dunn. He is really cool and we have similar music interests,” Comstock said.

Comstock’s love for music drives her desire to play guitar. Artists such as Ed Sheeran, Walk the Moon, and One Direction inspire her to keep playing.

“I saw [Ed Sheeran] in concert. He performed Give Me Love with only his guitar and a loop pedal,” Comstock said. “It’s cool how he’s a one man band and can make all different kinds of music. I would love to play like him someday.”

Comstock idolizes Sheeran’s one man band style, but has different dreams for herself. She doesn’t see her career going big like Sheeran.

“It would be fun to be a guitarist in a small band like Misterwives someday,” Comstock said.

Comstock has done some single performances through CHMA.

“My most recent one was in June at the Union Church in Hinsdale,” Comstock said. “I enjoyed it but got a little nervous. I would rather perform casually in front of friends.”

Comstock’s taste in music is mostly alternative. Her all time favorite song to play is Roll the Bones by Shakey Graves.

“I love the way the notes are put together and the guitar starts off in a different tune so the sound is very distinct,” Comstock said. “The song started off really hard to learn but I kept practicing and eventually my fingers memorized the cords and now its very fun to play.”

Comstock’s upbeat and loving personality make her guitar skills even more worthwhile. Her friends love to hear her play and are interested in what she’s doing.

Lara Klein, sophomore and Comstock’s friend since the third grade, loves to hear Comstock play as well as sing along.

“I love [Cami]. She is really funny and can always put me in a good mood,” Klein said. “She also sends my friends and I funny videos of her new acoustic covers in our group chat.”

Klein vividly remembers her favorite memory of Comstock playing guitar. Klein and Comstock go to summer camp together each year.

“Our cabin was sitting on couches together and Cami started playing her guitar. Soon the entire cabin was singing along to House of Gold,” Klein said. “It was a cool moment because Cami looked so passionate and happy while playing.”

Comstock continues to learn a new song every week adding to her mass collection. She gets better at guitar every day and has even mastered the skill of playing behind her head.