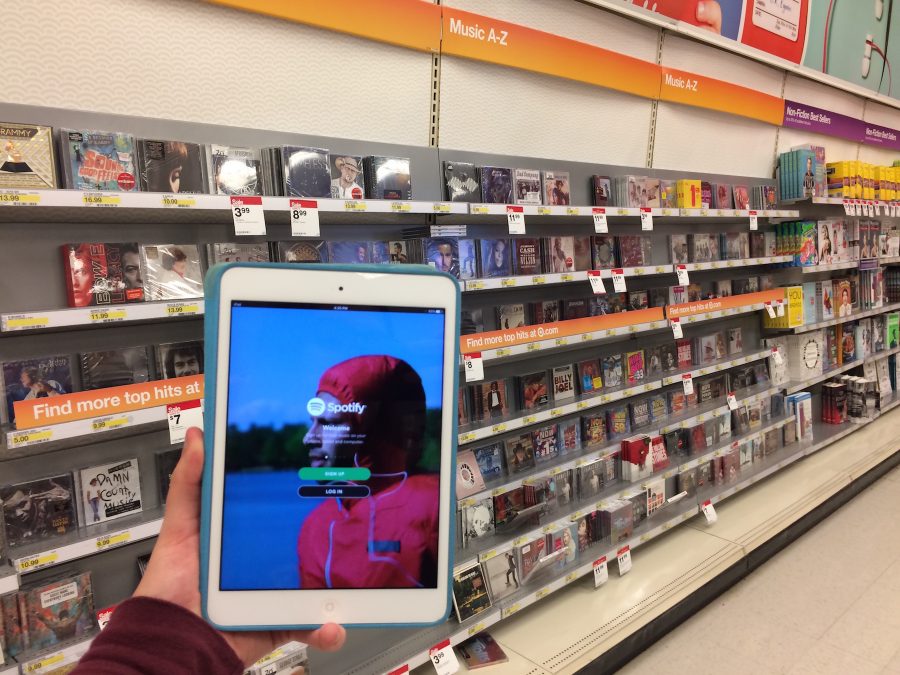 Even though December is arguably the busiest shopping month of the year, the CD section at Target completely lacks any customers. Many people attribute this to the rise of streaming services.

For the past few years, many people around the world have seemed to stop buying music due to the increasing amount of streaming services that can be found online. However, some still continue to buy music, whether it be out of tradition, respect for the artists, or other reasons.

Both parts of this debate can be seen, though the sides are a little skewed to favor streaming. In a survey of 100 students, 65 respondents said they only use streaming services to listen to music, and three said they only purchase their music.

“I prefer buying music because it doesn’t use data,” said Tyler Cashman, sophomore. “Also, it’s not my money, so it doesn’t matter for me.”

Other people also still buy music for the experience of hearing the scratch of a record or an album all the way through.

“My wife and I were just having this conversation with the idea that when you heard a song, you knew what the next song on the album was. But kids today, they buy one song by that artist,” said Mr. Robert Russo, social studies teacher. “That’s not how I listen to music. If I hear somebody, I want to hear what else they have to offer.”

After talking to many students, Mr. Russo’s idea of how students listen to music seems fairly accurate in comparison to everyone else.

“I prefer streaming because it’s free, and I can listen to whatever song I want at that moment,” said Ella Brewer, senior. “However, I do also listen to CDs in the car.”

The idea of having the world at one’s fingertips with the click of a button is something that students have grown up with, and it can be quite convenient when it comes to music.

“I use the streaming service Apple Music, which I prefer to buying music. By streaming music, I have access to tons of music without having to pay for all of it,” said Isabel Tamas, junior, who is a member of the Radio Club. “If you enjoy listening to different types of music, I would recommend streaming over buying music. Streaming provides access to any genre of music, while being significantly cheaper than frequently buying new music.”

The idea of cost really depends on how many new songs a person listens to per month. If it’s more than ten, streaming services are often more cost effective. There are even free streaming services like SoundCloud, YouTube, and Spotify many students use. However, although these services benefit the user, many of them don’t really benefit the artist.

This issue can be clearly seen when someone logs on to Spotify. None of Taylor Swift’s albums can be found because of disputes over royalty payments. The same thing almost happened with Apple Music, but Swift wrote the company a public letter asking for their sympathy, and they obliged. Now her music is on the service, and she even stars in some of their commercials.

Mr. Russo is a member of Chicago band The Loose Screws, and they’ve recorded a few songs. Though he doesn’t sell his music, he has many friends who do so he can see where Swift is coming from to an extent.

“From an artist’s standpoint, I get not wanting your music on a streaming service because you make your money through royalties,” Mr. Russo said. “I can see how that can be a detrimental thing to your career if you rely on that money.”

Although Mr. Russo himself still buys music, he sees the world going completely to streaming, so hopefully the many disputes over royalties are settled in the near future.

For more information from the survey of students, feel free to check out an infographic of the results on Piktochart.