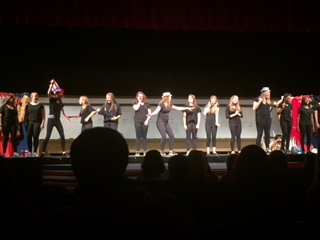 The freshman play used 15 actors, instead of the three called for in the original script.

From Thursday, Oct 11 through Saturday, Oct. 13 the Drama Club performed “The Complete History of America (Abridged)”. It was directed by English teacher Mrs. Susie Jaffe with Assistant directors Ellie Mather, junior, Michelle Brown, junior, Sarah Holland, junior, and Charlotte Froiland, junior. They performed in the auditorium at 7 p.m. on Oct. 11 and 5 p.m. on Oct 12-13.

While not as well known as other plays and musicals Drama Club has put on in the past, “The Complete History of America (Abridged)” is a comedy written by Adam Long, Austin Tichenor, and Reed Martin.

“This show was a great fit for a freshman play because it’s flexible for a large or small cast, based on the talent that comes to auditions,” Jaffe said.

The story begins with Amerigo Vespucci and his wife, who is calling him selfish for the fact that he has two continents named after himself. It went through American history touching on the major events such as the Civil War and World Wars. There were impersonations of different historical figures and people, including a Native American chief.

It is a satirical and at times cynical take on “600 years of American history in 6000 seconds.” The play often felt like many small skits put together, with each bringing different performances by the ensemble cast.

“It was really great [being a assistant director]. It was a very rewarding experience and it was nice to watch [the actors] grow from the first audition to the final show,” Mather said.

There were many costume changes throughout the play, with members of the cast playing multiple people throughout history.

“The show itself was difficult because there were so many scenes and we always had to be careful not to mess up the order of the show,” said Hannah Turek, freshman cast member. “[The] costume changes added an extra element of difficulty but it was also a really fun challenge.”

The original script called for only three cast members, however, it was reworked to fit the freshman play which called for 15 actors.

“Performing in the freshman play was a really cool experience and to work with a lot of talented other freshmen was really amazing,” Turek said.

This was the first high school play for all of the actors, causing some anxiety. However, because of the two hour rehearsals that occurred almost every day after school, the show went off without a hitch.

“I was really nervous [auditioning for the play] and actually messed up a lot of my words when I was reading a monologue and originally didn’t think I was going to make [the play],” Turek said.

Directing the freshmen actors was also a fulfilling experience for director Mrs. Jaffe.

“‘[The actors are] filled with ambition and excitement for their drama tenure at Central. For many, it is their first experience with the theater, so this show is a first taste of the culture, traditions, and passion of our program,” Jaffe said. “It was a rewarding experience, and I know it won’t be their last on our stage.”