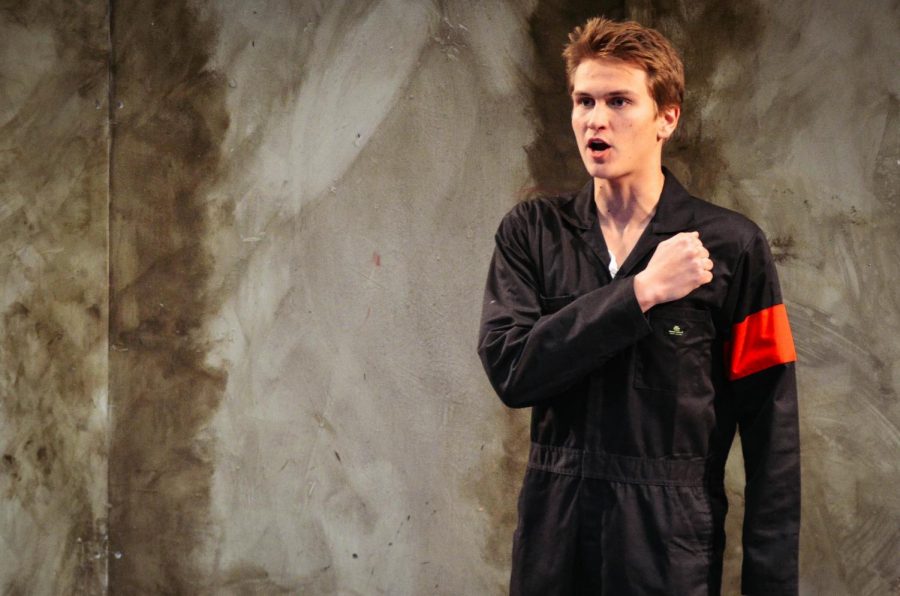 There were two casts for the play and each cast performed two shows, as the main cast was very small, consisting of only eight actors.

The Drama Club picked the play because it was a good challenge to the actors and it was very timely with the massive spread of media and technology today and the idea that “Big Brother”, or the idea of how the government is always watching. Orwell actually designed the fictional setting of “1984”, Oceania, to resemble modern America.

“The high urgency and life and death nature of [Oceania] is hard for actors. To live in this world takes a lot of energy,” Kostro said.

The three are employees at the Ministry of Truth, which is the department of the government of Oceania that is responsible for purging and reshaping the history and language. While the three seem like loyal members of the Party, the political party that supported Big Brother, the audience can tell from Winston’s skirmish behavior, that he secretly opposes the Party and “Big Brother”.

As a new party member, Julia (Allie Moreton, senior, and Tess Klygis, junior) is introduced, Winston suspects she is a spy who is going to report him for thought-crime, which is any rebellion to Big Brother. However, Julia professes she is in love with Winston and the two start a secret relationship, as love is an act of rebellion.

The two turn to their superior, O’Brien (Sean McCleary, senior, and Harry Priester, senior), who they suspect is a member of the Brotherhood, a rebellion organization against Big Brother. However, as the play progresses, Julia and Winston are captured by the Party from the hidden telescreen in their apartment and O’Brien, who ratted them out.

“The part where Julia and Winston get captured catches me off guard every time and it’s really cool looking with the projections and lights,” said Kayleigh Excell, junior member of the crew.

After being captured, Winston is tortured by O’Brien until he is a devoted Party member again. The play ends with Winston working in the Ministry of Truth once again as a loyal Party member.

The play was almost the same as the book, however, there were some differences. The book goes into a lot more detail, while the play is more simple and easier to understand for those who haven’t read the book.

“1984”‘s ability to catch the audience off guard was definitely one of the best parts of the play. When Winston and Julia were talking in their supposedly safe apartment, the cast jumped out and blue lights started flashing, with the screen now projected on the set. The scene elicited several gasps and even a scream from the audience.

“The scene seemed like an ordinary conversation between the couple but when the whole cast jumped out and shouted, my heart jumped and I grabbed my friend sitting next to me because I was so startled,” said Catherine Dolan, junior.

In the second part of the play, the actors really portrayed their characters well by screaming and shouting, especially during the scene where Winston is being tortured. The screams surely startled the audience and emphasized Winston’s insanity while he was being tortured.

The set accurately portrayed the dystopian feature of the play. The most interesting part of the set was the main wall that had the screen projected on it.

“The main feature is the wall that rises at the end of the show to reveal the entire cast,” Excell said.

The cast was also lined up in the back of the set and sitting on chairs. This made it easier for them to jump up in the scene where Winston and Julia are captured.

While the screen projected showed the sayings of the Party, such as “War is peace,” and the image of Big Brother, the music also enhanced the dystopian setting. With science-fiction-like music, the audience was constantly on their toes, waiting for another intense scene.