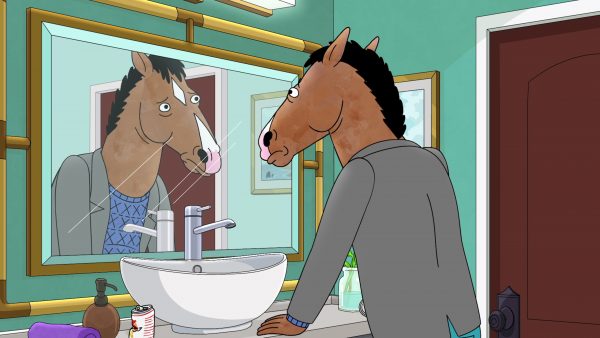 On Friday, Jan. 31, one of Netflix‘s first original series, “BoJack Horseman”, came to a close with its final six episodes. The show began in 2014 and lasted for six seasons before finding a conclusive ending.

“BoJack Horseman” follows a former sitcom star and washed-up Hollywood celebrity who the show is named after. BoJack is voiced by Will Arnett. While he’s portrayed as a well-meaning guy, BoJack tends to push away everybody who gets close to him due to his alcoholism, selfishness, and narcissism. While his actions make him easy to antagonize, the way his rough childhood, struggles with addiction and attempts to improve his life are depicted, allow you to sympathize with. It’s hard not to root for him in becoming a better individual.

“If I could describe “BoJack Horseman” briefly, it has a similar sense of humor as Rick and Morty, but with Rick’s nihilism cranked up to eleven,” said Sahil Shah, senior.

Alongside BoJack are supporting characters who represent different facets of mental illness. For example, his roommate Todd (voiced by Aaron Paul), was kicked out of his parents’ house for being too lazy and unintelligent, while his agent, a cat named Princess Carolyn (voiced by Amy Sedaris) is constantly stressed from working too hard. A fellow actor, a dog named Mr. Peanut Butter (voiced by Paul F. Tompkins), is seen as the opposite of BoJack, handling washed-up celebrity life in an optimistic, healthy way. Although optimistic Mr. Peanut Butter does have flaws that slowly reveal themselves over the course of the series.

Possibly the most relatable character is Diane (voiced by Alison Brie), an introverted author whose upbringing is the most human and empathetic of the bunch. The way all of these characters develop throughout the series is the biggest part of what makes it so engaging.

“Seeing all of these characters grow and change throughout the show is really interesting,” said Kathleen Ryndak, senior. “It’s something that I think few other cartoons have accomplished so well.”

The show has been widely praised for discussing mental illness in a more honest and direct way than most other shows, receiving overwhelmingly positive reviews from critics, and two Emmy nominations.

Despite its bleak depictions of serious topics, the show has a strong sense of humor, satirizing pop-culture with witty dialogue and a tongue-in-cheek setting. After all, it is about a talking horse.

The final season sees two journalists attempting to uncover some of BoJack’s previous unjust actions, even now that he’s become sober and is on a better path. It’s an effective critique of today’s “cancel culture” and lack of forgiveness that we have towards peoples’ past actions. We also get a satisfying conclusion for each of the supporting characters’ respective arcs. The show has a bittersweet ending, as BoJack makes amends with all of the main characters, but leaves a few things up for interpretation.

Overall, “BoJack Horseman” is one of the most well-written, well-paced, and heart-wrenching shows in modern television. Its creative methods of storytelling and cartoonish, yet realistic environment allow for some of the most standout episodes in current animation. It’s a show that’ll likely be talked about for decades to come, and its conclusion only further solidifies this.