Spice up your quarantine playlist with these albums 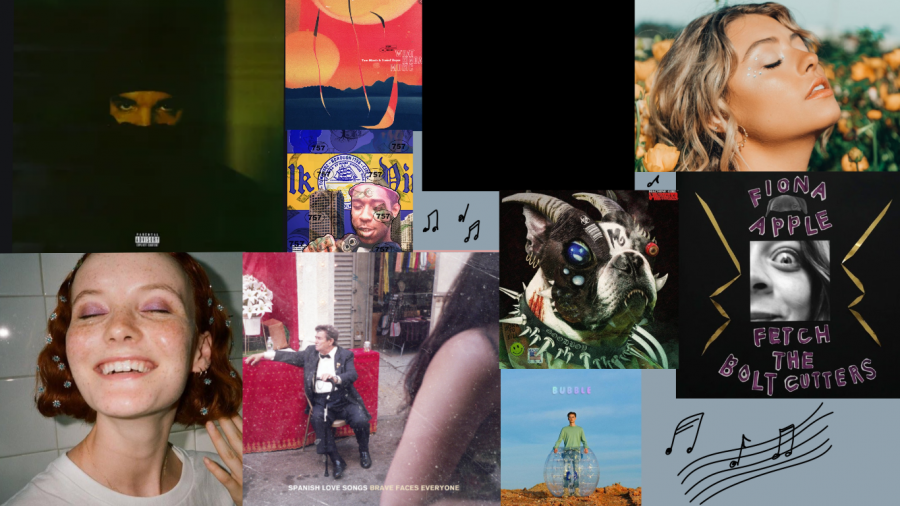 Here are some albums to add to your quarantine playlist.

Quarantine offers the chance to get more wrapped up in new genres of music and allows you to find a mix of songs that speak towards your personality.

“I think that many people spend time listening to music in quarantine because it is a constant in our lives,” said Gabi Camara, junior. “Music is one of the only things that we can still access and brings a sense of normalcy. It lifts peoples’ moods and can remind them that they’re not alone and makes them happier.”

While grabbing your favorite bag of chips, starting a new workout routine, or making a batch of cookies, mix up your quarantine music playlist with some of our latest favorite albums.
Natalia’s Picks:
Album: “What Kinda Music,” by Tom Misch and Yussef Dayes
Last month, Tom Misch and Yussef Dayes announced the release of their new album “What Kinda Music,” featuring modern hip-hop/jazz alternative music. As two very different artists, Misch and Dayes came together to collaborate on their new album by incorporating Misch’s R&B melodies and Dayes’ experimental jazz and drummer techniques. If you are interested in listening to some retro, laid-back tunes then you should add this album to your current quarantine playlist.


Album: “BUBBLE,” by Ant Saunders
Ant Saunders’s third single “Yellow Hearts” gained popularity on Tiktok as background audio to which users would film their partners. After many downloaded his song from hearing it on TikTok, Saunders signed with Arista Records as his fast-rising music career started to gain popularity. Released April 3, Saunders’s album features a mix of R&B/pop and rap verses that are soulful yet relaxing. The sounds behind his six tracks are very reminiscent of an old-school, R&B lovestruck vibe. The lyrics strongly link with Saunders’s stage of life — fresh out of high school and starting his path through life.


Album: “Dark Lane Demo Tapes,” by Drake
Drake’s mixtape is a compilation of songs that were either released on SoundCloud or leaked on the Internet. He released these songs before the release of his upcoming album, which is set to hit the markets in the summer of 2020. The mixtapes feature themes about the struggles of success and hint as to what his next album might sound like. His song “Toosie Slide” is more upbeat than other songs in the album and is perfect for working out at home. Some of the songs are a bit slower than I expected, but the mixtape is a good preface to listen to before his album comes out in the summer.


Album: “Golden,” by Annie O’Malley
O’Malley, former Central student, launched her music career after her senior year of high school by performing in Chicago in front of 20,000 people. Her Indie-pop style and upbeat electronic-pop acoustics serve as the backdrop for many of her songs. Her deceptively upbeat track “Island” is a reflection of a lonely time in her life and how she comes to terms with facts she can’t control. Her other song “Planet Golden” stands as an empowering pop song that speaks on how people should stop dwelling in the past and focus on the future.


Jack’s picks:
Album: “U-Void Synthesizer” by Machine Girl
Machine Girl has garnered a reputation as one of the biggest names on the extreme side of modern electronic music. Starting off as a solo project by Matthew Stephenson, records like “WLFGRL” and “Gemini” put him on the map for his technical, yet melodic approach to the worlds of breakbeat and footwork. Stephenson would later be joined by drummer Sean Kelly, and along with the addition of a new member came a whole new sound, adding abrasive vocal performances, and faster tempos.

“U-Void Synthesizer” is the third album Machine Girl has released in this style and is possibly their strongest one so far. It finds a middle ground between the ear-shattering insanity of recent albums and the danceable bliss of earlier records. It does this with a varied tracklist, ranging from the rapid madness of “Fully in It” and “Blood Magic,” to industrial dance bangers like “Scroll of Sorrow” and “Devil Speak.” Cuts like “The Fortress” and “Splatter!” even find a way to combine harsh grooves with more fruitful and upbeat moments. It’s a very tight tracklist, and my favorite electronic album of the year so far.


Album: “Fetch the Bolt Cutters” by Fiona Apple
It wouldn’t be a “best albums of 2020 so far” list without the one that critics lost their minds over the most. Being the only album to ever reach a perfect 100 on Metacritic, the hype surrounding this album, both before and after its release, is fascinating, but not too surprising. Being only the fifth album in Fiona Apple’s near 25-year career, she has built a reputation as one of the most consistent and boundary-pushing songwriters in modern music.

“Fetch the Bolt Cutters” sounds unlike anything else she’s made before, creating something that sounds grandiose yet homemade. The album doesn’t rely on the gimmick of poor production quality for the sake of sounding “DIY,” rather its compositions speak for themselves. There’s little in the way of instrumentation aside from a piano and percussion that sounds more like the clanking of random objects than conventional drumming. It’s able to do so much with so little and is all tied together by Fiona’s excellent vocal performances and powerful lyrics.

Favorite songs from the album: “For Her,” “Relay”


Album: “Brave Faces Everyone” by Spanish Love Songs
The third album from Los Angeles-based pop-punk group Spanish Love Songs is perhaps their most well-written and well-performed album so far. While I don’t usually find modern pop-punk and emo crossovers to be all that interesting, this album really won me over. It doesn’t do too much out of the ordinary in terms of chord progressions or song structures, but it makes up for that with some of the most genuinely devastating lyrics and passionate vocals to come from the genre in a long time.

The personal demons that are spoken upon by frontman Dylan Slocum come across as genuinely insurmountable and are emphasized on a grand-scale by the instrumentation. It’s a mental breakdown that’s huge and even hard to listen to at times, yet manages to work in catchy hooks to keep listeners invested.

Favorite songs from the album: “Self Destruction,” “Kick”


Album: “$ ~ CP WHERE I BE ~ $ #GETMONEYMUSIC” by Rodeoglo
While Rodeoglo has yet to build up a sizable number of full-length projects, his latest mixtape is the most interesting thing I’ve heard in hip-hop so far this year. It takes the well-established sounds of trap music and filters them through this abstract lense that’s as hard to pin down as it is enjoyable. When combined with elements of vaporwave and cloud rap, it creates this hazy, drugged-out atmosphere that most producers can only aspire towards.

On top of these beats are unconventional flows that thrive more off of vocal manipulation and strange mixing than anything you’d expect in the rap genre. The wide variety of styles, synthesizers, and samples keep each track refreshing and makes it feel larger than just the 18-minute mixtape that it is.


Album: “Black” by Tricot
The fourth album from Japanese math rock group Tricot is an absolute gem from start to finish. The way this group is able to incorporate off-kilter bass lines and unconventional rhythms into their songs while still being super catchy is something that countless other bands in the genre wish they could do. “Black” is maybe the group’s most consistently memorable album so far, with nearly every song having killer vocal refrains and grooves that are easy to get lost into.

While every song on the album is done in a similar style, the songwriting manages to stay refreshing throughout its 12 tracks. It might not be too different from what they’ve already done on previous albums, but that doesn’t take away from the album’s quality. In fact, with how much attention this album has received in the underground music community, I could see it being the one that introduces a ton of new fans to the band.