Mastering the art of cool

In last year’s yearbook, the college tee and sweatpants combo was deemed the most common outfit for guys. This year, that trend, or lack thereof, still stands. In the midst of the stagnant men’s fashion scene here at Central, I scoped out a few dudes who, refreshingly, have the confidence and willingness to put on anything but college t-shirts and sweatpants each morning. Guys, listen up, ‘cause these two know what they’re doing.

By mixing formal pieces, like collared shirts and cardigans, with more casual pieces, sophomore Griffin Brewer and freshman Tyler Rizzuto create eclectic outfits that are the perfect mix of classy and chill. The look that these outfits achieve is sheer, utter cool.

The secret is looking effortless, though ironically, that takes some effort. Pushing the cool factor too hard is an immediate turn off. Griffin and Tyler, using jeans and sneakers as the casual base of an outfit, counter by pairing them with basic pieces from the opposite end of the clothing spectrum, like classic button downs. Tyler wears a collegiate cardigan, which is an extremely polished piece. He reigns in the formality, however, by contrasting it with a very casual hat and sneakers.

When it comes to giving your style a personal flavor, look to outside sources for ideas. Griffin’s outfits have a distinct 50’s and 60’s vibe, and he draws inspiration from Ezra Koenig, the polished front man of Vampire Weekend. Don’t be afraid to open up a men’s fashion magazine either, guys!

Besides a cool look, dressing well has other benefits. Griffin says people generally respect him more when he looks put-together. “People are like ‘quiet down and listen to what that guy in the polo has to say, he looks like he knows what’s up,’” he said. And on the subject of style, he most certainly does. 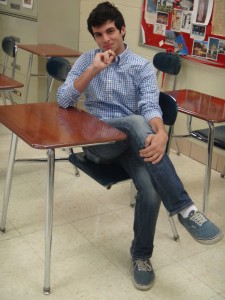