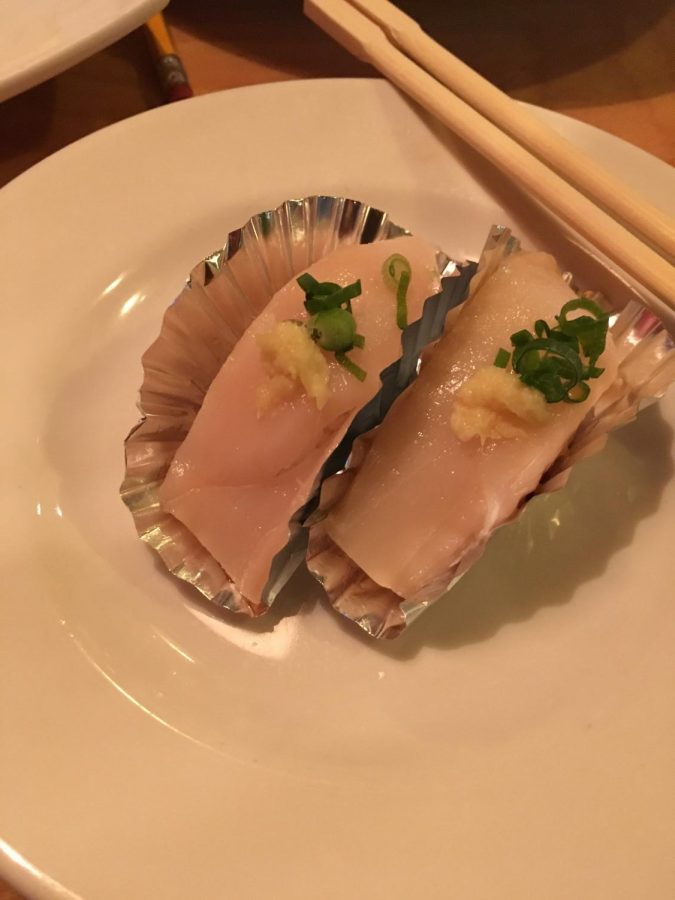 The super white tuna nigiri from Sushi House was buttery and topped with a dab of ginger.

Sushi House, located near Grill 89 in St. James Crossing, is a sushi bar with a soothing environment. Due to its proximity and prices, it’s a great place for students, faculty, and other community members to dine.

As I walked in the doors, I was aware of the dim, pleasant lighting contributing to the serene atmosphere. There were two especially low tables without seats, modeling traditional Japanese chabudai tables. Rather than having a hardwood seat, these tables had cushions to sit on, a much more comfortable alternative.

Behind the sushi bar were dishes with a myriad of fish types on long rectangular plates. The sushi chef was visibly hard at work, delicately crafting the rolls with an expertise I could imagine took years to acquire.

The host led me to a small, tidy table with a sushi and sashimi menu aside from the ordinary entrée menu. The main menu contained a variety of dishes, ranging from tempura and noodles to soups and rice dishes. I ordered a variety of sashimi and nigiri while my friend James Giltner, junior, ordered a tempura assortment. The fish on my dish was buttery, making the quality of the cut evident.

“The tempura was crisp and really good. I was surprised that sweet potato tempura was a thing,” Giltner said.

I also got to taste the tempura, which was incredibly light and flavorful. The dipping broth added a richness to the light pieces of fried sweet potato, cucumber, shrimp, and broccoli. The meal was reasonably priced for a sushi serving restaurant.

The meal ended with a dish of minty chocolate sticks, courtesy of the server. Despite its high quality food, the less formal atmosphere of Sushi House makes it perfect for any lunch or dinner.