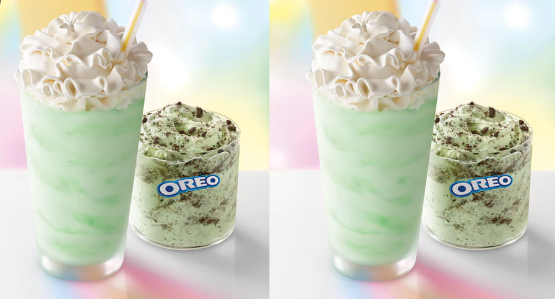 The Shamrock Shake and Shamrock McFlurry are brought back to celebrate St. Patrick's Day.

Every year in March, McDonald’s welcomes back a Shamrock Shake to celebrate St. Patrick’s Day on March 17 for the month of March.

The Shamrock Shake has been around since 1970, and for this year’s 50th anniversary, the Shamrock McFlurry was introduced to the public.

More than 60 million shakes have been sold since 1970, showing its popularity among the public. The shakes cost $2.69.

“The Shamrock Shake brings me pride and joy in the month of March, and since I’m Irish, they really get me in the St. Patrick’s day spirit,” said Sophie Biancalana, junior.

The regular Oreo McFlurry is an Oreo and vanilla ice cream blended together.

However, this year, McDonald’s took a turn and introduced a new item: Shamrock McFlurry. The ice cream consists of a mix of Oreo and mint. It costs $2.30 for a snack size and for 70 cents more, you could get a regular size. I ended up getting regular and thought it was for a decent price because of the amount they give you.

The Shamrock Shake is a very popular drink; however, the Shamrock McFlurry has mixed reviews about it.

I personally would not recommend the McFlurry because it tasted like toothpaste to me. It also had an aftertaste that made your mouth feel disgusting.

The Shamrock Shake did not fail to disappoint. I liked the mix between mint and vanilla, and I would recommend ordering that instead of the Shamrock McFlurry.

Some people think the Shamrock McFlurry is a nice alternative to a regular Oreo McFlurry because it is minty.

“The Shamrock McFlurry was pretty good. I think my biggest complaint would be that it wasn’t mixed very well. A lot of spots had a high concentration of the green syrup,” said Kathleen Ryndak, senior.

It was different and worth a taste, but I would definitely not have it again.

One of the better parts of the McFlurry and shake was the texture; it was smooth, creamy and very sweet. But other than that, the taste was not as good as I expected it to be.

On the other hand, I do recommend the Oreo Mcflurry because I like the consistency between the Oreo and vanilla.