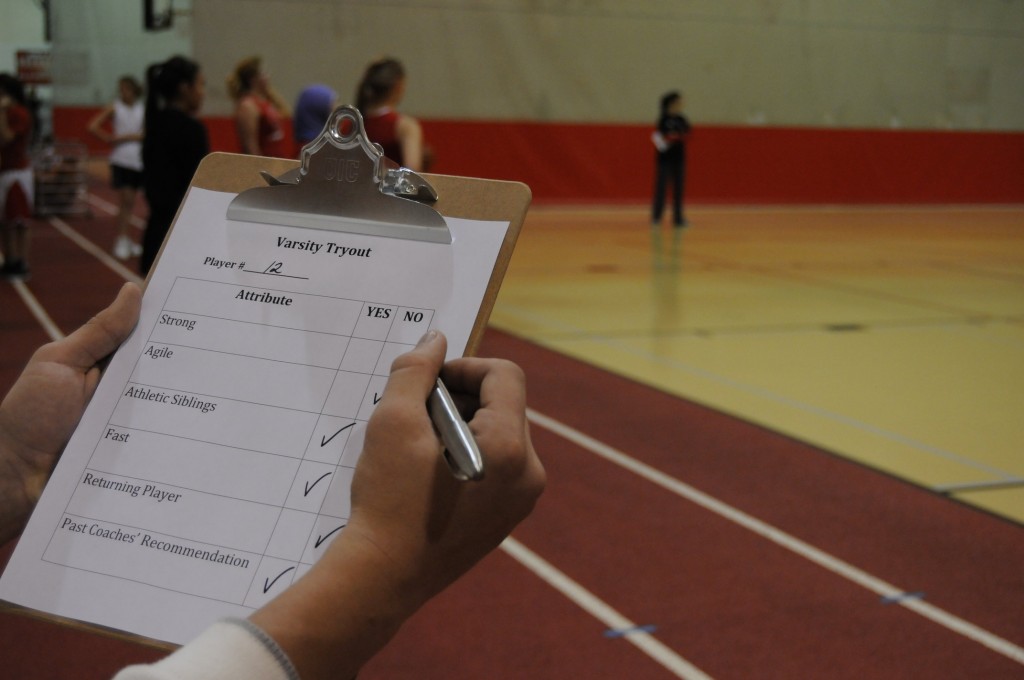 On August 10, as the soccer players take off their shin guards and cleats, nervous looks dart from face to face. Varsity soccer coach Michael Wiggins slowly walks up to the sweaty and exhausted group of juniors and seniors. For three days, each player has tried to perform to the best of his ability, both physically and mentally. They have sprinted against each other and have showcased their soccer abilities. For three days, the boys have been waiting for this moment.

Wiggins stops in front of the boys and begins to call out names, dividing them into three groups: varsity, junior varsity, and cut. Relief, confusion, or disappointment is illustrated on each of the boys’ faces as their name is called. The smiling face of a varsity player sharply contrasts with complete despair etched on another face. The beginning of a varsity season for some signals the end for others.

This is the classic scene of a sports tryout. The members of a sports team are selected by the evaluations of a coach, but the extent to which these evaluations, the tryouts, are reflective of athletic ability and team potential remains controversial. As objective as the coaches strive to make their tryouts, some students still strongly feel that they are not exactly as fair or equal as they should be.

“Sometimes, coaches make it obvious who their favorites are and who will make the team, so the other players usually feel like they aren›t being given a fair chance,” said Alex Kokenis, a sophomore who was a member of the girls basketball and girls badminton teams.

Many Central students feel the coaches approach tryouts already knowing who the best players are. “Coaches already kind of know who they want. Sometimes, they want the same people on varsity again, even though other people might do better at tryouts,” said Zoe Wong, sophomore, and member of the girls golf and girls bowling teams.

However, the athletic staff disagrees, and feels each coach at Central is fair in their evaluations of players. “Varsity coaches approach tryouts with a pretty good idea of who they want, but there are always students who surprise them,” said Paul Moretta, Central’s athletic director. “When students disagree with coaches over team selections, they are failing to realize that each coach has experience and is qualified to coach.”

Coaches at Central structure their tryouts so that they have the opportunity to fairly and equally see and evaluate the players. Tryouts are held for multiple days in order to accommodate for the fact that students cannot always play at their best every moment. “Having tryouts for several days helps us look for consistency in players, but are also for people who have bad days. It helps them be more confident, even if they are not doing as well as they would like,” Wiggins said.

Kristine Pohlman, head poms coach, believes that the dancers on her team need to earn their spot every time they try out. “You always hope that talented dancers try out, and for new talent to come in. But being on this team is a coveted position, and you have to earn it.” Pohlman said. The poms team runs tryouts differently than other sports. “It’s a long process,” Pohlman said. The girls come to a clinic two days before to learn core skills, because we always get some people who have never done it before.”  During the tryout, the girls are evaluated and given scores based on their body alignment, technique, memory, execution, and poise.

However, when it comes to choosing the team, the decision depends both on raw scores and individual factors. “Sometimes, we’ll talk to former coaches to get their opinion about players, but really each dancer needs to earn their position on the team,” Pohlman said. “ But also, even if a person performs poorly, if they have strong skills and we can see potential, they might still make it on the team. For me, it’s like grading a Spanish essay. Even though there may be errors, if I can tell that a student was taking risks and that they have talent, I would still give them a good grade.”

Varsity boys basketball coach Nick Latorre structures his tryouts so each student trying out has a clear picture of what he is looking for. Before the first day of tryouts, he hands out and goes over a sheet detailing the factors that go into team selection. “We are looking for kids with basketball ability, but they also have to be quality students. All of the students we select have potential to be a good teammate,” Latorre said.

Although Latorre said that no returning players are guaranteed a spot on the team the next year, Central students certainly do feel there is an advantage to being a returning player. It is difficult for coaches to remain completely unbiased throughout the duration of the tryout. “If a person was on the team before, and the coaches know them, they usually have an advantage. If they mess up, the coaches tend to be more lenient than with new people,” Wong said. Furthermore, students with older siblings that excel in a sport can have an advantage. Coaches can have expectations of siblings before they even see them play, according to students involved in athletics.

The way Wiggins deals with making cuts on the soccer team is by having a brief conversation with each person who tried out. “I have a face to face meeting with each player where I explain to them their strengths and weaknesses, where they fit on the team if they made it, and what they need to improve on if they did not,” Wiggins said. This is an attempt to keep the tryouts as fair as possible and make sure every player knows how his decision reflects their ability and performance at tryouts.

Pohlman also offers one-on-one time with each dancer to offer suggestions. Pohlman said, “We take notes during the tryouts, and whether the girls make it or not, these are goals that they can strive to improve on. We start with tryouts to build goals for the season.”

While some students argue that coaches only pick the best players and not the best team, various coaches both agreed and disagreed with this statement. As every sport demands different skills, each sport tryout is run differently. The way a coach approaches tryouts reflects the specific team’s needs. “For sports where the students compete individually such as tennis or badminton, coaches are picking the most skilled players,” Moretta said. “However, for a sport like basketball, the 10 most skilled players may be point guards, but a coach will not select a team of 10 point guards.”

Currently, one of the only things coaches and players can agree on is the strenuous nature of sports tryouts. “The worst day of the season is the day when a coach has to cut a kid,” Latorre said. Students sometimes struggle to focus and keep their athletic performance high during tryouts. “I’m always scared and nervous, and sometimes that messes me up and ruins my chances,” Kokenis said.

Also, nerves can play a large role in performance during tryouts. Kokenis said, “if someone is nervous, they might mess up at tryouts because they psyched themselves out.” Wong believes there is a lot more pressure during a sport tryout than during the competitions during the year. “Once you are on the team, it is usually not just about you doing well, but the team winning as a whole. And sometimes, when people really want to be on a team, nerves can shut them down, and they don’t play like they usually would,” Wong said.

On the other hand, Pohlman said, “Varsity girls should not be performing poorly at tryouts, and controlling nervousness is really a part of showmanship and poise. If they are nervous and perform poorly during tryouts, how can we know that they won’t be nervous and perform poorly on the field?” Wiggins agrees. “Varsity soccer players are expected to have certain level of ability,” Wiggins said.

In light of the relationship between coaches and students, the controversy over sports tryouts will continue to exist as long as students are disappointed or angered over not making a particular team.

Wiggins offers some advice about tryouts. “I tell my players to worry about the things they can control, like how often they play, and whether they are looking to improve, and not worry about things they can’t control, like the decisions the coaches made. I tell them they need to know they are doing the best the possibly can,” Wiggins said. When it comes to mental preparation, Pohlman encourages her dancers to practice. “When you have confidence in your abilities and skills, that comes out through your dancing,” Pohlman said.

Wong said, “During tryouts I concentrate and try to do my best. I practice a lot, but during tryouts I always tell myself that whatever happens, I tried my best, and that’s all that matters.”