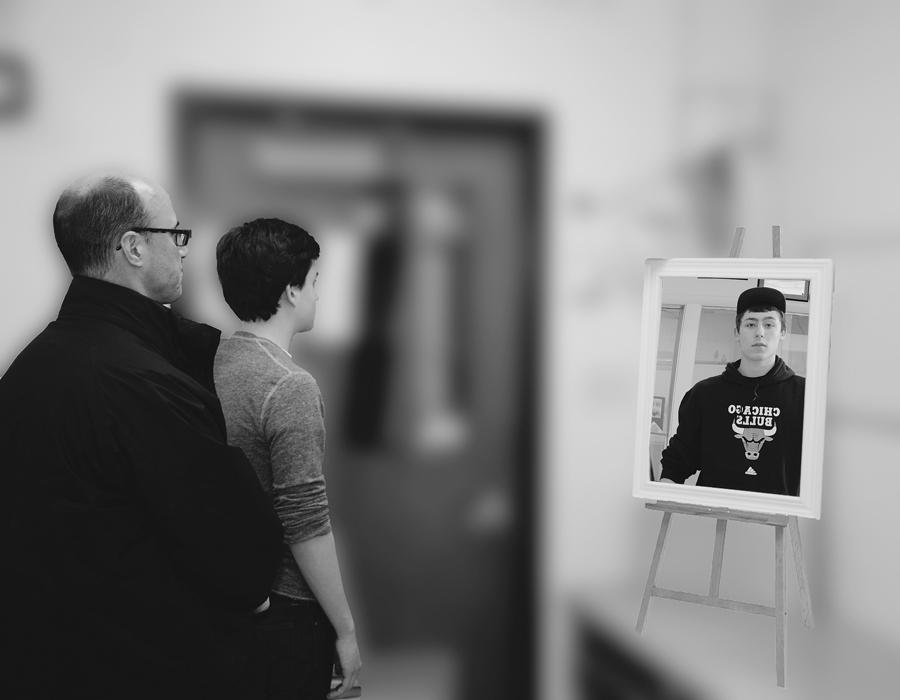 Mary Kuckertz, sophomore, is one of five sisters, three of whom are older and have gone through Central. When she started school here last year, she joined her sister Rita, then a senior, and was met with friendly faces of teachers and coaches who already knew Mary’s name, as well as the names of her sisters. On her first day of school sophomore year, Kuckertz was surprised to find that teachers asked personal questions about her sisters and immediately started conversations.

High school can be a difficult transition for many freshmen who enter a new school not knowing teachers, faculty, and other students. However, for many students like Kuckertz, the halls of Central are already familiar due to family members who came before them. Many teachers recognize these students as the siblings of their former students. It’s human nature to make associations and teachers are no exception. Associating a new student with their siblings happens all the time and has its advantages and disadvantages. “After teachers found out that I was related to my sisters, they we always very excited and asked me regularly how they were doing in college,” Kuckertz said.

According to Kuckertz, having older siblings go through Central before her definitely affected her high school experience. “It’s hard sometimes because I’m living in my sisters’ shadows, and people expect me to do the same things they did,” Kuckertz said. “All of my sisters were members of the varsity cross country team, and my sister Elaine set records that are still on the wall in the field house. It’s a lot to live up to.”

Mr. John Naisbitt, social studies teacher who has been teaching at Hinsdale Central about 12 years, says that he does have expectations for students of the same family. “I think there are some pretty strong expectations. Considering the success of their family, you think that they too will be successful,” Naisbitt said. “And that is probably a little unfair, but you certainly expect them to do well in your class considering their family, whether it’s the Portillos’, the Fullers’, the Buddigs’– when they come through, you certainly expect them to do well. But, you certainly don’t hold it against them if they struggle initially.”

Mr. Greg Hill, math teacher, has taught two generations of the Fuller family. “Interestingly, Jack Fuller [was] the first student I had who was a son of a former student. I taught Jack as a freshman and sophomore. I was waiting for that to happen after 30 years of teaching, and inevitably, it happened,” Hill said. Spencer Groenewold, junior, is a part of the Fuller family. “My brother Noah is a sophomore. My cousins Elle, Jack, Isabel, Madeline, and Riley Fuller also go to Central. My mom and aunts and uncles went, and two of my grandparents are also Central graduates” Groenewold said. Groenewold has enjoyed going to school with his family. “It’s nice, because I always have someone to talk to or to say hi to in the hallways,” Groenwold said. Having family members who know the school and know the teachers has also been a benefit for him.

“If I get a teacher that one of them had then they are able to give me advice about the class. Unfortunately, I sometimes go into a class with bias towards a teacher, and if they had one of my family members then they sometimes have bias toward me. However, after the first few weeks of school we get to know each other and the conflict resolves itself,” Groenewold said.

Mr. Tom Ludovice, science teacher, does notice some inter-family similarities. “The one thing I’ve always liked about the Fullers is that they’ve all been really hard workers, and their parents and aunts and uncles have always expected them to work hard outside of school, and that seems to be [a] commonality…and I’ve always enjoyed the family pressing that work ethic.” But if Ludovice was to have another Fuller in his class, it does not mean that he would expect the same work ethic of that student. “I would expect them to be who they are,” Ludovice said.

Ms. Christine Ferrone, psychology teacher says that, “Siblings share some genetics and share many aspects of the family environment. Perhaps people have expectations that there will be more similarities between siblings than between individuals who are not related,” Ferrone said.

Some students feel that teachers can have bias towards siblings of their previous students. “I’ve had some of the same teachers as my sisters. The ones who loved my sisters usually love me too, but there are some who didn’t particularly like my sisters and for that reason they don’t like me. If I have a teacher who liked my sister, I don’t get special treatment, but I have a little boost going into the class. If I have a teacher who didn’t like my sisters, then that makes the class more difficult for me,” Kuckertz said. “Coach McCabe, who is the varsity girls’ cross country coach, knew all of my sisters really well and helped them out a lot. Even though I haven’t had him as my coach, he is very nice to me and helps me out whenever I have questions or problems.”

The Buddig family also has extensive ties to Central. Bobby Buddig, senior, is the current class president and the last of five siblings to pass through Central’s halls. His mother Mary Ryan Buddig, PTO president from 2008-2011, is also a 1977 graduate of Central.

“I am the oldest of seven children who all attended Hinsdale Central, and I also had cousins who went there as well. Of my six siblings, five still live in the Hinsdale/Clarendon Hills area,” Mrs. Buddig said. Her husband’s family also went through Central. “I married Robert Buddig, also a Central graduate. He is one of five children, and four of them still live in the area as well,” she said.

Buddig loves the Hinsdale community and has enjoyed living near her family. “It’s been wonderful to have my children and my nieces and nephews grow up together. There are 31 total cousins in the Buddig family and all but five of them have graduated from Central,” Buddig said.  Naisbitt believes that having a family legacy has always been a positive experience. “I had both the Fullers and the Buddigs, and they are great people. The Buddigs helped out in a fundraiser I did for Afghanistan children, and they provided dried meat to send to the troops and the children. They were just incredibly giving and very nice people.

Hill thinks that family legacies are usually positive, but can be negative in some cases. “I think they can come in with confidence if their older sibling has had a good career and enjoyed it and they saw that and said, ‘You know, I am going to do the same.’ There are a lot of scenarios. An older sibling could have messed up a lot in high school and the younger sibling could have seen that and said, ‘You know, I want to do it right.’”

Ludovice disagrees that having large family legacies causes teachers to act differently, and he tries not to have expectations for younger siblings. “I try to treat [younger siblings] as individuals. Just like we have different students and different athletes, siblings are different, too. You can’t always expect them to be the same. And that wouldn’t be right because you have to collect the data about them and find out who they are. Some can be very similar, but I’ve have had siblings who are also very different,” Ludovice said.

Ferrone agrees. “Teachers, in particular, are aware of different learning styles and intelligences and try to vary classroom activities to maximize learning for all students,” Ferrone said. However, teachers might have the same high expectations for effort, according to Ferrone. “It is the job of parents and teachers to encourage young people to try their hardest so they don’t inadvertently close doors in the future,” Ferrone said.

Mrs. Gabric, a biology teacher who has been teaching at Central for close to 24 years, thinks there is a difference between “expecting” and “hoping.” “I don’t know if ‘expect’ is the right word. You would think it’s sort of like your own kids at home. If the older is [exceptional], you think it might happen.” But siblings can be brilliant in different ways she said.

Gabric does not remember when she showed bias or favoritism towards someone because they were a sibling of one of her students or player on her volleyball team, but she does know some coaches and teachers do that. “You can show favoritism for a gazillion things if you [choose]. ‘Oh your brother got an A, and you’re only two percent away.’ Or the other way around, ‘Your brother was so disrespectful; you must be bad too, so I’m going to give you a lower grade.’ You hope that doesn’t happen… I don’t hear a lot of that, but maybe I am just oblivious.”

Ludovice agrees, and personally tries not to have a bias against or towards students just because he liked or disliked their sibling. “Siblings want to be recognized for who they are. You start all over with [the sibling] and your expectations are based on what you learn about them as you go through the school year,” Ludovice said.

Gabric also thinks that having a family legacy at a school might be a good thing. “It’s like a closeness to the institution. It can be like that [at Central] too, because we’ve got not just brothers and sisters but also moms and dads. If your older brother was playing basketball here and you came here as a fourth or fifth grader, you come in with such a positive attitude, carrying the real Central spirit with you,” Gabric said. “You get that small school feeling here, too because of the multi-generations– people are staying here. It’s not just in and out and you never see them again. In that sense, I think it gives you a nice community feeling.”

Mrs. Buddig agreed, saying “I know plenty of people who I went to high school with who later moved back to the area. I love this town—it’s a very friendly family town and has been a wonderful place to raise children. Having graduates come back is wonderful because it fills the Central community with families who have a passion for the school and want to make it the best place that it can be.”