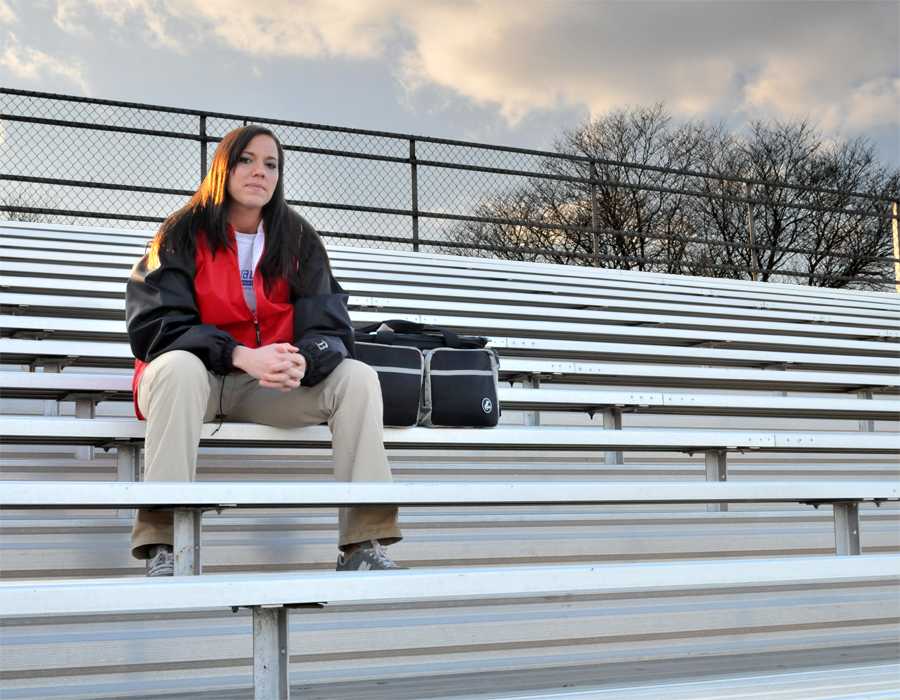 The last bell of the day sounds and students head out of their classrooms quickly. Within minutes of dismissal, the trainers’ office becomes crowded with athletes, all seeking medical help. Lying on the table, Tanner Makris, a member of the boys’ varsity basketball team, has a heating pad on his back. Seated against the wall, Cayley Brenk, a varsity gymnast, is having her ankle wrapped. And in the back of the office is a long distance runner on the boys’ track team, Zach Wilder, up to his neck in an ice bath. The trainers move around the office rapidly, diagnosing injuries in one corner and applying a heat pad in the other. After all athletic events are finished, the trainers lock up the office doors and head home, ready to face the same flood tomorrow.

Head trainer Keith VanSoelen and assistant trainers Michelle Novak and Sarah Carlson function as a team that can be utilized by athletes in and out of season to help with sports-related injuries. Students participating in gym class can also use the trainers if they get injured. The athletic trainers specialize in physical injury, and therefore refer students who have illnesses to the nurse.

The athletic trainers’ office, located in the basement near the boy’s locker room, also has equipment that can be used by all athletes, including rollers, ice machines, and the most popular option, ice baths. The trainers attend all athletic events to make sure someone is present in case someone on either team gets injured during a game or meet. They also float between practices while administering care to athletes in the trainers’ office.

Their purpose is to try to keep all athletes healthy, to prevent injury, and to help players recover as quickly as possible if they sustain and injury. The overall goal is to keep students playing their sport to the best of their ability, to keep them healthy throughout the season so they don’t have to get benched. The trainers help to work with the coaches and construct a healthy regiment to keep athletes healthy and in shape.

Michelle Novak, assistant athletic trainer, is new to Hinsdale Central this year. “Our job is to get students educated on why they get common aches and pains and become more knowledgeable on how to prevent and care for themselves. Prevention and care is our main job, and we help athletes avoid getting injuries and rehabilitate so they can get back to the game as soon as possible,” Novak said.

Sophomore Matt Santulli had an issue with his shins during lacrosse season last spring. But, with the help of the trainers, he treated the symptoms of this condition and continued playing all throughout the season.

“Not only are the trainers always there when you need help, but they also keep checking up on you to make sure you’re doing well,” Santulli said.

Simple steps taken by students, like icing after practice or rolling out your muscles, can help reduce pain caused by these conditions, and keep them from escalating to a point where they can’t participate. Some other common ailments the trainers see include sprained joints, joint soreness, pulled muscles, and back pain. Trainers can give solutions on how to alleviate these conditions so that every athlete can give their all without having to play through pain.

“The most common injury is probably ankle sprains,” Novak said. “We help the athletes recover by making sure they’re resting and not re-agitating the injury. After that, we put them through rehab to strengthen the recovering injury.” The athletic trainers use the acronym RICE (rest, ice, compression, elevation) to help athletes who have experienced minor injuries.

The trainers’ office opens at 2 p.m. and closes at 6:30 p.m., and is open Monday through Friday. During tenth period, athletes are even able to make appointments with trainers during free periods to go and get treatment during the day. The three trainers all circulate throughout practices to make sure that everything is running smoothly, and occasionally getting called to a specific practice if someone is seriously injured.

“When there are games, one of us goes and sits on the sidelines with our fully-stocked kits ready,” Novak said. “Besides caring for the athletes, we also look around before the game starts to make sure there are no obstructions that could possibly cause an injury.”

Throughout the game, the trainers are constantly watching and are on the look out to make sure athletes from both teams are healthy.

Gretta Richter, a junior on varsity cheerleading and jv lacrosse, is very familiar with the trainers. Richter has used the trainers on numerous occasions, including ankle, head, back, and neck injuries. The trainers even treated her most recent injury, a concussion due to a fall in cheerleading.

“The trainers were really great throughout my entire injury,” Richter said. “They diagnosed the concussion right after I fell at the game, and from then on they helped me recover.”

According to Richter, one of the best things about the trainer is that they monitor the athletes throughout their recovery.

“The trainers helped me a lot by putting me through physical therapy for my neck and back after my concussion; they’re always looking out for the athlete’s best interest, which is a really good thing,” Richter said.

Novak and Carlson believe concussions are the most serious injuries that come into the training room, seeing as they are considered a traumatic injury.

“We currently have a couple of pretty serious concussion cases that we’re treating,” Novak said. “One athlete was concussed, and I tried to approach him and he reacted aggressively because of his head trauma.”

Other athletes, such as junior Nick Piker, a member of the varsity football team and the boys’ track team, agree that the trainers are very good about not allowing team members to return to playing their sport until they’re fully recovered.

“Since the trainers main goal is to help the athletes in the school play as best as they can, they make sure that they are patient and wait until the athlete is ready to return to practicing,” Piker said.

Piker also believes that along with being effective concerning medical diagnosis and treatment, the trainers are also kind and fun people to be around.

“The trainers are always there when you need them, but they’re also really charismatic and interesting people to be around,” Piker said. “I think what makes them so awesome is that they are all funny and nice, but they also are very smart and know what they’re doing.”

Sophomore Ben Stefani is another example of the trainers aiding athletes with their injuries.

“Freshman year I hurt my neck during a game and I could barely move it. The trainers gave me treatment every day and had me completely ready for the next game,” Stefani said.

Athletes who use the trainer often are able to avoid some injuries that are common in sports due to basic impact that is experienced in most athletic activities, an example being shin splints. Assistant athletic trainer Sarah Carlson knows simple steps that athletes can take so they can stay in the game without injury.

“The important things are eating healthy, mainly protein and carbohydrates to offset what you burn in practice, getting enough sleep, and doing off season conditioning to prevent injury,” Carlson said. “Listen to your body; it’ll tell you when you’ve had enough.”