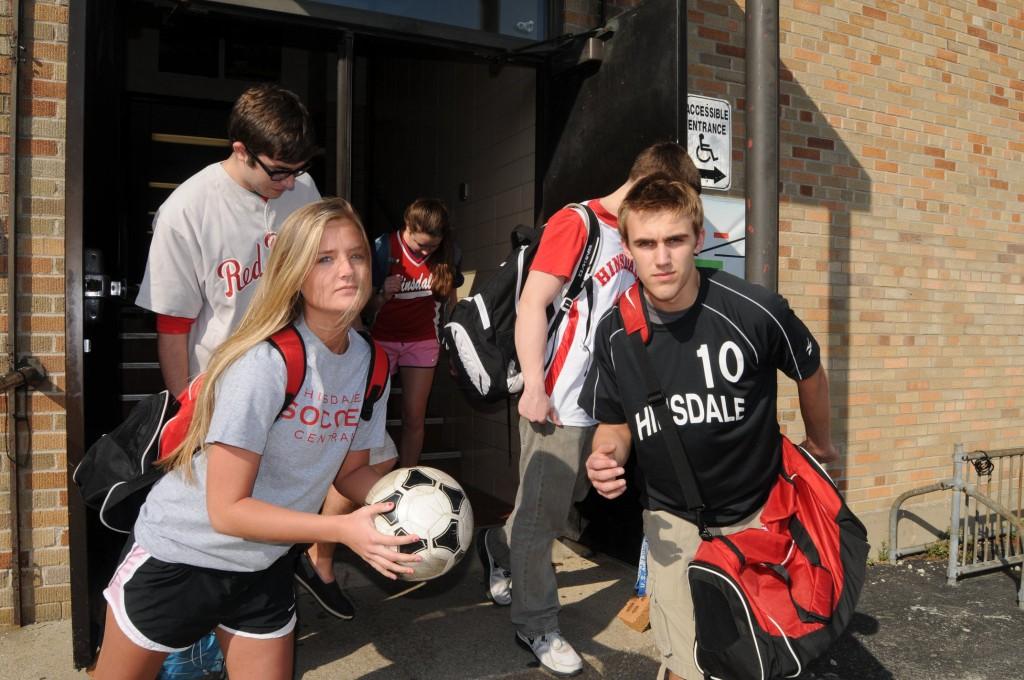 Jacqueline Han, junior, doesn’t end her day with school; instead she leaves early to ice skate competitively. During her regular P.E. period, she is skating at Twin Rinks in Buffalo Grove, a 35 minute drive from the school. For Han, the ice is only open until 5:30 p.m., so she leaves school early in order for her to get the training hours she needs.  Han normally skates 15 or more hours per week, so having the extra time after school is vital to her commitment. Even with the P.E. exemption she sometimes doesn’t get home until 6:30 or 8:00 p.m. depending on whether she has other activities to attend.

For the 2012-2013 school year, the Physical Education Waiver policy will change for the elite athletes.  Due to a change in Illinois state law, high schools will no longer grant quarter, semester, and year-long special Physical Education waivers for elite athletes who compete outside of school. The current policy allows students to request exemptions from guidance, and the only prerequisite is that students applying must be nationally ranked. Then the administration decides whether the student will be exempted or not.

Principal McGrory thinks the reason for the change is an emphasis on consistency and fairness.  “The value placed on fairness must be maintained,” McGrory said.

Han does not believe that the change in policy is a good idea because athletes depend on getting out of school early in order to be able to practice their sports.  “The [current] policy is fair because athletes are already committing multiple hours to train and therefore, don’t really need P.E.,” Han said.

A benefit to the policy change that McGrory sees is that students who participate in P.E. are given the opportunity to interact with students they wouldn’t meet in their core classes.  Even though elite athletes are benefiting from exempting from P.E.,  they are missing out on other activities around Central. Many activites occur after the school day whether it’s meeting with a teacher or participating in a club meeting.

Ms. Julie Motluck, sophomore girls’ volleyball coach and Spanish teacher, believes that as long as students are not missing a core course during the day, then they should be allowed to leave early. At the same time, Motluck acknowledges that elite athletes are missing out on high school experiences.  In her opinion, this new policy will help athletes balance their time more equally between activities and academics.

At the same time,  this new policy could have the opposite effect. “I know for me it makes going toskating increasingly difficult.  Personally, I am benefiting from getting out of school early just based on how much time I can committ to skating,” Han said.

Athletes on Central’s varsity sports teams share a similar time crunch and are happy that the new policy will still allow them to exempt from P.E. as long as they attend a daily study during the exempted period. This new policy affects only those athletes who participate in sports outside of school. But they do have many have suggestions on how the current policy could be improved. Unfortunatly, as this is a state law, improvments cannot be brought to adminstration or the school board.

Tiffany Chen, a junior on the varsity tennis team, exempts from P.E. for a first period study hall.  “I think the policy is fair because most varsity athletes spend time in the off season training, which tends to eat up a lot of time,” Chen said.  Chen also thinks since athletes have time to train in their individual sport participating in P.E. won’t really help them in the end.

Other students like Meghan Schick, sophomore on the varsity soccer team, believe that the policy is fair.  “I think that varsity athletics require a great time commitment, and it makes sense that juniors and seniors don’t need to participate in P.E. They get a ton of exercise in their sport, so why should they have to do P.E.?” said Schick.

Schick played varsity soccer last year as a freshman and thought a study hall could have helped her balance her academics and sports.  “As a sophomore who was on varsity also as a freshman, I think they should also offer it to underclassmen because sometimes it can be overwhelming,” said Schick.

Haleigh Monyek, a sophomore on varsity cheerleading and track, thinks that athletes do not need to leave school early because they would be coming back for practice in an hour and she feels the athletes should utilize their time properly. “Students who miss first period study hall to sleep aren’t fully utilizing the important time that they are given to get work done,” she said.

Next year, elite athletes will have to adjust their schedules to allow for a full day of school complete with a physical education class. Students will have t o be on top of their games both athletically and academically in order to maintain their current schedules. This will force them to be more organized with their time and to be more involved at the school.  The new law will create uniformity and fairness throughout Illinois’ school districts. With that said, varsity athletes will continue to enjoy the benefits of being exempt from physical education.