Solstice eclipses all others 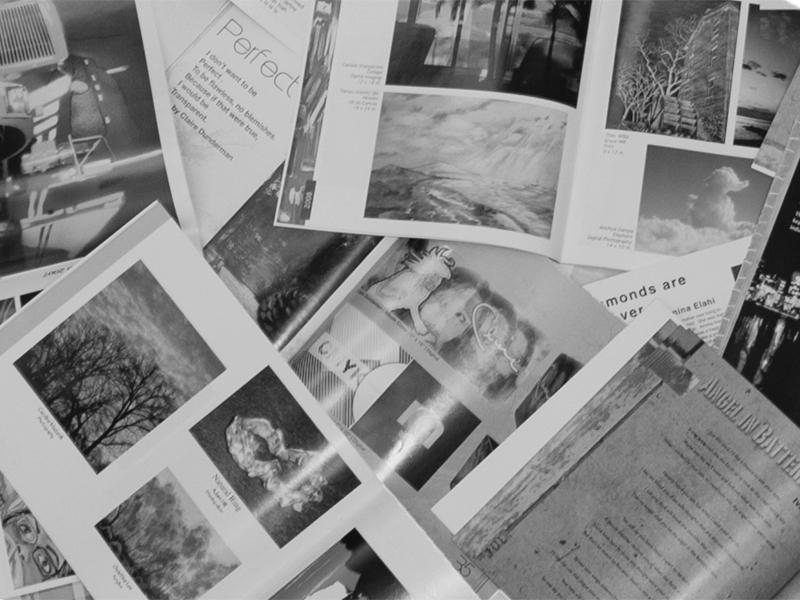 It’s a Wednesday afternoon, and Room 15 is bustling with Solstice members. Some students chat in small groups, some are glued to the screens of the many iMacs in the room, and some are deep in conversation with the design advisor about scheduling. There is no doubt that Solstice is in production.

Central’s art and literary magazine, Solstice, is nearing completion of its 2012 issue. The magazine was sent to be printed on April 13, and is scheduled to be distributed to students on May 11.

Solstice’s work always begins well before the April deadline. First semester usually consists of recruiting new members, promoting the club, andhosting monthly meetings. The most important part of the first half of the year for Solstice is gathering the art and writing submitted by students and choosing which ones will be in the magazine.

“Choosing the pieces is a collective decision-making process. All of the submissions are looked at anonymously, and the club decides which they believe are Solstice-worthy,” said Mr. Jim DiDomenico, English teacher and literary advisor. “It is a very hard decision to make. The students have a hard time, and often have to keep certain pieces around for a while to decide.”

This year’s student literary editor, Charlotte Kanzler, junior, said, “It’s always hard to choose what makes it in, and this year was no exception.” One of the things Kanzler most enjoys about Solstice is the fact that there are no real guidelines for the submissions. “One of the advantages of Solstice is that submissions, especially for the literary half, do not have to be assignments or essays – this isn’t like the nonfiction anthology,” Kanzler said. “Solstice gives students a chance to write about a topic that interests and inspires them, in whatever format suits them best, and be recognized for it.”

DiDomenico has been Solstice’s literary advisor for the past three years. “I took the position after Mrs. Richardson handed it over to me. I had always been interested in art and creative writing, so I thought it would be a good fit,” DiDomenico said.

In addition to picking new pieces for the magazine, the club must also come up with a different theme each year. This year the theme is simplicity,which is a change from the busier themes of previous years. “The theme of Solstice is usually mostly reflected in the design elements of the magazine itself,such as the cover and the layout. This year we’re going for a sleek, less-is-more kind of feel,” Kanzler said.

This theme is especially important to Kris Dale, senior, who is Solstice’s chief design editor. “We wanted to streamline it, to make it sleek and easy to read. By keeping it simple, we’ve been able to stay ahead of schedule while still making an awesome magazine,” Dale said.

Towards the end of the first semester, after most of the submissions are in, members begin training with computer programs like Photoshop and Illustrator that they use to bring the magazine to life. Once second semester starts, the work begins to pick up with weekly meetings and more designing. By the last week before the deadline, the club meets as many days as the members need to get everything finished and perfected.

Both Kanzler and Dale have been involved with Solstice for two years and have thoroughly enjoyed it. “I like Solstice because it gives me the opportunity to be creative. I also enjoy all the work that goes into making a published product,” Dale said.

“I’ve always loved to draw and write, so of course Solstice seemed like the perfect combination of the two,” Kanzler said. “I love to discuss and analyze literature, and my job as editor combines a lot of that.”

Though Solstice has been a long-standing tradition at Central, Mrs. Pat Potokar, teacher and the design advisor, acknowledges that the format has drastically changed in the past few years to focus more on the design of the magazine.

“Solstice used to be much simpler. It was in black and white, and the creation of  it was a matter of compiling the pieces of art and writing and sending it to the printer. Now, there is a greater emphasis on design. The design editors design the layouts. It’s more contemporary, clean, readable, and space efficient,” Potokar said.

Potokar became the design advisor six years ago and has enjoyed it ever since. “I have a background in advertising and photography, and I teach the advertising and digital imaging classes. I have also been yearbook advisor, so this seemed like a natural fit,” Potokar said.

Another recent change is the addition of an online version of Solstice. The last three issues of the magazine were published on Central’s website in addition to distributing printed copies.

“I believe that being online opens up a new avenue of media. People without a copy will still get to see the magazine. It is also good PR for the school,” Potokar said.

Thanks to its staff, Solstice has won a variety of awards over the years for its publication. “We’ve won gold in the Scholastic competition for art and literary magazines from 2009-2011, and silver the three years before that. In addition, in 2010 Solstice won 1st place in the American Scholastic competition, as well as special merit for Best Concept. Our magazine was formatted in 3D that year, which was pretty cool,” Kanzler said.

“I have actually taken extra copies to businesses, and [people] are very impressed by what the students have done with the publication,” Potokar said.

Both DiDomenico and Potokar are very excited for Solstice to come out and look forward to showcasing the talent of Central. “Solstice is a celebration of all the artistic and literary talent in our school,” Potokar said.

“Solstice is a reflection of the student body, and this school is full of talent. It’s always exciting to see your name, or the names of friends, in print for something you’ve created and are proud of. Hopefully it will be as fun to read as it was to put together!” Kanzler said.