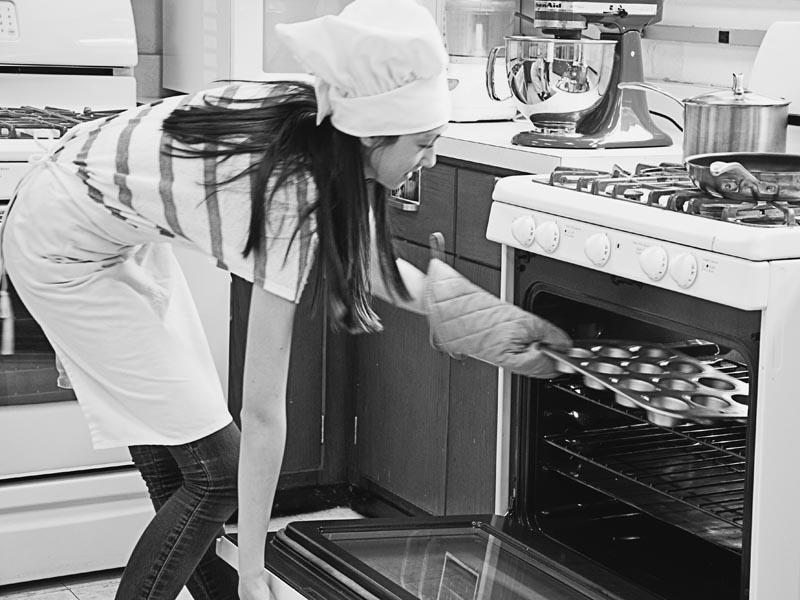 Every Friday night, you’ll find senior Sam Burnett is in the same place. He isn’t out with his friends or seeing a movie like nearly every other teenager in the country, but instead he is in one of the places you’d least expect: the kitchen. He is honing his culinary talent by cooking requested recipes for his friends.

A couple of years ago, Burnett came up with the idea to get a couple of his closest friends together to form the FNDC, or the Friday Night Dinner Crew. Every end of the school week he makes a new recipe to serve his family and friends.

Through this Friday night cooking tradition, Burnett has been able to make strong bonds with his friends and, just as importantly, to cook some great food.

Burnett was influenced to try cooking by his family. “I first got interested in cooking watching my eldest sister, Katie, cook when she was in high school. She would cook for herself and the family and I would sit and just watch her. I would only ask one or two questions when she was cooking, but that’s when I knew that I wanted to be able to cook,” Burnett said.

Burnett then began to actively expand his culinary knowledge, building a foundation for his skill. “I started to read the label of spice bottles because it tells you what the spice is and what food it goes well with. I also started watching the Food Network to learn what the professionals are doing with food,” Burnett said.

Eventually Burnett started printing off recipes he found online and even created some of his own recipes.

“One weekend sophomore year I started my cookbook,” Burnett said. “It’s in a Five-Star, blue notebook, and is titled ‘Cookbook.’ It consists of recipes I find online, my own recipes, and recipes given to me from my sister or grandmother. It is not organized, but has a rating system that my friend Ben Cherry started. My friends will put a symbol on the top of the page saying if they like the recipe or not.”

As a member of a baseball team, Burnett enjoys cooking for his teammates. “It serves as a bonding experience,” Burnett said. Burnett continues to share his talent with others, cooking especially for his friends and family.

For Burnett, cooking will remain a hobby, as he will not be pursuing it seriously in college.

Burnett’s interest in the culinary field can also be found in many other students throughout Central.

For juniors Jillian Prochot and Grace Cook, their interest in the culinary field began when they were introduced to the cooking channel a few years ago. “I guess the first time I really became motivated to try baking was when I started watching shows like Ace of Cakes or the Food Network Challenge,” Prochot said.

“We started baking cakes for our family and friends and we just got better and better at decorating cakes,” Cook said. At first, both Prochot and Cook dreamed of opening up their own bakery one day. Although the girls’ interest in baking isn’t as strong as it once was, they still love the feeling of cooking a cake for a family member and seeing the positive reactions.

Prochot explained that her interest in baking was fueled by her desire to make people happy, and making cakes was one way to do just that. “I once made a cake for my uncle’s birthday. I spent a lot of work on it, but the expression on his face when he saw it made up for all the effort I put into it,” Prochot said.

Natalie Vaughan, sophomore, also has culinary talent that she likes to share. Vaughan has been making food for so long she can’t remember when she first started.

“I’ve always liked to cook and bake ever since I was little. I would want to help out as much as I could whenever someone else was making something,” Vaughan said.

Vaughan enjoys making desserts over making meals. Currently on the top of her recipe list are salted caramel cupcakes. “My family and friends loved them,” Vaughan said. “I made another batch this past weekend because everyone loved them so much, so it’s my favorite recipe.”

Vaughan’s family also admires her work. Vaughan’s mother said, “[She’s] a great baker and is always trying new recipes. It was only a matter of time before she took over the kitchen.” Vaughan greatly appreciates the encouragement she receives from her family. Hearing her mother praise her ability is “the highlight of her cooking experience.”

This past summer, Vaughan also shared some of her desserts by selling them to people around town. Vaughan said, “It was fun because I had time, but I don’t think I could continue cooking and baking in the future as a career. I will keep cooking in the future for sure, though.”

These students not only have their talent and love for cooking in common, but also their desire to share the food they make with the people closest to them. From hosting gatherings such as the FNDC to sharing baked goods with family members to trying out new recipes, these chefs show that cooking good food isn’t just something for themselves, but something to be shared.