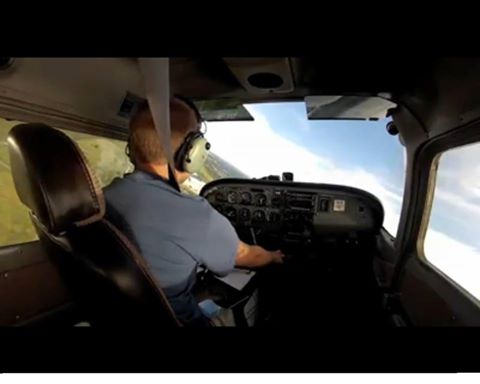 Zachary Wilder, senior, pushes his aviator sunglasses up as he concentrates on doing math in the notebook on his lap. However, this math work isn’t for school. It’s in preparation for Wilder’s first solo flight on a Cessna 172 R.

“The hardest part about flying is probably all the math calculations and procedures that go with preparing for a flight. You need to understand a weather briefing, altitude situations, different speeds for different temperatures, and what not. All of it is completely logical, but it takes a while to become rehearsed in the thinking process that’s appropriate to flying,” Wilder said.

Math calculations aren’t the only preparations required for a solo flight though. In order to embark on his first solo flight, Wilder has had to undergo extensive hours of training.

“To get to this point in my flying career, I’ve had to do a lot, including two cross country flights, three hours of hood time, 40 hours of total flight time, nearly 100 hours of ground school, and a lot of studying,” Wilder said.

Wilder has had to study everything from the mechanics of plane engines and instruments to calculating the airplanes weight to communicating with air traffic control. On average, Wilder spends four hours a week working toward his license during the school year. During the summer, that commitment jumps to 15 hours a week. For Wilder, the joy of flying is worth the hours.

“My first solo flight was out of this world. The sense of accomplishment that came with flying a plane by myself, and knowing that I did something that 99 percent of American teenagers can’t say they have done, is a feeling that no one can take away from me,” Wilder said.

Still, the work is not finished. In order to receive his license, Wilder must fly more solo hours in addition to passing a written test and a check ride with a FAA certified instructor.

“The instructor will run me through various procedures for around two hours, and if I do close to all of them correctly and well, the very minute we land, the instructor will hand over my license and I will officially be certified as a VFR Private Pilot,” Wilder said.

Despite his commitment and enthusiasm for flying, which began when Wilder was young, and only grew when he attended an aeronautics camp at the University of Illinois and decided to begin attending the American Flyers school at DuPage Airport, Wilder does not plan on pursuing a career in aviation.

“I do not plan on flying as a career, however I do plan on continuing to get more licenses so I can fly bigger and better planes,” Wilder said.