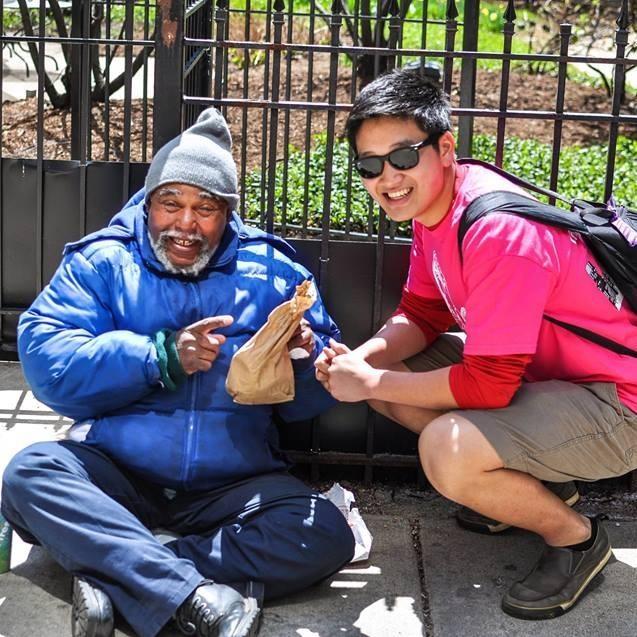 Senior Hoyoon Kim gives a brown bag away in Chicago during the spring event in 2014.

Three years ago, Hoseuk Kim, while interning at a Chicago Public School, grabbed lunch near his office and brought back whatever leftovers he hadn’t eaten. One day, a homeless man approached him and asked for his leftovers, to which Hoseuk Kim promptly gave him the food. As he walked away, he began questioning how many homeless and less fortunate people are in the city and what he could do to fix the issue of poverty. When he returned to Central after his internship, he created the idea of Brown Bags of Hope.

After graduating two years ago, Hoyoon Kim replaced his brother in charge and has been running the program smoothly.

“I’ve always liked to volunteer, so when the opportunity arose I went for it and had a great experience since,” Hoyoon Kim said.

The actual Brown Bags of Hope event occurs twice a year, once in the fall and once in the spring.

“What we do on the actual day of the Brown Bags of Hope event is very busy,” Hoyoon Kim said.

A group of 60 student volunteers meet up at the teacher’s cafeteria at 9 a.m. to create more than 250 lunches. Places such as Einstein’s Bagels, Budding Meat Factory, Great American Bagel, and our lunch food service Quest help supply the club.

After all of the lunches are made they take a train to the city, split into groups, and roam the streets handing out lunches and donated socks and gloves.

“What makes our event different from others is that our bags not only have food in it, but also a message of hope on them that allows the less fortunate we meet to know that students are thinking of them,” Hoyoon Kim said.

As simple as the concept seems, planning the event requires a lot of work.

“After a day of BBH I feel a lot of relief to be honest,” Hoyoon Kim said, “all the hours of early morning meetings and phone calls are over, I feel happy that I was able to provide people the opportunity to help out and do good in the process.”

Brown Bags of Hope isn’t just a one man job, though. Kim credits a lot of the events success to his 11 fellow executive board members.

“The board starts planning a month in advance. Sure we have our moments of disagreement, but we all have different ideas and improvements we all want to make as we strive to be the best we can be. They’re the best board I could have asked for,” he said.

He has led this event four times, the first two being done with his brother. The group has grown from originally 15 in 2012, to the current 65 volunteers.

“We have given out over 1,500 brown bag lunches and continue to grow.”

Hoyoon Kim will be graduating this year, leaving his brother and his legacy behind.

“We’ve set up an apprentice program that allows underclassman to see what the behind the scenes work entails while serving on the executive board,” Hoyoon Kim said, “I hope this event continues on for many years to come, because it’s an example of what a simple idea can become.”

Both brothers agreed that this experience isn’t just to help those in need, but to also help those participating to see how they can affect the community.

“BBH means opportunity to me,” Hoyoon Kim said, “I want everyone who reads this to know that if you have a positive idea, follow through and see where it takes you. It might require a lot of hard work and determination, but the end result will be worth it.”