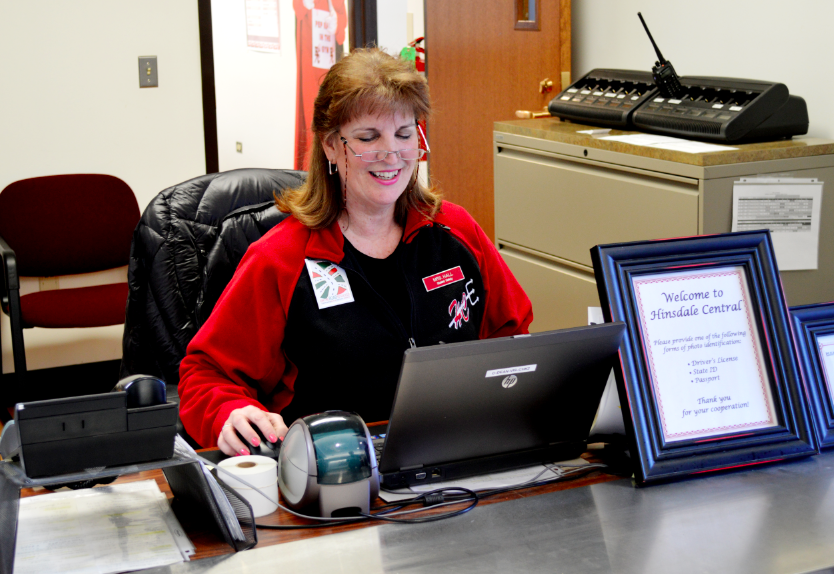 Mrs. Hall welcomes a visitor at the Greeter's Desk.

Even as hordes of tired students enter Hinsdale Central every day, kids can still expect to see one big smile. That smile belongs to Mrs. Jan Hall. Mrs. Hall is a very familiar face around the school. As a hall monitor, she is ubiquitous, ensuring the general well being of the student body.

“I have a lot of duties here at Central,” Mrs. Hall said. “My top priority is obviously student safety. I deliver passes for the dean’s office and supervise the cafeteria. There are also outside duties where I work as a crossing guard or even help with bus detail. After all of these duties, I then spend half my day working the Greeter’s Desk.”

People have often pointed out the enthusiasm with which Mrs. Hall carries out her daily tasks. What many people do not know is that Mrs. Hall has had a long history at Hinsdale Central.

“The best part of this job has always been the kids of course,” Mrs. Hall said.  “I love the idea of being at this school. This school, as you may know, was my Alma Mater, class of ’73. The weirdest thing is that some of my classmates and teachers are still here. How crazy is that?”

Mrs. Hall attended Central more than forty years ago. In the time since then, she has been all over the country.

“After I left Central, I spent some time in New York,” Mrs. Hall said. “Later, I moved to California. Eventually, I came back to live in Hinsdale. Funny how that works out.”

Despite attending Central so long ago, Mrs. Hall has noticed that a lot of the school has stayed the same.

“I noticed that the Driver’s Ed simulators downstairs in the basement are still the same,” Mrs. Hall said. “You could probably draw on them, and they still wouldn’t change, but don’t do that. The girls’ locker rooms got changed a little, but they’re mostly the same. Imagine seeing the same mirrors that I had used to put on mascara as a sixteen-year-old.”

Mrs. Hall also noted the athleticism in her time at Central.

“I was here when boys’ swimming and boys’ gymnastics used to win gold year after year,” Mrs. Hall said. “I knew John Kinsella, the Olympic swimmer, and the whole Kinsella family.”

It seems that while some facilities of Central may have changed, the same level of excellence and even the people have not changed over the years. There was one thing Mrs. Hall was sad to see go.