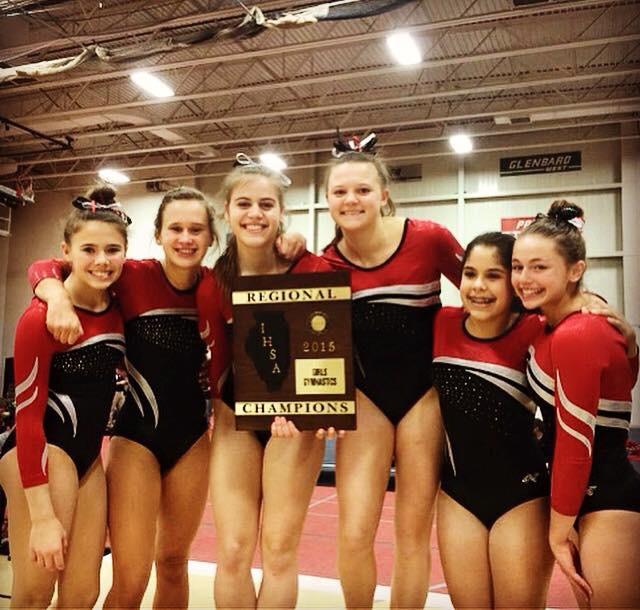 Senior Brigid Cultra smiles proudly after winning sectionals with her teammates on Feb. 20.

Brigid Cultra found her love for gymnastics at IGI when she was only six years old. The time spent there training, competing, and learning proved worthwhile, as she was the only gymnastic member from the Hinsdale Central Varsity Team to compete in state on Friday, Feb. 20.

This has been Cultra’s first winter without participating in club gymnastics, allowing her to participate on the school team, something she had been unable to do the last three years at Central.

“I knew I didn’t want to be on a college team so I wanted to have an easier senior year and be able to still have the feeling from competing for a school,” Cultra said.

The Girl’s varsity gymnastics team won the Regional tournament and advanced to Sectionals, where the team placed fourth. Cultra’s journey did not end there though. She qualified to compete as an individual in the state tournament for bars and floor on Friday, Feb. 20.

“It was different competing as an individual for state because I had to practice on my own. A lot of my teammates still came to support me at the meet, and I also knew girls from other schools that had made it as individuals so it was fun to compete with them too,” Cultra said.

Although she does not aspire to compete in college anymore, Cultra will now begin training and competing with her club team at “Action Gymnastics”, which she joined last summer.

“I definitely wouldn’t be where I am today without the coaches and time I spent at IGI and now I am looking forward to learning new skills and improving at Action.”