Dance release: one student taps into her heritage 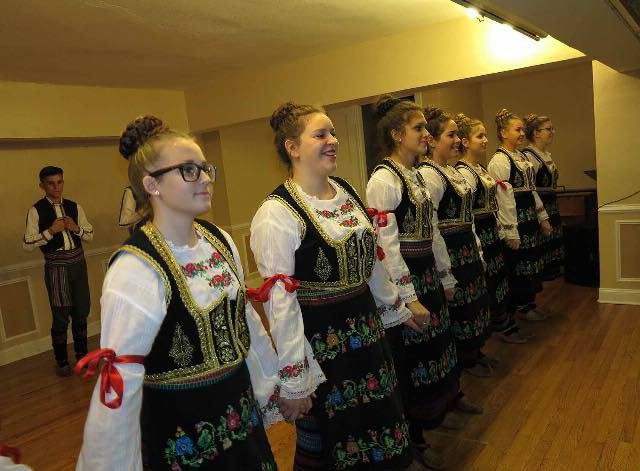 High jumps, synchronized steps, complex shapes and patterns, the beating of the feet of Cirovic and 15 of her closest friends are almost identical. Hands locked together, their passionate faces gleam towards a supportive crowd, looking up at the traditional dances of Serbian Folk. Their upper bodies remain boxed, completely lined up, as their feet entangle around each other in a web of patterns. Cirovic looks up, smiles to her group, and puts forth a prideful face.

Teodora Cirovic, sophomore, is just one of the multicultural students of Hinsdale Central. Cirovic reunited with her heritage and started dancing in the Traditional Serbian Folklore Dance Group ‘Moravac’ just last year, and it has been all the worthwhile. Now, she embraces living her culture miles away from her homeland.

Cirovic made the move to America six years ago, leaving her hometown in Belgrade, Serbia at the age of ten.

“My family decided to moved to America to give me and my sister a better education” Cirovic said.

Cirovic joined the community at an older age, not being familiar with American culture.

“It was hard connecting to people since I didn’t speak their language at the time” Cirovic said.

Even so, Cirovic persevered through the challenges of a sudden move, and has developed a sort of mixed identity. Her heritage remains embedded within her, constantly coming home to foreign music, T.V. networks, and the occasional community coffee time. But as she enters school, she begins to connect more with her American side.

Cirovic felt that she wasn’t getting enough of what she used to have. The late night practices, learning dance moves on a crowded stage, trying on long skirts and socks for tomorrow night’s performances. That suddenly seemed missing from her new life in America.

“I danced in the biggest dance group in Belgrade for four years” Cirovic said, claiming it to be very influential growing up.

Cirovic tried her hardest to stay connected to her Serbian culture by speaking the language at home, going to Serbian camps, and regularly attending Serbian events, but it wasn’t enough.

She joined a folklore group nearby after getting to know some of the kids in it. After finally joining it, her cultural emptiness was fulfilled.

“[Joining folklore] was more of a positive impact,” said Milica Cirovic, Cirovic’s younger sister and also a member of the “Moravac” folklore dance group. “She became friends with a lot of people and has developed a larger social life”.

Teodora comes to life in the presence of her group, as she develops a greater sense of identity when surrounded by other second generation kids from the same background as her.

“My sister is definitely more connected to our Serbian culture,” Milica said. “She spends more time in the Serbian atmosphere, speaking the language at home, becoming more driven and excited by Serbian events.”

Sweat drips off her brow after a night of intense and rigorous dance practice. Conditioning is necessary, clearly heard by the short breathing of the whole group. Relentless and repetitive practices cause the dancers to roll their eyes at their instructor. Their preparedness is noticeable nights later, when they step out on that stage in their elf-shaped shoes and tied up hair, smiles on their faces, and perfectly synchronized steps.

“I don’t know what I would do without folklore and the friends I’ve made in it” Cirovic said.

And the beating of the music continues as the attentiveness and awe of the crowd is taken away by the dancing.