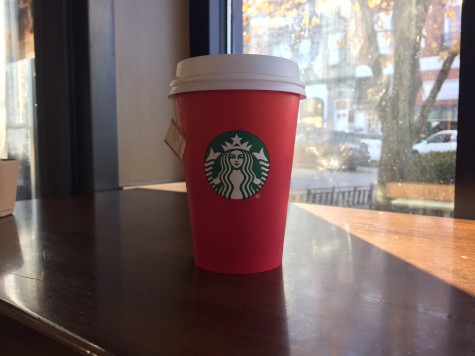 It’s that time of year again: Christmas songs on 93.9 in November, holiday sales at the mall, and last but not least, Starbucks holiday cups. However, this year Starbucks threw the world for a loop when it announced it would forgo their usual holiday cup design in favor of plain red cups. While most people don’t even pay attention to what type of cup their non-fat no-whip caramel frappuccino comes in, and another chunk of society doesn’t even care, there were a select few who were crushed at the lack of snowflake and Christmas tree designs when Starbucks rolled out the new holiday themed cups at the beginning of the month.

At first, a select few from the Christian population started using social media to express their disapproval at the plain red cups and try to protest them. Joshua Feuerstein, evangelist and self-described social media personality, posted on his Facebook page on Nov. 5, saying that “Starbucks REMOVED CHRISTMAS from their cups because they hate Jesus.” He’s also the same man who started the #MerryChristmasStarbucks movement. In Feuerstein’s video, he explains that he “pranked” the coffee chain by telling the barista his name was Merry Christmas, and therefore they had to write the same words on the side of his cup.

“Corporations aren’t obligated to be affiliated with a religion,” said Isha Kukadia, junior.

Along those lines, some students expressed that private companies can choose what they want to display.

“I was surprised Starbucks were allowed to have just Christmas themed cups in the first place,” said Charlie Zajeski, senior.

While some companies like Chick-fil-A or Hobby Lobby promote their connection to their religious roots, Starbucks has never openly been affiliated with a certain religion. In fact, only 71 percent of Americans identify as Christian, and not all of them have a problem with Starbucks’ new holiday cups.

“Starbucks cups shouldn’t be a symbol of Christmas. It doesn’t bother me, and I’m Christian,” said Emma Lindsey, junior.

Carly Owens, senior, doesn’t understand all the fuss. “The Starbucks thing is stupid,” she said.“There are other things to worry about.” The outrage from Feuerstein and others only sparked even more indignation from people who would agree with Owens. They were confused and vexed as to how the ridiculous situation had gotten so big in the first place.

But why did Starbucks decide to make this change anyway? In an effort to refute the hostility Starbucks was receiving, the company posted a statement on their website. Part of the reason the change was made was because Starbucks, “wanted to usher in the holidays with a purity of design that welcomes all of our stories,” according to vice president Jeffrey Fields. The website continues, “This year’s design is another way Starbucks is inviting customers to create their own stories with a red cup that mimics a blank canvas.”

Whether or not certain people choose to boycott Starbucks, the company is here to stay, and it looks like the message they are choosing to send out with their new cups benefits not only one religion, but all of them.