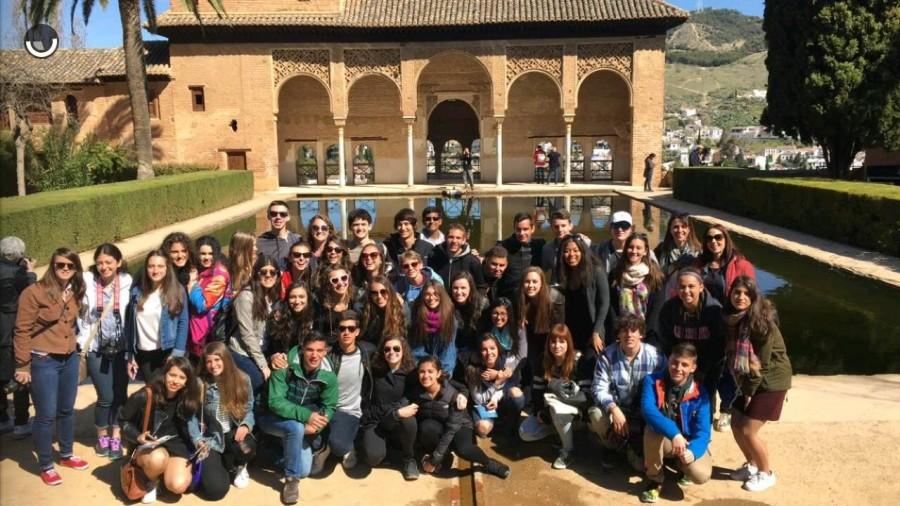 Over Spring break, a group of Central Spanish students traveled to Spain with Ms. Brodell to see first hand the culture that they have been studying for the last three to four years. They became familiar with another culture by studying and traveling and even living with a Spanish family.

When students arrived, they explored Sevilla, the capital of Andalucia in the south of Spain, for Semana Santa, or Holy Week.

“All of the streets were blocked off for the parade,” said Mariam Banoub, junior. “It was amazing.”

After Sevilla, students were assigned to stay with host families with children who attend Padre Poveda High School in Gaudix, about half an hour outside of Granada. Banoub says that when she was with her host family, they ate five times a day.

“You always ate with the whole family,” Banoub said. She was placed with a host brother her age, and a sister a year younger than her. “We played Wii and watched movies and just talked.”

According to ACIS, the travel program Central worked with, 73 percent of their travelers note that they speak one foreign language very well, compared to the national average of 18 percent.

Talia Sankari, senior, was placed with the Gruner family. Julia Gruner, her host sister, calls the experience a “unique chance” because exchanges with places so far away aren’t a common thing there. Sankari’s host sister has taken English for 11 years in school, but was still able to learn from the American students. “Not only did we practice our language skills, but also learned about the cultural differences between our nations,” Gruner said.

The students spent one day in school with their host siblings, but while in the area, they visited the famous Alhambra in Granada, took a trip to see the Alpujarras and a guided tour of the Sorbas Caves. The best part was the view. “It’s like you were on top of the world,” Banoub said.

Lots of planning went into the trip, including months of proposals to the school board, as well as late start meetings with the teachers and teens who were going on the trip. These meetings were vital in making sure the teens knew each other as well as the expectations throughout the trip.

“Another part of the planning is the Spaniard’s trip to Chicago,” said Señorita Brodell. “They’re going to go to the Shedd Aquarium, and a Cubs game.”  The itinerary includes other typical Chicago activities.

On May 1, the host students from Spain will be coming to Central to experience suburban American culture for a week. It will be a sentimental day for all.

“By the time they left, we had become super tight with one another. Saying goodbye was hard for all of us,” Gruner said. This will be Gruner’s first time not only in the United States, but on another continent. “Traveling so far away will be an adventure.”