Central reacts to the 2016 Presidential Election 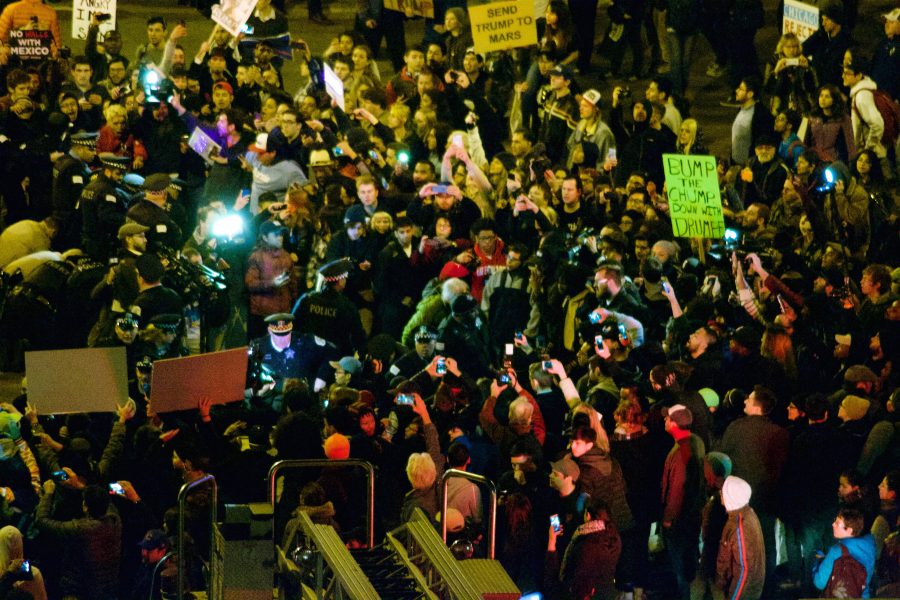 In the days following the election on Nov. 8, people gathered in cities around the country to protest Donald Trump's victory in ways similar to how they protested during his campaign, like at his rally in Chicago on March 11.

After it was officially announced by many major news outlets that Donald Trump was the projected winner of the 2016 Presidential Election in the early morning hours of Wednesday, Nov. 9, Americans were hit by an entire spectrum of emotions, including hope, anger, and indifference just to name a few.

Most Hinsdale residents live in DuPage County, which is traditionally Republican. However, in the past three elections, the majority of the county’s voters chose to vote for the Democratic Party’s nominee. In this election, that nominee happened to be Hillary Clinton. Although most students can’t vote, many also showed allegiance to Clinton.

“I wanted Clinton to win. I agree with most of her stances, and I think she is much more qualified to be president because she’s had much more political experience than Trump. She’s closer to the image of a president that people have in their head. She acts more ‘presidential,’” said Emily Hines, sophomore. “I was very upset with the election results. I was angry at people who chose not to vote and people who voted for third-party candidates.”

Though there are a fair amount of Clinton supporters at the school, Donald Trump won the school-wide mock presidential election on Thursday, Nov. 9, so many students were content when he won the actual election that played out on a national stage.

“I am a Republican, and I will support whoever the candidate is,” said Ryan Pokorny, junior. “I was happy [with the results], less because Trump won but mostly because Clinton didn’t win.”

Pokorny is among the many Americans who saw Trump as the better option when compared to Clinton, which was largely due to her past actions and insider status with the federal government.

“I think people really disliked Hillary. She was the wrong candidate for this election,” said Mr. David Ritter, AP U.S. History teacher, who also teaches AP Government and Politics at Hinsdale South. “You couldn’t be much more establishment than Hillary Clinton, and this was very much an anti-establishment year. A lot of the white people in this country felt like their issues weren’t being considered.”

Though this dislike was evident throughout the election cycle, many still saw a victory in Clinton’s future because she polled higher than Trump in the majority of national polls. However, it was clear that the polls were a poor indicator of the election’s results.

“I have several theories on [why so many people initially predicted that Clinton would win], but I think that a lot of people didn’t tell the pollsters how they really felt, especially in Michigan, where there was a very high number of undecided voters in all the polls,” Mr. Ritter said. “[I started to think Trump would win] when Clinton’s Midwest firewall started to break, when it looked like she might lose Michigan and Wisconsin.”

Once Trump was projected as the winner, social media timelines started blowing up with upset Americans, claiming they planned to move to Canada and using #NotMyPresident on their posts. Much of this was because Clinton won the popular vote.

“If [Americans] want to leave they should have the right to. If anyone wants to leave the country, they aren’t a true American,” Pokorny said. “Even if Clinton won, I wouldn’t think about leaving. The only way to grow and prosper is to rally around each other and come together as one.”

The Canadian immigration website crashed as election results began to appear, and the amount of Americans searching for Canadian jobs through the Internet increased as well. However, many people believe Americans will likely not follow through.

“I think the percentage of people who say [they’ll move] and actually do it is infinitesimally small,” said Mr. Christopher Wilbur, American Politics and AP Government and Politics teacher. “If you’re unhappy with the election, instead of fleeing, do what you can to try to make the country better in whatever way you feel that is. Work within our country rather than just trying to escape. I think that’s a much more mature way of handling the results of the election if you don’t like it.”

Social media and the Internet were heavily used throughout the election cycle as well, not just the days that followed the results. While they definitely weren’t deciding factors of the election, many saw them as valuable tools for candidates to attack each other and defend themselves.

“The modern election is about the media and who can control the message,” Mr. Wilbur said. “One of the things Donald Trump was really good at was keeping the attention on him, and even if he had a misstep, doing something else to change the narrative and update the narrative so that people weren’t focused on whatever the last thing was.”

Since Trump’s victory, social media has been dominated by protesters in cities across America, such as Chicago, Los Angeles, and New York City. Many protesters are afraid that their rights won’t be protected and that their voices won’t be heard.

In an interview on CBS News show “60 Minutes,” Donald Trump responded to these protests by attempting to assure people that there’s no need to be afraid. Many of his supporters have started spreading that message as well.

“I think [Trump’s presidency] will be better than everyone else is saying it will be,” Pokorny said. “I think he is going to help our national debt, fight and defeat ISIS, keep [illegal immigrants] out, save our jobs, help the middle class, help cops and [veterans], everything that needs to be fixed.”

On Nov. 8, Americans also voted for their congressional representatives. The Republican Party maintained control of both chambers of Congress, with majority in the Senate and the House of Representatives. Trump will also have the opportunity to nominate a Supreme Court justice during his term, so the Republican Party could effectively control all branches of government if things go as they hope.

“[Trump’s presidency is] going to be very interesting to see. I think a lot of it is going to hinge on whether he decides to continue the practice from the [George W.] Bush and [Barack] Obama administrations of relying on executive orders and executive power to get things done when Congress wasn’t playing ball, so to speak,” Mr. Wilbur said. “I think the second thing is how he’s able to deal with Congress, like he and Paul Ryan, for example, have not seen eye to eye on a lot of issues. Right now, everyone seems to be pretty unified on the Republican side, but it’s going to take a lot of work for Donald Trump to hold that Republican coalition together.”