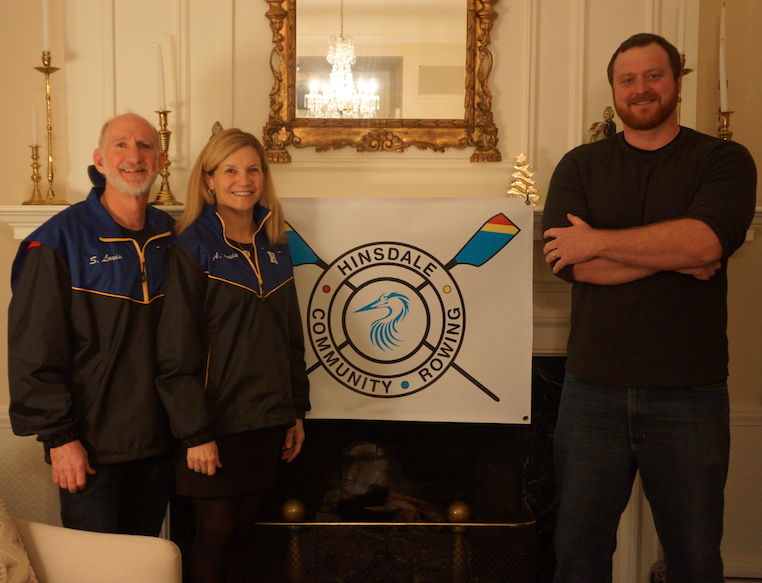 The Jablonski family hosts an informational meeting about rowing for students from Hinsdale Central, Hinsdale South, Carl Sandburg and other surrounding areas interested in rowing next year.

Although rowing has existed since ancient times, it wasn’t until the 1700s that it was first introduced to the United States. The sport gained popularity quickly and became the first collegiate sport at the first universities. These are schools like Harvard, Brown, Princeton, and the other Ivy League schools. The sport also became popular with east coast prep schools, which sent the majority of their students to these universities. With that said, though, the sport isn’t totally isolated to the east coast.

Here in Illinois there’s the Chicago Rowing Foundation which supports a team that travels around the whole country. They race 1.5k and 5k races with four man and eight man boats. Hinsdale will soon have this opportunity to row as the Hinsdale Community Rowing Club is taking shape.

The idea for a rowing club in Hinsdale was first thought of by Steve Louis, a father to children that rowed at east coast prep schools. He and his wife, Amy have rowed for years on the Des Plaines River and they thought it would be conducive for a high school team.

“I wanted to have Mike, the coach of Chicago Rowing Foundation’s team, come and check this River out,” Louis said. “It has perfect water and it’s in a perfect area.”

Mike Wallin, the coach, was open to the idea. He checked the river out and after discussion they decided they would merge a Hinsdale team with the team in the city. They’d call the Hinsdale branch the “Hinsdale Community Rowing Club”. The team would be for high schoolers in Hinsdale and other surrounding suburbs and would provide an opportunity which many in the area have not come across.

Both Louis and his wife see this opportunity as something that should interest many students.

“There’s nothing more fun than being out on the water with nothing besides you, your teammates, and wildlife,” Amy Louis said.

There are many opportunities that come with rowing, one of them being college scholarships.

“I was blown away by the collegiate opportunity that the sport yields,” said Wallin, when explaining why he initially started rowing.

He went on to explain how even decent rowers could get college scholarships just because of the fact that there are relatively few rowers around the United States. And for those that are particularly talented, there are opportunities to be recruited by the most prestigious colleges in the United States.

The plans for the team are still in the making, but there will be a “Learn to Row” camp in the summer. Dates are tentative, but it will most likely be from July 31 to Aug. 4. Sign ups begin here after Feb. 15.

Come September, the team will begin with practices and competition. Some races will be local such as the duel against New Trier, but most will be out of state. They’ll be in places such as Nashville and Cincinnati in an effort to row against national caliber competition because that’s the long term goal: to make it to nationals.