High school hazing: does it exist? 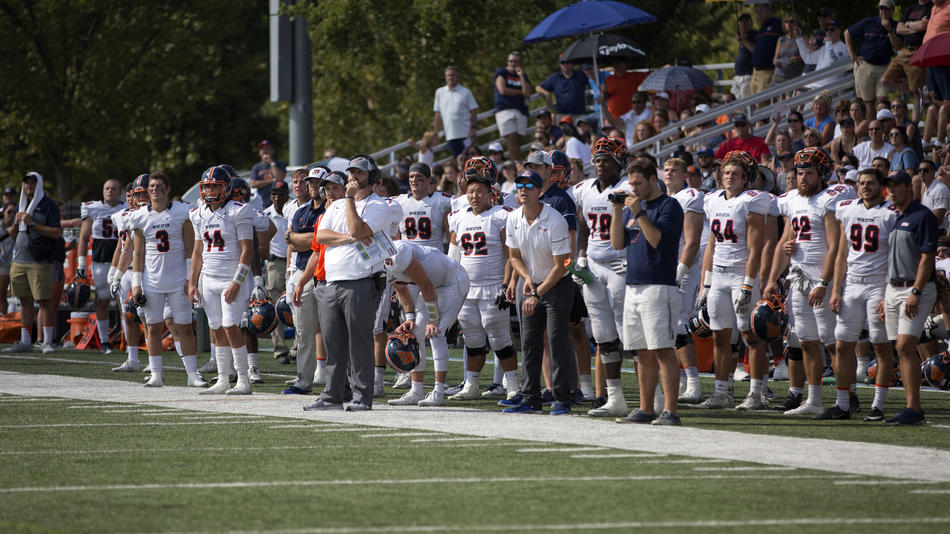 Courtesy of The Chicago Tribune

Wheaton College's football team is currently ranked fourth in the country in Division III. It recently made news when five members were investigated for a hazing incident in 2016.

Ecstatic after joining the football team as a freshman, a 19-year-old Wheaton College student had just started school. He was getting to know his teammates and learning his way around his new school. One day, he was watching NCAA basketball in his dorm room when five of his football teammates barged in. He was tackled to the ground, punched and kicked, and had his ankles and wrists tied together with duct tape. A pillowcase was put over his head as he was carried out of the building. In a long car ride, the five football players attempted to sexually assault him. He was beaten while he pleaded for the five guys to stop. Later that night, the student was left stranded on the school baseball field, half-naked with two labrum tears, causing injury to his shoulder.

According to the Chicago Tribune, the Wheaton College freshman, who remains unidentified, was severely hazed after joining the school’s football team. Although the incident took place in March 2016, it is currently making headlines because the five football players are just now being charged for their actions.

Hazing occurs when students, usually underclassmen, are put through humiliating and often painful situations as a part of their “initiation” to various sports or activities. It is most common with fraternities or sororities at college, but it is also fairly common amongst sports.

Recent incidents of hazing have been on the rise as the school year has begun across the country. With the recent news of the Wheaton College incident, many are questioning if hazing takes place in high school settings.

“It could easily happen in high school, as someone may think that what they are doing is no big deal or just a joke, but now with hazing becoming an apparent issue, some of the smallest and least important things can be considered hazing,” said Gavin Schwarz, junior and member of the boys varsity soccer team.

While no major hazing incidents have occurred at Central specifically, there have been many high schools that have had issues with hazing.

Niles North High School, 40 minutes north of Hinsdale, has recently been investigated after receiving reports of hazing amongst the varsity football team. According to ABC7 News, all games and practices were suspended for one week.

When an underclassman makes the Central varsity lacrosse team, there is a tradition that could potentially be considered minor “hazing.”

“The morning after I made the team, the whole girls lacrosse team ran into my bedroom screaming and cheering at six in the morning. They made me get ready quickly and packed my backpack full of a ton of random things lying around my room,” said Sara Draddy, junior, who made the team as a freshman. “Then, the whole team had breakfast together, and they made [the new members of the team] wear clover signs around our necks that said ‘Kiss Me I’m A Newbie!’ and hats with clovers all over them as well.”

This tradition is all in good jest, but it still targets the underclassmen as initiation to the sport nonetheless. Along with lacrosse, girls gymnastics also has seen minor forms of hazing.

The minimal hazing that has occurred here can be attributed to the meetings before each sports season. Mr. Daniel Jones, the athletic director, talks about hazing and how to prevent it at these sports meetings.

“I have meetings with our coaches and I also meet with our athletes before each season at a mandatory meeting, and one of the things we talk about is hazing and treating each other with respect and being a good teammate,” Mr. Jones said.

Along with this, Mr. Jones hands out a sheet of paper to each coach titled “Six Steps For Preventing Hazing On Your Team.” Some of the steps include providing positive alternatives to hazing, such as team dinners and movie nights, and also installing a buddy system where newcomers are paired with veteran athletes.

The meetings and steps for preventing hazing have proved successful amongst many sports at Central.

“I haven’t heard of any hazing incidents here. We talk about it every year, we talk to the kids about it,” said Mr. Brian Griffin, varsity football coach. “If you should be treating anyone any way, it should be like they’re your family and like you’re taking care of them rather than trying to put them down.”