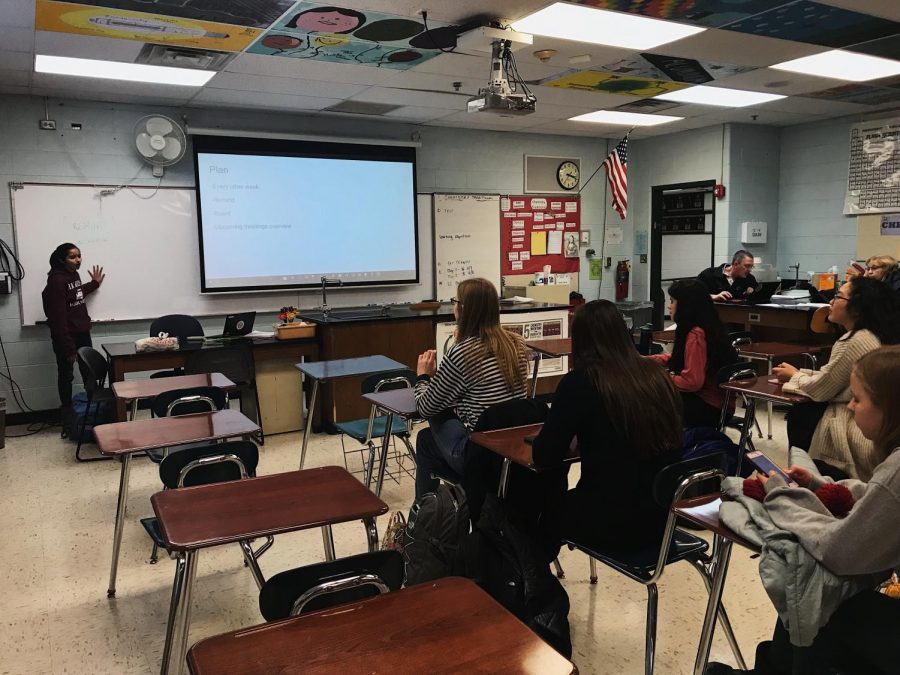 Shalni Sundram, junior, is the leader of Women in Engineering Club. She led the club Thursday morning and went over what the club was about and what members would be doing.

In an increasingly technological and modern world, many careers in the fields of Science, Technology, Engineering, and Mathematics (STEM) are becoming more popular. However, even as these fields are becoming a necessity for the world and the workplace is becoming less gender-biased, many STEM careers are still dominated by men, according to a study done by the Economics and Statistics Administration. In spite of this, though, one new club at school has been created to change the male dominance of these fields: Women in Engineering.

Women in Engineering Club was officially started by Shalni Sundram, junior, just last month, and it meets every other Thursday. The sole purpose of the club is to inspire and educate girls about the different areas and jobs that they can pursue through the study of engineering.

“This purpose of this club is to encourage women to go into STEM fields, and to educate more young women about the different type of careers that they have in engineering. I feel that women are underrepresented in the field of engineering, and so I think this club can have a very powerful impact on the school,” said Mrs. Julie Baker, club sponsor.

As the club name indicates, one of the main differences between Women in Engineering and other clubs at school is its empowerment of women. Although there are other STEM-based clubs that students are a part of, they often don’t focus on the social barriers that students may encounter when pursuing the field in the future.

According to MIT news, about 20 percent of students who study engineering are women, and only about 13 percent of practicing engineers are women.

“It’s always been a male-dominated field, and there’s no reason why a male should be an engineer and a female shouldn’t, so right now it’s just a matter of building up that confidence in women and eliminating any intimidating atmosphere that could’ve been set by men,” Sundram said.

At their past meetings, Sundram has attempted to achieve this goal of inspiring women to explore engineering by presenting information to the members regarding the different types of engineering one can study and different summer engineering programs students can apply to.

“When I first came to high school, I had known that I was interested in math and science, but I wasn’t sure what I could do with them in my future,” Sundram said. “So, one of the main purposes of this club is to educate and inspire those who want to pursue engineering but don’t really know where to start looking or what a career in engineering really means.”

Even though the club is fairly new and has only had two meetings so far, there are approximately 20 members already, all ranging in ages and levels of engineering experience and knowledge.

“I plan on staying in the club because unlike other clubs, it’s very focused on helping its member distinguish what type of future they want in engineering,” said Olivia Guido, freshman member. “I would definitely recommend any student to attend because its small, community-feel is very empowering and let’s you focus on your own individual engineering desires.”

Members of Women in Engineering can expect an eventful future, as Sundram and Mrs. Baker already have some hopes and plans in the works, ranging from becoming a sub-commissary of the Society of Women in Engineering to further expanding members’ network of support, to inviting an engineer from Argonne National Laboratory to speak to club members.