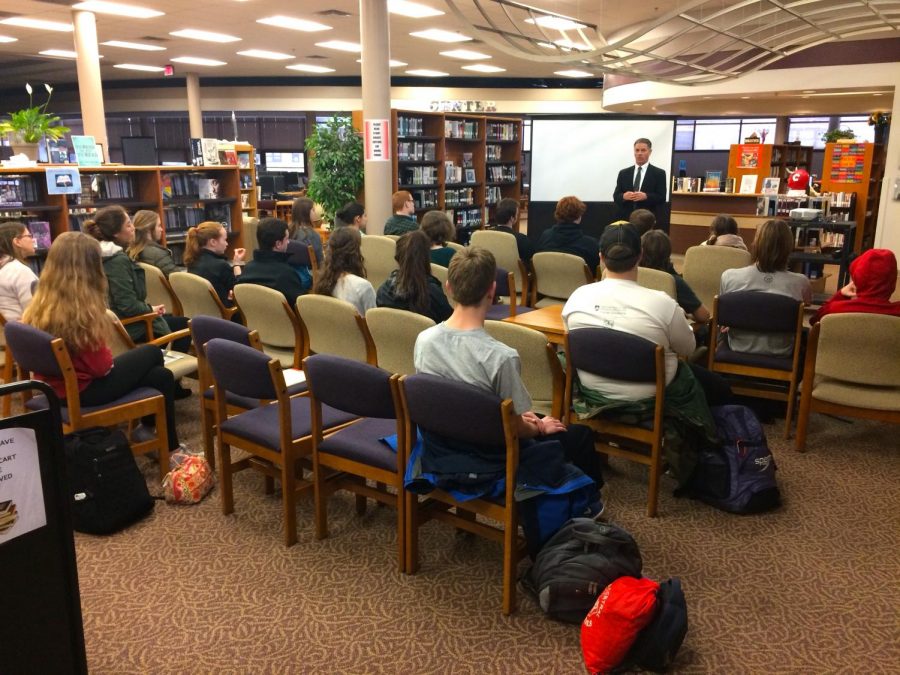 Criminal justice club, which usually meets on Thursdays, invited a member of the Federal Bureau of Investigation (FBI) to come speak to members about his career requirements and duties.

Whether you wish to learn about how examiners detect bank fraud, the life of an FBI agent, or the science behind crime scene investigation, criminal justice club offers it all. The club serves as an outlet for students with interest in a career in criminal justice or for students who just want to learn more about the field. Sometimes during meetings, there are speakers that come in to talk to students about their careers in the criminal justice field to allow them to become familiar with their duties.

“There is a lot of diversity within the field,” said Officer Holecek, school resource officer and club sponsor. “So, having a series of speakers come in to talk to these students introduces them to this diversity and helps them understand what path they need to take if they want to get into a career similar to the speaker’s. We have had two FBI agents – some undercover drug agents, a bank fraud examiner, and a ICE customs agent – come in and speak to our members. I would love to have more come, as it is very popular with the members.”

The club also helps to promote a positive relationship with the students and criminal justice agencies that are around the area. By connecting with these agencies and showing their interest, the club is able to honor the work of those who serve the local communities.

Additionally, the club goes on field trips, usually one every year, to learn more about this career field. About 13 or fewer members usually attend the field trip, often because it is held on a non-school day. For example, this year’s field trip was held on the Friday, March 2, an Institute Day.

This year the club planned a trip to the U.S. Marshals Great Lakes Fugitive Task Force Office in Chicago. This space was created with the purpose of trying to catch fugitives who are trying to flee a crime and pass state borders. On this field trip, the members took a tour of the space and were able to use the stimulator equipment that officers use to train themselves for real situations. The students had the chance to get into the stimulator two at a time and experience a 360-degree simulation of an actual shooting. Doing this allowed the club members to understand the kind of pressure that officers are often in and when it is appropriate to shoot a suspect.

Aside from this location, the club has also been to many other places in the past. Last year the club went on a trip to the DuPage County Sheriff’s Crime Laboratory which showed students the scientific fields associated with criminal justice, including drug and fingerprint testing. Some club members also volunteered for the 9/11 memorial in Oak Brook, called the Honor Fields, in the past year.

Although this field is of interest to many people, especially in the younger generation, there aren’t as many people in the club. Much of the executive board and the club sponsor believe that it is because the club is not known widely enough at the school to attract enough attention. To recruit members, the students attend freshman orientation with the rest of the school clubs to show freshman what the club is about, and they are also planning on making a video to showcase on the school webpage so that more people can be introduced to it.

Many join the club because they have an interest in seeking a career within the field, so the club can, in a sense, be compared to ones like the Future Health Professionals of America which also bases many of their club activities around speakers that come talk about their careers. However, in this club, not all the students have an interest in pursuing a career in the field. According to Officer Holecek, many students may be wary of a career in this field because it may be dangerous or low-paying.

“I joined the club because I was considering becoming a lawyer,” said Mikayla Kamon, junior member of the club. “While I believe I may pursue a career in medicine, I have discovered a serious interest in forensic science. I did so after speaking with a forensics professional, the day she came in to speak with [the club].”

With around 40 students, the club usually meets on Thursdays, although the meetings are not habitual and often are planned based on students’ schedules. For more information, students may stop by Officer Holecek’s office on the main floor.