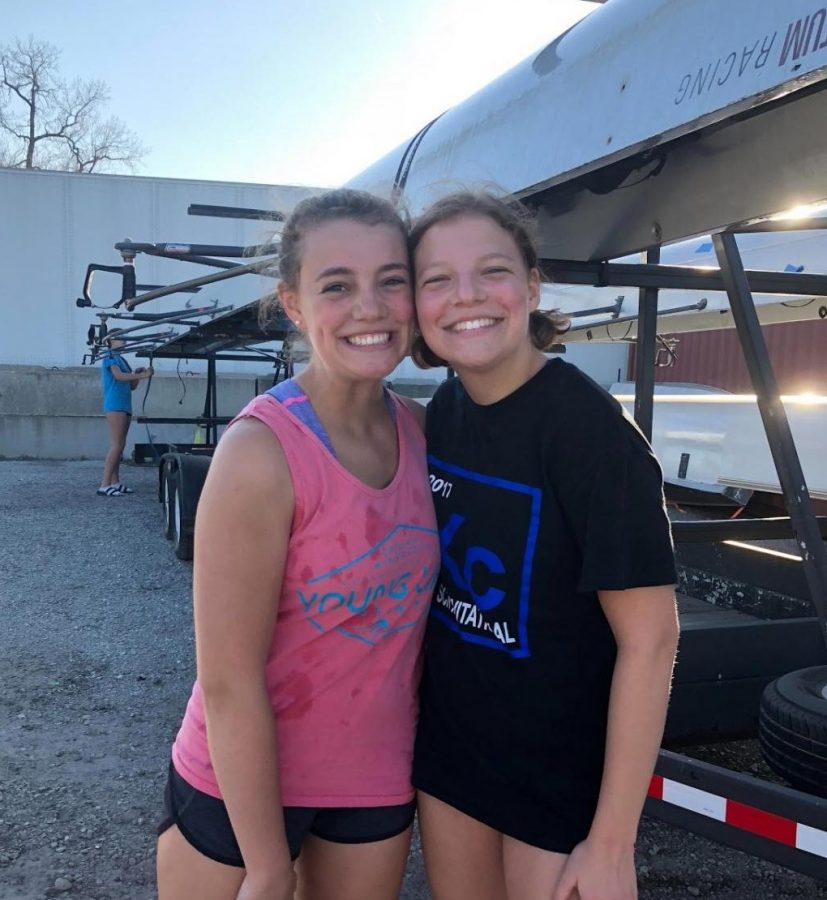 Sisters Genny and Olivia OByron row together for a local club.

The southern end of Madison Street presents an entirely different world than its busy intersection near school. As opposed to students walking in the crosswalk, different trucks and school buses park in a gravel lot at the end of the hill-filled winding road. As a few cars wait for the rowing practice to conclude, a light breeze pulls the flow of the river to the right. Looking out into the distance, a dozen people paddle an eight foot silver boat to shore, and as the boat stops, rowers exit in tennis shoes, shorts, and different t-shirts, and proceed to climb up the wooden steps back to the gravel parking lot. Ten people lift one of the three boats over their heads and walk up the steps in sync. Teammates gather around a wooden picnic table in the parking lot and wipe away sweat. Genny O’Bryon, sophomore, joins me as she grabs a sip of water after a grueling practice. Her sister Olivia O’Bryon shows me her blistered hands. She explains the raised red bumps are just a part of holding the oars on the water. The coaches periodically shout instructions to carry supplies into the trailers. Once everyone finishes, one of the two coaches pulls a gate in front of the river. The girls and boys team slowly gather in a half circle near the water to listen to the coaches’ feedback. Everyone laughs and jokes around as they go into a team huddle to conclude practice.

After having done track for four years, Genny decided to do rowing at Hinsdale Community Rowing in Burr Ridge instead for the spring 2018 season.

Rowing requires similar leg power to running, but offers a different sport experience, according to Olivia. Eight rowers race together against other boats in competitions called regattas. As opposed to starting in January for track, the rowing spring season begins in February and continues until May. According to Genny, rowing is a much more chill than school sports. The girls’ rowing team consists of students from Hinsdale Central, Downers Grove North, Lyons Township, and Fenwick High School.

Genny loves the team atmosphere for rowing and she said she “feels comfortable talking to everyone on the team.”

However, she must “stay up later to finish homework” in the rowing season. Genny takes the bus home from school every day and gets five minutes at home to get ready.  She carpools with several team members to and from practice. Rowing practice takes place from 4 to 6 p.m. daily. A typical practice consists of warm-ups, equipment setup, and practice on the water. If there is rain, practice will often be moved indoors to a gym where they run and do strength exercises. She completes her homework after she gets back from dropping people off at 6:30 p.m.

Genny does rowing with her sister Olivia, who also quit track to pursue rowing. The two have used rowing as a opportunity to bond. They often sit near each other on the boat to chat.

“Having my sister on the team is super awesome because she’s my best friend,” Olivia said.

According to Laura Mikirs, the girl’s team coach, there is no skill requirement to make the girls or boys Hinsdale Community Rowing team, only “the willingness to work hard.” Any experience in an endurance sport such as swimming or cross country can help prepare for rowing.

Genny participated in her first regatta in early April. Her boat competed head to head against another team in southern Illinois. Although they did not win the competition, Genny enjoyed the experience and said she hopes to participate in rowing on a competing team in college because she loves the team atmosphere. As for now she will continue rowing during the end of the season and in the summer rowing camp.