Class of 2018 shares their senior quotes 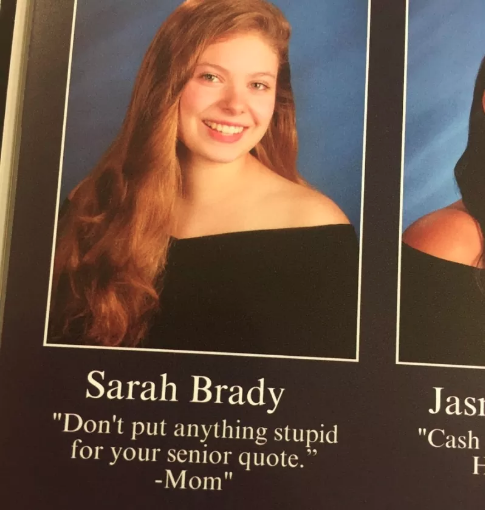 With graduation quickly approaching, we gave seniors the opportunity to encapsulate their high school experiences within a senior quote. Whether they chose something funny, inspirational, or anything else in between, we wish them luck as they start the next chapter of their lives!

Chase Ackerson: “Shoot for the stars and land on the moon; don’t shoot for the moon and fail to take off.” – Someone

Sophia Ali: “Why are you running?” – Vine

Hannah Anderson: “Sometimes you gotta work a little, so you can ball a lot.” – Tom Haverford, Parks and Recreation

Tomas Baliutavicius: “No way this is on the test.” – Self

Julia Baroni: “Without obsession, life is nothing.” – John Waters

Andrew Benington: “There is no ‘I’ in collaboraton.” – Ken M.

William Bradley: “The nine most terrifying words in the English language are: ‘I’m from the government and I’m here to help.'” – Ronald Reagan

Camey Calzolano: “You have to think anyway, so why not think big?” – Donald Trump

Lauren Cecchini: “I would agree with you, but then we’d both be wrong.” – Russell Lynes

Katie Cernugel: “We have to remember what’s important in life: friends, waffles, and work. Or waffles, friends, work. But work has to come third.” – Leslie Knope, Parks and Recreation

Julia Chatterjee: “Every time a S’well bottle hits the floor, a bird dies.” – Self

Joy Chen: “Don’t I live in history, and doesn’t history live in me?” – Eula Biss

Alex Choi: “They say it don’t be dat way when it really do.” – Anonymous, probably Jesus

Daniel Chval: “You catch a lot of flies with honey, but you catch more honies bein’ fly.” – Unknown

Stephanie Dal Porto: “Good, better, best. Never let it rest ’til your good is better and your better is best.” – Saint Jerome

Adam DeDobbelaere: “Truth is my goal, and controversy is my gym. I’ll do 100 reps of controversy for a six-pack of truth.” – Kanye West

Shreya Dhananjaya: “This was nothing like High School Musical…” – Self

Michael Gachich: “Well, I’m going to college and have no idea what to do with my life, but at least I have John Wick.” – Self

Joel Guerra: “Never forget that Cleveland blew a 3-1 lead.” – Self

Will Goebel: “Hey guys, you ready to let the dogs out?” – Alan Garner

Cameron Hamburg: “Walter, I love you, but sooner or later, you’re going to have to face the fact that you’re a moron.” – The Dude, The Big Lebowski

Alexandria Haynes: “I’m the mother hen of all my chickens.” – Self

Esther E. Hirsch: “You’ll never get a quote out of me!” – Anonymous

Sophia Horowicz: “If someone ever asks you to do something for them, do it really bad so you never have to do it again.” – Paris Hilton

Samone Khalil: “Stop wasting your time looking for the key of happiness; the door is open and unlocked, just walk through it.” – Self

Megan Melia: “Have courage, and be kind.” – Cinderella

Claire Mueller: “I wish there was a way to know you’re in the good old days before you’ve actually left them.” – Andy Bernard, The Office

Valentyn Mykulyn: “Dealing with backstabbers, there was one thing I learned. They’re only powerful when you got your back turned.” – Marshall Mathers III (Eminem)

Ndidi Ojiako: “One thing you learn when you’ve lived as long as I have – people aren’t all good, and people aren’t all bad. We move in and out of darkness and light all of our lives. Right now, I’m pleased to be in the light.” – Neal Shusterman

Evan Ostrowski: “It’s a character-builder to be a fan of the Chicago Cubs.” – Eddie Vedder

Paulina Piekos: “The expected is just the beginning. The unexpected is what changes our lives.” – Meredith Grey

Charlotte Priester: “Ladies do not start fights, but they can finish them.” – Marie, The Aristocats

Maxwell Rahal: “What is today but yesterday’s tomorrow?” – Mr. Krabs

Israel Rosales: “Of course I dress well. I didn’t spend all that time in the closet for nothing.” – Unknown

Ana Snyder: “‘Do you speak Mexican?’ – First girl I met at Hinsdale Central. I’m Ecuadorian.” – Self

Nicholas M. Speziale: “This is not one of my finer moments.” – Self

Charlotte Sudduth: “If you ever speak to me in Spanish, please use the formal ‘usted.'” – April Ludgate, Parks and Recreation

Nausherwan Tirmizi: “My name has been mispronounced so much that even I have forgotten how to say it.” – Narshuan Tiramisu

Yi Yuan: “If you never try, you will never know.” – John Barrow