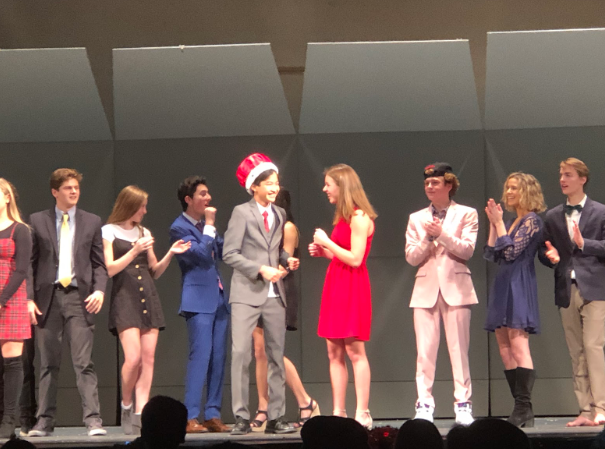 The winner of the 2018 Mr. Hinsdale Pageant was Patrick Hsiao, junior, after an audience vote and help from the judges, Mrs. Saller, 2017 Mr. Hinsdale Josh Lange, Mr. Simpson, and Mrs. Hurt.

All proceeds of the contest went to the Just1Mike foundation, which was started after the passing of Michael Brindley, a Hinsdale Central student who died of cardiac arrest at the age of 16.

We had the opportunity to get to learn more about the crowned Mr. Hinsdale, Patrick Hsiao.

“In my free time, I like to play music, hang out with friends, have fun with my family,” Hsiao said.

For the talent portion of the competition, Hsiao performed a classical piece on a grand piano center stage.

“My mom is Japanese and my dad is Taiwanese so I can actually understand Japanese and Mandarin fluently and I speak a bit of both,” Hsiao said when asked about any special talents he has.

Hsiao is honored to be paying tribute to the Just1Mike foundation, something he made clear during the question portion of the show, as well as when Devils’ Advocate asked him how he felt to be nominated for Mr. Hinsdale.

“I was so excited to support the cause and I was determined to put my all into the show,” Hsiao said.

The other contestants also put their all into the show; having a fun time performing their skits, showing their love for the school, and getting to know each other.

“The most exciting part about Mr. Hinsdale is making a difference in the community by taking part in this fundraiser as well as meeting new people and making new friends,” Hsiao said.

When the drum-roll transitioned into a soft patting, Senior Emcee Lily Podracky and Junior Emcee Lauren Hughes announced Patrick Hsiao was the winner and his family, sitting in front row, shot up in pride.

The next Mr. Hinsdale pageant will occur in December of 2019, with Patrick Hsiao as one of the featured judges.