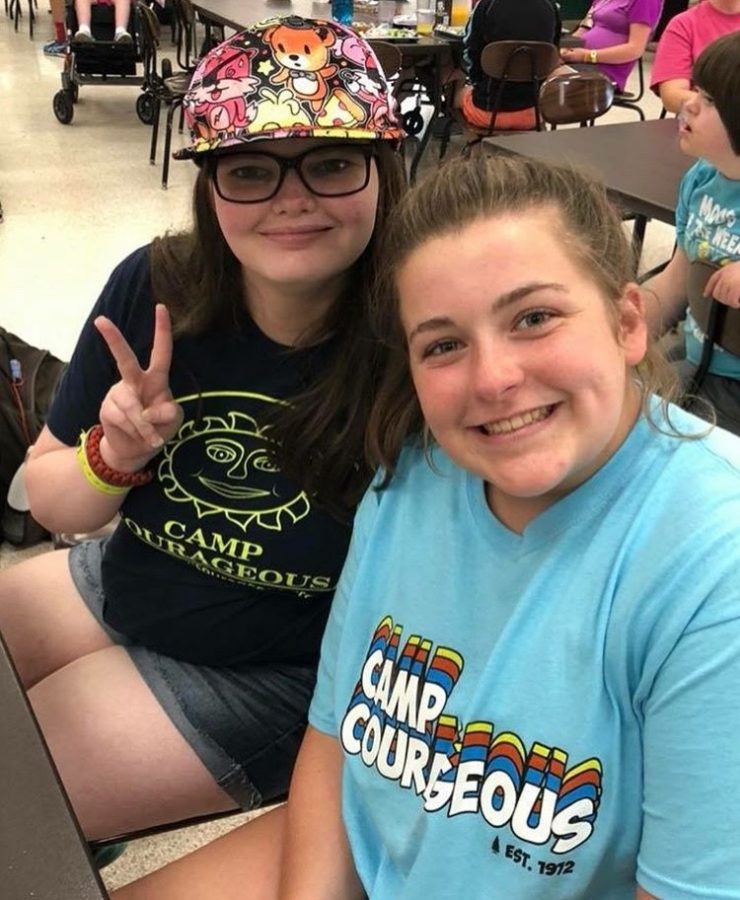 Sophomore Mary Grant smiled as she recalled a memory. A camper, Shelby, had ketchup all over her face and was running towards her at a pace that an Olympic track star could be jealous of. All Grant could do was stop, dead in her tracks, and stare. (“I have an extreme fear of ketchup,” Grant said, with a dead-serious tone). When Shelby finally got to Grant, she gave her a huge bear-hug. In the process, ketchup got all over Grant’s shirt. Grant, although petrified of the ketchup, saw how happy Shelby was and pushed her fear aside to laugh along with her.

This past summer, Grant spent the week of July 1-7 volunteering as a counselor at Camp Courageous. Camp Courageous, located in Monticello, Iowa, is a camp designed for individuals of all ages with special needs. It was founded in 1972, when 40 acres of land was donated for the sole purpose of making a camp for people with special needs. The camp hosted its first 211 campers in 1974. Today, the camp has more than 200 acres of land and 25 buildings. It runs on donations and volunteers; Grant volunteered with the camp through her church group.

This was Grant’s first time volunteering at the camp; it was also her first time going to a sleepaway camp at all.

“It was a little stressful going into it. I never had a camp experience and didn’t know what to fully expect,” Grant said. “But I still had a great time.”

Although a camp environment was new to Grant at the time, she still did lots of volunteer work during her week. She spent long hours looking after her campers and cleaning up around the camp grounds. Grant’s assigned group of campers ranged from 16-20 years old and were all girls.

“My group of campers were all pretty high-functioning. They were so sweet and understood that I was there to help them,” Grant said.

Lainie Brixie, sophomore, also joined Grant at Camp Courageous over the summer. The two spent much time together over the week; Brixie got to see how Grant interacted with her campers.

“She was very inclusive and she got to know all the campers really well,” Brixie said. “I could really tell she wanted to be there.”

Grant has always had an interest in working with kids with special needs, even when she was younger. Her older brother, Eddie, has high functioning autism. Last year, he graduated from Central and is currently a freshman in college.

“Going into the camp, I could apply my previous knowledge from what I grew up with and experienced with my brother,” Grant said.

Now, at age 15, between her childhood and her volunteer work, Grant has much experience with special needs and a curiosity for what more she can do.

“She has a really good outlook on life,” Brixie said. “I could tell that it left an impact not just on her campers, but all people around her during camp.”

Grant’s interest in working with special needs kids isn’t stopping at Camp Courageous. Grant is planning to participate in the Adaptive PE course at Central next year, in which students work with students with disabilities during their physical education class. In the future, she is also open to the idea of having a job that involves working with special needs individuals.

As for next summer, she plans to volunteer at Camp Courageous again, even if she’ll end up with ketchup all over her shirt again.