New science club on the rise 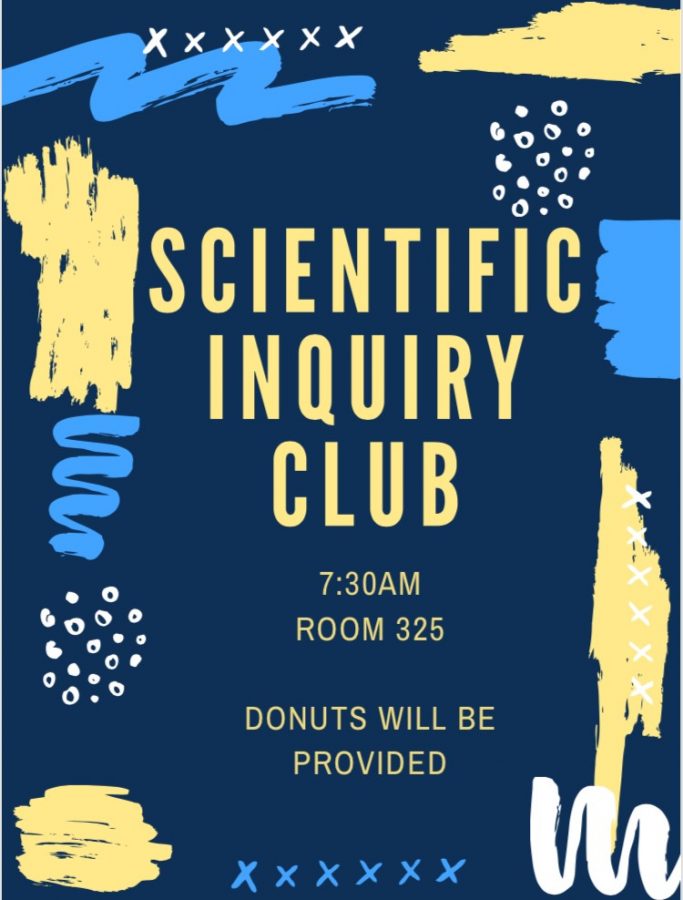 At 7:15 a.m every other Friday, the board members of Scientific Inquiry can be found setting up slideshows and videos, compiling last minute Twitter conspiracy threads, and arguing over who was supposed to bring the donuts. Laughter fills the room as leaders of the new club recount the most absurd threads. The meeting seems to be all set up, but just 12 hours before, the board members, Shannon Stifflear, Elizabeth Farrah, Apple Patel, Nora Duffy, Abby Chute, Raina Jain, and Jenni Liu, had planned the next day’s meeting through their iMessage group chat.

They all have jobs to help the meetings run smoothly: Farrah creates the powerpoints, Chute finds the videos, Jain acts as the secretary during the meeting, and so on.  Eventually, the curious yet apprehensive faces of their members wander into the room, hoping to gain some new insight on whatever their board has selected to talk about that day. This time, it’s the Mattress Firm theory, which is a popular topic online. The eight founding members of the Scientific Inquiry club, also known as SINC, present the theory and information to the members and open up the meeting for discussion. Various members comment on the theory, offer some of their own input, and listen to their peers on the issue at hand.

From a young age, Shannon Stifflear, sophomore and founding club member, had been interested in forensic science, citing her interest from all of the murder mysteries and Law and Order episodes she had seen.

To this day, Stifflear remains interested in forensic science, criminal law, and murder mysteries, expressing her interest in the popular TV show Criminal Minds and new YouTube series Buzzfeed Unsolved. From sources such as these, she and the other board members gather ideas and inspiration for their next meetings, making sure to discuss them together and consider whether or not their members would be interested in their ideas and discussion topics. Earlier meetings this year featured discussions about different conspiracy theories, criminal cases, or unsolved mysteries, such as the Zodiac Killer, a topic that has gathered a lot of interest and speculation, especially emphasized by the SINC’s discussion.

“I think all of the different theories are really interesting and originally, I got into it because it was different and the psychology behind a lot of these issues is something I really wanted to learn about,” Stifflear said.

As a freshman, Stifflear had hoped to join the Forensics team but was disappointed to learn that it did not mean Forensic science as she had thought, which is what compelled her to create her own club and recruit other people who shared her interests.

“Abby [Chute] knew I was interested and suggested we form the club,” Stifflear said. “If it hadn’t been for Abby, I wouldn’t have felt as motivated to go out and form this club with my friends.”

Through the hard work and perseverance of Stifflear and the other board members to form the club, more than 20 students have joined and regularly attend meetings.

“I’m interested in this club because I think conspiracy theories and such are really cool,” said Abby Antinossi, sophomore and club member. Antinossi also participates in Spanish club, Peer Leadership, Mock Trial, and the swim team, but is excited for SINC every other Friday morning.

“I think it’s important to get involved with things at the school and be a part of the community here at school,” Antinossi said.

Many students find themselves a bit overwhelmed by all of the clubs, activities, and teams available at Hinsdale Central during their freshman year, but many eventually find themselves interested in several things and quickly becoming involved in subjects they’re passionate about. Joining clubs and activities at school can help many students feel like part of something bigger than themselves, make friends, or just have fun, all of which are essential to the school’s environment.

“I think it’s important to have a clear vision of what you want to do and remember to persevere through the process no matter what, because I definitely think it’s worth it in the end,” Stifflear said.

After close to 30 minutes of discussion on that day’s topic, the SINC club wraps up its meeting, dismissing the members, cleaning up the leftover donuts, and gathering any items left behind. The board members seem satisfied with the meeting and the discussion their members participated in, and as they head to first period, they say their reflections include planning the next meeting where they can decompress everything discussed.