Studying with a former DEA assistant 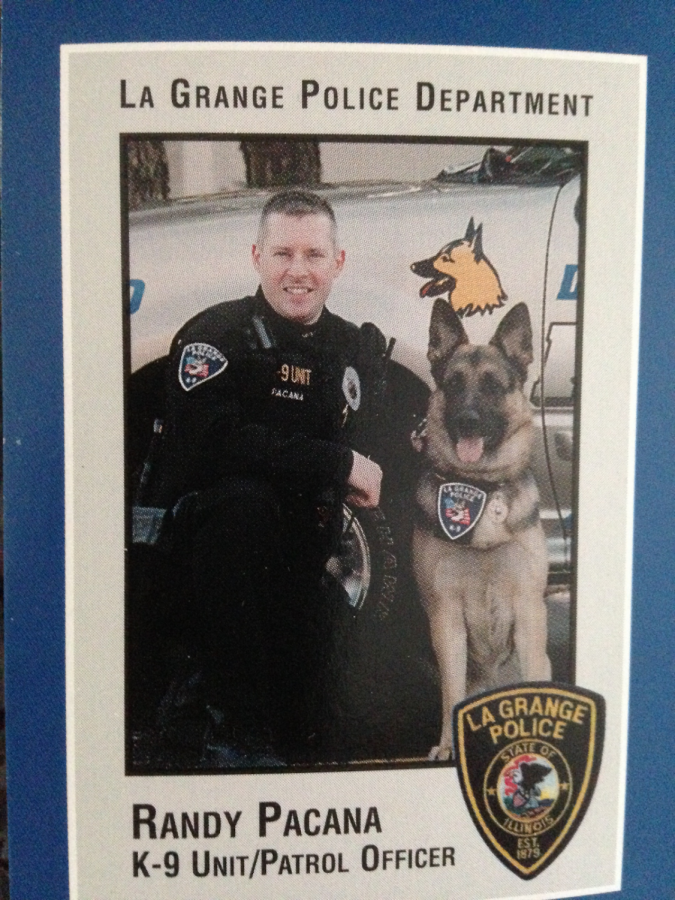 Study Hall teacher, Randy Pacana, had served as a police officer for more than 10 years before joining the Central team.

His Doc Martin’s are perched up on the weathered desk. Blanketing the chair beneath him is a large coat, warm enough to aid Randy Pacana’s body temperature when holding the door open for students before and after school. Behind him are intricate drawings on the wall, some his son drew and others by his beloved study hall members. One drawing sticks out from the rest, a German Shepherd dog standing proud and looking valiant.

Maximus was Pacana’s K-9 partner imported from Germany and certified in obedience. During area searches, tracking, building searches, aggression control, and narcotics detection, the two became best friends. Although Maximus is no longer alive, Pacana can’t help but reminisce on the great memories they shared and the type of dog he was.

“My K-9 partner was simply the best,” Pacana said.

Although most Hinsdale Central students only know Randy Pacana as the friendly and kind study hall teacher, many don’t know he also served in the police department for 14 years and assisted the DEA.

Pacana has taken on many jobs in his lifetime. After he graduated from Illinois Benedictine University, he went into Video Productions and shot and edited various video projects. He then worked as a Service Manager for a Heating and Air Conditioning company. In 2001, he was hired by the LaGrange Police Department as a K-9 Unit and Patrol Officer.

Walking into room 012, it’s easy to see that Pacana’s students really enjoy the class. Katlyn Farra, sophomore, is a student in Pacana’s study hall and a friend of his.

“Randy is such a laid back and fun person to be around. I think all of the students love him so much because you can really tell he cares about us and he’s easy to talk to,” Farra said.

Although it’s not required, Pacana holds the door open for the students, and even stands in the cold weather during the winter.

“He always holds the door open every morning and greets me and all of the other students. We all see him as a friend and not a teacher,” Farra said.

Walking into the study hall classroom, it’s easy to identify memories made around the room. Whether it’s drawings on the wall or gifts displayed proudly on Pacana’s desk, it’s visible to see that the students get up and do things during study hall.

“As for the drawing in the classrooms, I encourage students to draw as a stress relief. Plus, it adds to room 012’s ambiance,” Pacana said.

Pacana has always had the intent of helping others which can be shown in each of his jobs. After serving his time in the police force and specializing in Warrant Service, Drug Investigation, and Gang Suppression, Pacana got a call from his co-worker who suggested he apply to work at Hinsdale Central for a great retirement position. He applied, and the school hired him in 2015.

Sitting in the center of room 012, letting his students draw or talk around or do their homework, Pacana is endeavoring a new adventure and job. Although he still flinches when there is a loud noise in the hallway or can’t help but talk about his best friend, he is now a study hall teacher. Kicking his feet up on the desk, he can finally take a break.

“I’m just excited to see where this job takes me,” Pacana said.