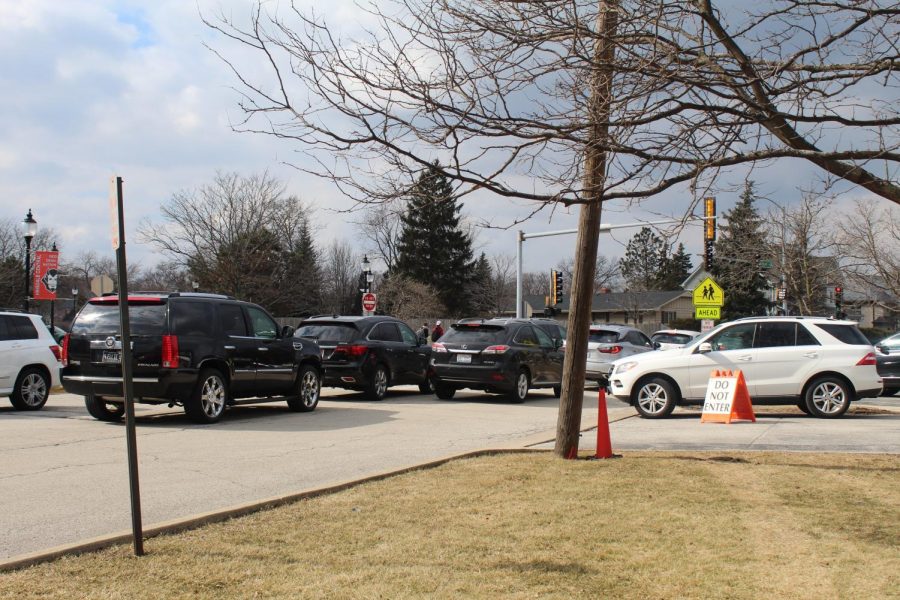 After the passing of a nearby teenager in a school zone after being struck by a drunk driver, students reflect on safety on Central's campus.

On Thursday, Feb. 19, Beth Dunlap, a junior at Downers Grove North High School– a school just minutes away from Central passed after being hit by a driver under the influence on the crosswalk outside of the school.

“This situation could have been avoided if the man that hit her was not under the influence and was following the rules of the road. Beth was being safe, as she was in the crosswalk at the right time,” said Zoe Smith, senior.

There are traffic guards placed on the crosswalk for kids walking to school, and to regulate traffic. Regulating the roads is taken very seriously as the loss of a student and peer to the community has made many students reflect on the safety of commuting at Central and reflect on how such accidents can be avoided at the school.

“After hearing about Beth Dunlap, I know a lot of people were shocked and sad that even on school grounds something like that could happen,” said Allan Li, senior.

At school, students commute in various ways with the majority of students (63.3 percent) driving to school and taking the bus (22.4 percent), according to the Advocate survey. Other forms of commute exist as well where students walk, bike, or even take Ubers to and from school (14.2 percent).

For all methods of transportation around the school comes the issue of safety for students and what the school and students can do to take precaution against avoidable accidents. For the students who walk, the crossing guard makes sure that cars drive slowly on the school grounds and that student pedestrians are given priority on the crosswalks.

“There are two totally different crossings. One is governed by the village of Hinsdale they supply an employee which usually can be a community service officer or police officer at the pedestrian crossing at 55th and Grant,” said Mr. Kevin Simpson, the director of security at Central. “Then the school district employs one of the two supervisors to ensure the safe crossing between the faculty lot and cars that drop off by the pool doors.”

These positioned guards help ensure the safety of all students and staff during school mornings when traffic can be heavy.

“When I walk to school, it’s nice that the crossing guard is always there, he’s super helpful,” said Gabrielle Sullivan, junior.

The school has 19 buses that are on routes before and after school to transport students— a number that Mrs. Dever, the Director of Deans, suggests to be small for the size of Central due to the number of students that choose to drive instead.

Bus safety courses are offered to students at the beginning of the school year to prevent any situations of students being unprepared during an emergency. This demonstration by the school also serves to make sure students are making safe choices while on the bus.

“Even though I don’t take the bus, I remember the demonstration at the beginning of the year,” Sullivan said. “The bus drivers showed us what to do in the case of a fire and other emergencies and I think our school did a good job of organizing it.”

However, with one informational session per year, some students commented on how the knowledge from this demonstration can wane over the course of the year.

“There’s always a bus demonstration at the beginning of the year, but everyone forgets about it throughout the year,” said Ella Simms, junior.

Li added, “There are a couple of things I know students do on the bus that they shouldn’t be doing like juuling, standing on the seats, and being loud. My bus is relatively quiet but I know some buses get really chaotic and I think students should understand that their dangerous actions can distract the bus driver.”

As the Advocate survey revealed that driving was the most popular method of transportation to school, a significant number of drivers in the senior parking lot and those coming through the front and side doors of the school are constantly faced with having to take extra precaution while driving in a school zone.

Students who drive experience different amounts of traffic around the school based on the times they arrive and leave school.

“If I get to school early, there’s no one on the streets really, and there are lots of parking spaces available but that’s at like 6:30,” Simms said.

Like Simms, Smith agreed that the traffic around Central varies at different times of the day and that the school takes good measures to do what they can to help guide the traffic.

“We’re restricted to a certain degree since we [can] limit the congestion of vehicle traffic in the lot, but kids driving up and down [the] parking lot have to care as well knowing that there are pedestrians there,” Simpson said.

The school did, however, take student and staff safety into great account in the construction of the school’s various parking lots.

“We set up ingress and egress to control movements of vehicles or limit vehicle movement in and out of the lot,” Simpson said. “We have also put cones along the lot by the auditorium to prevent two-way traffic from getting into the senior lot so really there’s only one way in and one way out during arrival and dismissal time to control and limit the congestion in that area.”

The school also follows state guidelines by removing speed bumps during the winter and putting them back in the parking lots in spring to slow drivers down in the school zone.

“We have a big benefit I think by having the senior lot attached to the school property so the kids mainly go in that senior door so they don’t have to really go near the traffic,” Dever said.

While major accidents are not frequent around Central, students like Li commented on the frequency of bumper accidents in the senior parking lot.

“Sometimes when I come through the senior parking lot or drive with a friend, I see people who park their cars irresponsibly and have witnessed multiple times where this leads to other peoples’ bumpers being hit,” Li said. “This cannot only damage someone’s car but also threaten safety in extreme cases.”

Cases of bumper accidents or other incidents in the parking lots are overseen by the school security director and Dever.

“The amount of bumper accidents that get reported is probably less than how many actually occur,” said Officer Mazepa, the school student resource officer. “Our school requires students with parking passes to provide insurance information so that the school can have this information on file to help in the case of an accident.”

Having insurance on file not only helps student drivers but also pedestrians who cross through the parking lots.

“Walking through the senior lot is crazy sometimes, everyone just wants to leave. Having that information on the students is good in case anyone ever got into an accident,”  Sullivan said.

One of the ways Central tries to reduce accidents in the parking lots is by giving students who may have difficulty arriving and leaving school separate medical parking spaces.

“I have a medical parking spot now which is so much more helpful because I can get to school later and not have to get stuck in all the parent traffic,” Simms said.

While all forms of transportation that students take around Central carry some risk to safety, the school has taken measures to have staff with the responsibility of keeping students safe on their commute.

“This year so far, there have been no large incidents threatening the safety of students on their commute to school,” Mazepa said. “This is not to say that nothing will ever happen but our school does take all the measures they can to prevent such incidents.”