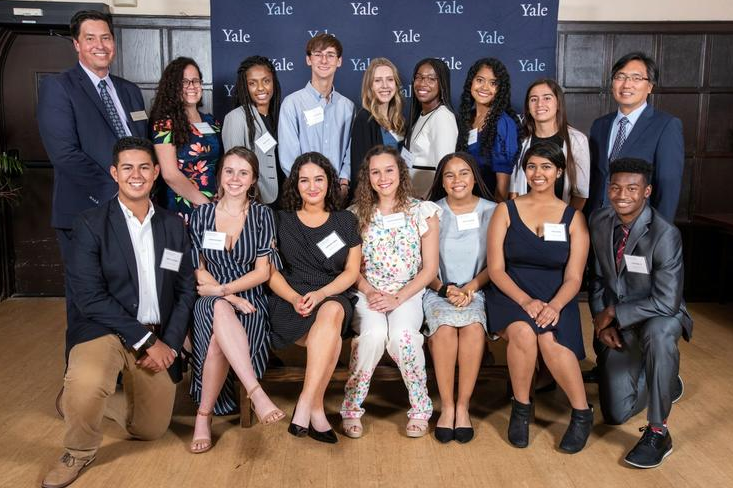 Pictured here are the 15 recipients of the Yale Bassett Award at the Yale campus.

On Sept. 26, senior Catherine Collins attended an award ceremony for the Yale Bassett Award for Community Engagement that she won. This award ceremony took place at the Yale campus and honors students who are making a difference in the world. Only 15 high school students across the entire nation receive the award.

“It is so inspiring to see someone my age accomplishing so much at a young age,” said Tea Pantelic, senior.

Collins received this award after she and her sister Alexandra, sophomore, started an organization called SAEtO, Students Against Ethylene Oxide last year. Ethylene oxide is a carcinogenic chemical that has been released into the local community for the past 30 years. Recent protests throughout the community called for the closure of Sterigenics, which had been accused of releasing the chemical. The company closed permanently in September.

SAEtO works to educate students and get them involved with the issue of ethylene oxide.

“We have started a letter-writing campaign to send letters to different state and national legislative officials,” Collins said. “We have also testified in support of laws supporting the ban of ethylene oxide in dense populations and near schools and daycare’s as well as a law for the phase-out of ethylene oxide.”

Collins presented her booth during an EPA meeting in order to raise awareness about ethylene oxide and has even gained members from different schools who have been affected by ethylene oxide.

“I had her in AP Lang and Composition last year, and she was one of the students who actively participated in every discussion we had and always offered a unique perspective in looking at things,” Lopez said. “She worked with ecology club and really pushed to get rid of the dangerous chemical that was in the air, so I think that with her leadership and ambition, she was a fine candidate for the award.”

Upon winning this reputable award, Collins learned many things during the ceremony.

“It was super fun to meet the other recipients and listen to an A Capella group who performed Afro-themed music during dinner,” Collins said. “It was also inspiring to learn about the work being done by the Center for the Study of Race, Indigeneity, and Transnational Migration.”

Collins plans to continue making a difference in her community by doing selfless acts to help others.