Coaching beyond the mat 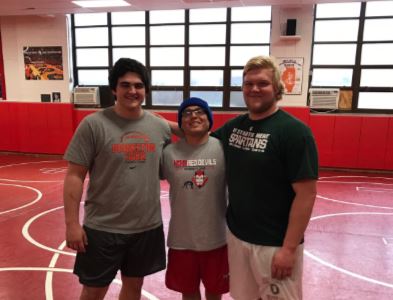 All lights are focused on just one mat and two competitors. Two rivals facing off in the ultimate competition of strength and endurance. Both completely focused, unable to hear the roaring coming from both sides of the mat. Coaches screaming different moves, doing everything they can to help their wrestler come out on top. Wrestlers on deck as well as those already having completed their matches echo the coach’s words, all doing what they can to help out their teammate.

It’s an all out battle on the mat, and every point means something. Down 13 points to DGN, Central wrestlers needed to mount a comeback if they wanted to come on top. The balance of momentum rests upon just one junior wrestler, who is in the middle of what he would remember as his greatest memory over his four years of wrestling experience. With sweat dripping on the mat with every passing second, he finally secures the pin in what would eventually become an 11 point win over DGN. And who else congratulates him first, but the coach he’s known since he started wrestling, Jason Hayes.

Hayes has been coaching the varsity wrestling team at Central for 11 years, and has had a great impact on all of his wrestlers each and every one of those years. Throughout his time as coach, Hayes has instilled a drive in all of his athletes to work hard at everything that they do and always put forth that extra effort all stemming from his own experiences.

There’s no one who practices what they preach more than Coach Hayes. Three days a week, every week, Hayes gets up at 4:45 to get ready to have a morning workout with his wrestlers, teaches a number of physical education courses throughout the day, runs another practice for wrestlers after school, holds yet another practice, this time for kids club participants, and only then does he finish his day at 7:30 p.m.

Practices start every day at 3:15 right after school, in which wrestlers will begin with a dynamic warm up as well as some bodyweight exercises. Following this will come some drilling of technique that was learned the day before, as well as the introduction and drilling of new techniques. To finish up practice, there will be live wrestling and some conditioning. Additionally, two days a week wrestlers will have lifting, either focused on muscular strength or endurance.

But what matters most about what Hayes does, is what he works to teach all of his wrestlers about life, and how it compares to wrestling.

“Wrestling teaches what life is really about,” Hayes said. “I’m trying to make these kids better human beings. You can be successful as long as you have a strong passion and work ethic. At the end of the day it’s more than the wins and losses, it’s about becoming productive kids in society after all of this.”

Coach Hayes has gone through everything that his wrestlers are, having started wrestling after being cut from his high school basketball team his freshman year. And kids have certainly taken in everything that Hayes has taught them.

“Wrestling has taught me that hard work pays off. While you may not be the best at the start of you continue to work technique, strength, and endurance you will get better,” said Josh Keating, varsity wrestler.