English teacher wins athletic award and prepares for next marathon 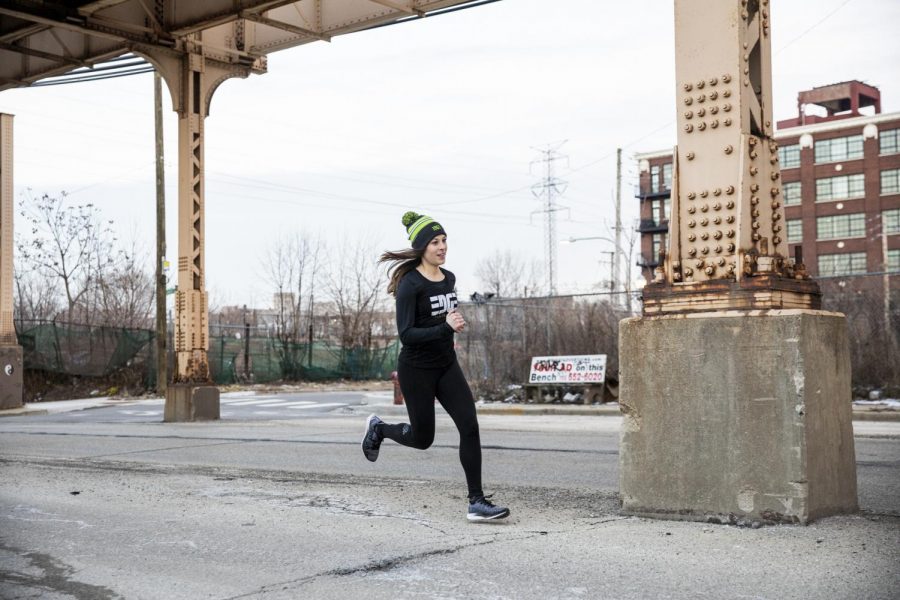 English teacher Katie Tosh recently won the CLIF Bar Athlete of the Year and is training to run in the Boston Marathon, which will now take place in September.

5 a.m – Wake up
7 a.m – Arrive at Central
3:30 p.m – Head home to the city
5 p.m – Grading and planning
7 p.m – Daily workout and training
9 p.m – More grading and planning
11 p.m – Go to sleep
That is the very-structured daily schedule of first-year Central teacher Katie Tosh. Tosh recently transferred from South, where she was not only an English teacher, but also the Activities Director. Now, Tosh continues to teach English at Central as well as co-sponsor National Honor Society (NHS). In addition to her roles within the school, outside of Central, Tosh is a successful competitive runner, and she was recently honored by Chicago Athlete Magazine as the female Athlete of the Month.

Each month, Chicago Athlete Magazine highlights Clif Bar Athletes of the Month. Tosh was featured in May in the magazine after completing the Spring Chance BQ2 Marathon in April 2019 with a time of 3:22:12, the fastest among any female competitor.

According to their website, Chicago Athlete Magazine, “is an active sports and lifestyle publication with a focus on running, cycling, triathlon, fitness and adventure activities. Chicago Athlete provides up-to-date coverage of the local endurance scene in every season.”

While Tosh explained that she has become more competitive in the last few years, running was an activity that she has enjoyed for a long time.

“I’ve always just loved running, and even if I wasn’t fast per say, I just enjoy doing it because I like the act of it and I like the communal aspect of it, too,” Tosh said.

Though Tosh maintains an active lifestyle and considers running and athleticism a major part of her life, she also manages to stay balanced as a teacher and club sponsor.  As previously mentioned, Tosh currently teaches English at Central. She has two English 3 classes and three AP Language and Composition classes.

“As a teacher, I aim to be encouraging and supportive of each of my students as individuals.  I think that one of the most important qualities that teachers can have is to be student-centered and understand that each student is more than just a student in your classroom; they are individual people with unique interests, strengths, and talents,” Tosh said regarding her teaching style and the importance she places on getting to know her students.

Tosh also said that she has a close relationship with Mallory Bauer, a fellow English teacher who also transferred from South to Central this year, and considers her to be one of her best friends. Tosh and Bauer met close to 10 years ago as colleagues at South.

“She’s the hardest working person I know, and she’s always putting 125% into whatever she’s doing, whether it’s prepping for her classes, grading, or running,” Bauer said. “She’s hardworking, honest and she’s just that person that you can turn to and trust.”

Bauer also emphasized the balance that Tosh is able to maintain between school and running, and also noted her devotion to her students.

“I would hope students recognize that she’s not somebody who’s putting in the minimum. She’s trying to do her best for them and make meaningful experiences for all of her students here,” Bauer said.

Bauer also explained that after Tosh’s recent finishes, the English Department decided to celebrate her successes by greeting her with additional Clif Bars placed on her desk as a surprise.

“When I saw the Clif Bars and all the notes that my colleagues wrote me, I was super appreciative.  It is a privilege to be part of such an awesome community, and it was so kind that they took the time to celebrate me,” Tosh said.

Tosh first attempted running longer distances during her first year of graduate school. According to Tosh, she was encouraged to start running after a bad breakup, and while it was explicitly a leisure activity at first, as she began to run more often, she decided to approach it with a competitive mindset. She said she started running longer distances about seven years ago; first a 10k and then a half-marathon.

In 2013, four years after she first started running, Tosh completed her first marathon. Tosh explained that she never intended to become a marathon runner.

Following her first marathon, Tosh continued to train for marathons. As she discovered that her intense practice could lead to more successful marathon experiences, she began to run more. According to Tosh, she has now run 11 marathons, including the Chicago Marathon seven times, the New York Marathon twice, Grandma’s Marathon, and the Spring Chance BQ2 race.

“Once I really started building up my speed, I realized I could qualify for the Boston Marathon, so I made a point to train for that,” Tosh said.

Tosh qualified this year for the first time for the Boston Marathon, which was originally scheduled for April, but has since been postponed to September as a result of the COVID-19 pandemic. Rather expressing disappointment, however, Tosh expressed optimism.

“I honestly felt relief that it was postponed rather than cancelled – and, in a way, it’s exciting because this will be the first time that the Boston Marathon has even taken place in September!  It’s exciting to be a part of history,” Tosh said.

According to Tosh, the shelter-in-place has made it more difficult for her to train. However, Tosh explained that she sees this as an opportunity to focus on other types of workout, and she encouraged other athletes to do the same.

“My advice would be to reframe one’s mindset, and instead of looking at this time like, ‘I’m disappointed I can’t be training in the way I normally would,’ look at this time more as an opportunity to try new workouts, get in some extra stretching and recovery, work on strengthening areas that are often neglected,” Tosh said.

Before the pandemic broke out, Tosh was training regularly with Edge Athlete Lounge, a gym and recovery center in Chicago. Tosh said that while the group does focus on recovery, it also acts as a general training facility for athletes. Tosh also said that in addition to training, she also coaches other runners at Edge Athlete Lounge.

“I think coaching is so similar to teaching and that you have to understand who it is that you’re working with and you have to be able to listen to them and not necessarily infuse your own goals onto them, but rather [consider] where they are and then ultimately help them to accomplish whatever goal that they’ve set out to accomplish,” Tosh said.

Tosh also said her experience teaching and working with students in school has allowed her to better train and coach her fellow athletes. She emphasized the time and effort she puts into helping others and getting to know them.

“No two people are the same and one approach to coaching that works for someone might not work for someone else. In order to best coach to someone’s strengths and weaknesses, you really have to spend time getting to know them first,” Tosh said, citing the similarities between teaching and coaching.

That same mindset also allowed Tosh to step in as co-sponsor of one of the biggest clubs at Central: NHS. According to Bauer, who also became a co-sponsor this year, while they are still working out the kinks of running such a large club, they are optimistic about next year.

“We’re trying to do right by all of our NHS students, and hopefully next year we’ll have the bugs worked out,” Bauer said.

While Tosh and Bauer expressed that there is a lot of room for growth when it comes to NHS, many students felt that they had already made an impact.

“It’s an honor working with [Ms. Tosh],” said Kyle Shrader, NHS president. “She does a lot to help guide us. She’s a great leader.”

Shrader explained that if he didn’t already know that Tosh was a competitive runner who dedicates a lot of time to running, he would never be able to guess it given her calm and focused demeanor.

Yet, according to Tosh, she partakes in some sort of athletic activity at least five or six days a week, whether it’s yoga, strength training, or a long run.

“I feel like a big part of my personality is being an athlete and trying to support other athletes,” Tosh said.

Junior Colleen Yopp, who has Tosh as a teacher for AP Language and Composition echoed the sentiments made by Shrader.

“[It seems like she] balances [her activities] really well. I would never be able to tell she’s somebody training for a marathon because she’s so relaxed and calm,” Yopp said.

While it may seem counterintuitive to some given her busy schedule, for Tosh, dedicating time to running has actually made her more at ease.

“I don’t care if people like running or not running. The takeaway I want people to have is: Have a passion for something. When I was younger, I would prioritize things like work, but [your passion] can be something outside of school or work, and you’ll be more satisfied and fulfilled as a result,” Tosh said.