Parsons takes the ice with the best in Illinois 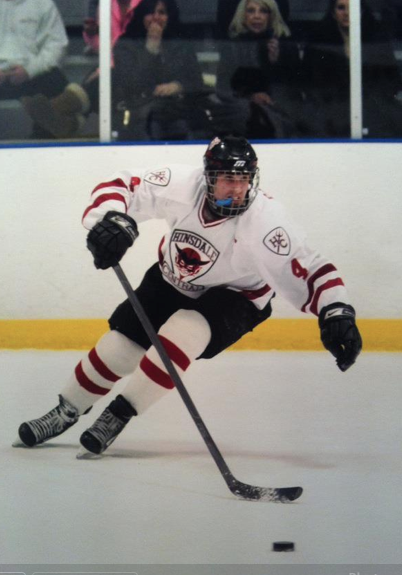 Senior hockey player Teddy Parsons has been selected to participate in America’s Hockey Showcase from April 11 to April 15 in Pittsburgh, PA, playing for the Illinois Showcase team.

“I was asked to tryout for the team by the head coach, Brian Noonan. Approximately 120 kids were asked to tryout, including my fellow Hinsdale Central teammate, senior Phil Abate,” Parsons said.

There were three tryout sessions, which consisted of the group being split into six teams, playing three games per session. While the athletes were on the ice, coaches and scouts would observe and evaluate from the stands. Parsons was one of the six defensemen selected for the team.

“It is an honor to represent Hinsdale Central on the Illinois showcase team, along with the best high school talent in the state,” Parsons said.

Parsons is familiar with a majority of the other players on the Illinois team because he has played against them in the regular hockey season. “It’s nice to know that we are playing on the same team this time,” Parsons said.

During the showcase, there will be junior and college scouts observing from the stands. While Parsons is excited for this, the prospect of playing itself excites him just as much. “I am grateful for the opportunity to be on the ice every chance I can get and that I get to continue to play the game I love,” Parsons said.

Parsons learned how to skate at the age of three, and has been playing hockey since he was five. He plays both for a club team and for Hinsdale Central’s team.

“My favorite thing about hockey is that it is truly a team game,” Parsons said. “It demands an adherence to the philosophy that failure will be measured by the selfishness of the individual and success by the ability of a team to work together.”