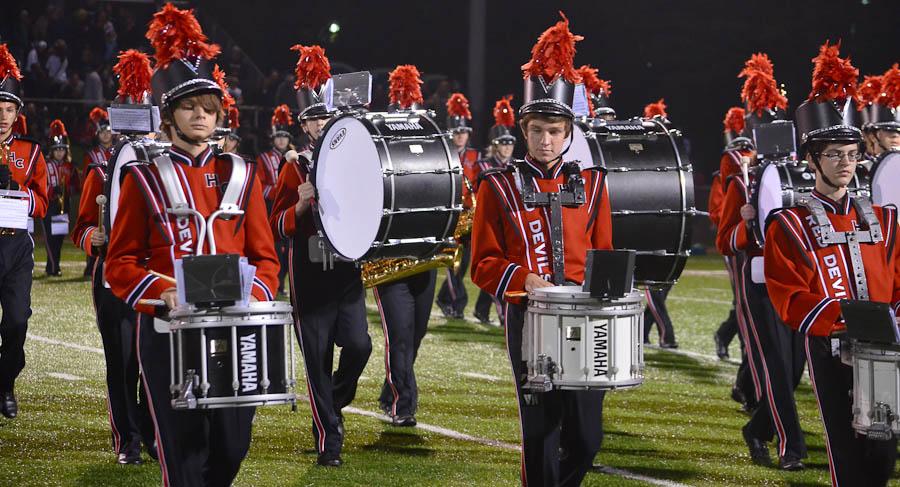 Long before the crowds started piling into the stands for Friday’s football game against Glenbard West High School, the marching band was busy preparing for the game.

During every home game, the marching band performs at pregame, halftime, and on the sidelines.
“The band adds lots of energy to football games by providing entertainment and honoring the nation in the pre-game show with the Star-Spangled Banner,” said Mathew Goeke, band director. “The band also plays a variety of music during the half-time shows ranging from popular music to Beethoven to jazz. During the football game, the drum line contributes catchy beats, called cadences, during breaks and the band plays small snippets of music during time outs.”

This past week’s game focused on 80’s music, with the band playing Every Little Thing She Does Is Magic by The Police and Jump by Van Halen.

“This week’s music has been really fun,” said Michelle Owens, a junior clarinet player. “I have the melody for a couple of bars, and I’ve been singing it to myself all week. It’s a song we’re all familiar with, and it sounds beautiful when it is played by wind instruments.”

Along with playing the music, the band moves around the field with the color guard to a drill, made by Matt Kurinsky, band director, long before most students begin thinking about school.
“I pick music in the spring and write drill (the movements) over the summer. We have a week of rehearsals before school starts to get ready for the first game,” Kurinsky said.

“This week’s drill is particularly exciting,” said Mrs. Laura DiMarco, color guard coach. “We have a guard feature, which means we are front and center on the field the whole routine.”

To learn the music and drill, band students attend a summer band camp, practice during class, and have a three hour night practice before each game. They also arrive to school around five to prepare the day of the game.

Central’s students love the atmosphere that the band helps create.

“My favorite part of going to the game is seeing all my friends and meeting new people,” said Eliza Gaber, freshman.
Still, the game itself must not be forgotten. Glenbard West has been a longtime rival.
“I like that we versed a ranked team,” said Spencer LaMountain, freshman.
Glenbard West won the game, 23-28.
The next home football game will be the homecoming game against even bigger rival, Hinsdale South. The band will be playing Pirates of the Caribbean music for the game.