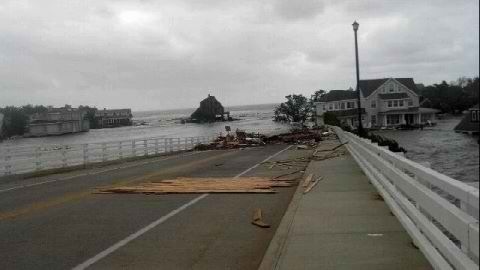 Hurricane Sandy took a toll on the east coast, affecting the friends and family of many students. Students have heard that this may have impacted the election, and the east coast residents explain the situation to them.

Senior Samantha Foulston has friends who live in New Jersey and New York who had firsthand experience with Hurricane Sandy.

Many state officials required or recommended evacuation, and Foulston’s friend, Sophia Diserio who lives in New York, suspected it would prevent voters from going to polls. “People who were hit hardest may have not gotten to vote because they had no electricity or no means of getting to a booth. A lot of stations are in churches which means they have had to end collections somewhat early over the weekend [for early voting],” Diserio said.

The Mid-Atlantic States were most severely affected, and this year New York set a record low for voter turnout. Since the impacted states are predominantly blue states, this could have meant a swing for Romney.

However, as the election has now come and gone, it is evident that did not happen. “I don’t think that Hurricane Sandy affected the election because the states that were affected were not swing states,” said Grace Tate, senior.

With this, a second set of suspicions superseded: each candidate’s response to the hurricanes influenced Americans’ opinions of them. Voters on the fence for choosing Obama may have elected for him as a result of his response to Hurricane Sandy.

Obama rushed efforts to help the impacted areas deal with the damage that the friends of Central students saw firsthand.

“The Con Ed building controlling most of the power of the city exploded due to flooding. The lower half of Manhattan lost power last night due to flooding,” Diserio said. Diserio’s cousins lost power and have had to stay with her until power returns.

Diserio’s school, among all other New York City schools, cancelled classes for three days following the storm. With the storm interfering with simple things like public transportation, many wonder how the aftermath of the hurricane affected voter turnout and the presidential election’s outcome.

“My school is right next to the East River, so yesterday my dad and I went to check it out just before the peak of the hurricane. The river surge was crazy—the FDR was completely flooded and continued to flood as the night went on. I went down again today and it is still flooded. My friends and I have been referring to it as the FDR aquarium,” Diserio said.

Elizabeth Mignon, a resident of New Jersey and friend of Foulston, also witnessed destruction. “At the shore, there’s crazy flooding and the ocean broke through to the bay in a few places.  Pretty much everything at the shore is ruined,” Mignon said.

As everyone works to grasp the damage of Hurricane Sandy, many still wonder the magnitude of its impact and if it took a toll at the polls.