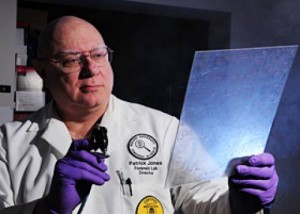 Image from The Purdue Exponent

A crime scene investigator spoke to students last Friday about his experience of working on the John Wayne Gacy murder case. Pat Jones, a former Criminalistic Investigator, discussed the case in order to give students an insight into the mind of a serial killer.

“The police became suspicious of Gacy when a mother of one boy who was to meet Gacy about a job never returned home,” Jones said. “When the police saw Gacy’s criminal record they started to keep a close eye on him.”

Following intensive investigation, research and surveillance, Gacy was charged with the murders of 33 victims. “Pat Jones spear headed the John Wayne Gacy crime scene investigation in 1978,” said Alex Hipskind, a Constitutional Law teacher who organized the event. “Jones was in charge of and aided in digging up the corpses of the victims of the crime.”

The presentation was focused for students who are currently taking Constitutional Law, AP Psychology or other classes about psychology and sociology. “The assembly will give students a real world connection between the materials we are learning in our classes about criminal defense,” Hipskind said.

“In AP Psychology we learned about the human mind, so it’s interesting to hear what Mr. Jones has to say about the mind of a murderer,” said Aaron Feldman, senior.