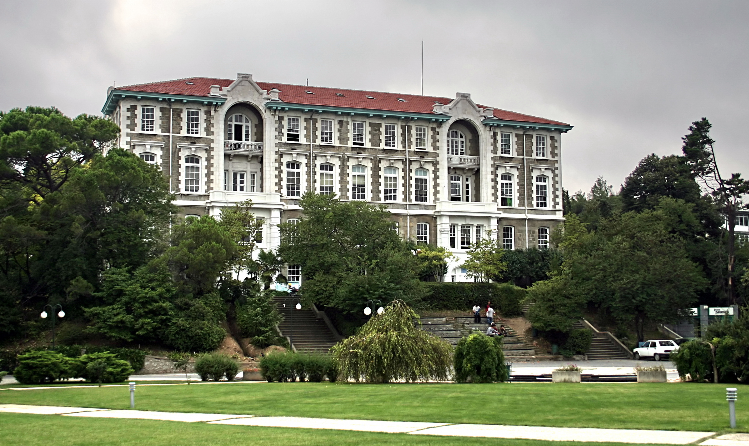 Andrew Jones, English teacher, will be traveling to Turkey next year to fulfill a teaching position in English Literature.

Jones and his wife started looking for jobs internationally through recruiting organizations. They interviewed with different schools and ended up choosing Roberts College in Istanbul, Turkey. “Historically there’s so much to learn,” Jones said. “It’s so interesting. You have mix of cultures, different religions, and different parts of those religions that are there.”

Jones will be teaching English Literature, and his wife will teach biology for at least two years. Jones will also coach the girls’ varsity basketball team.

“I think it’s a great opportunity for my wife and my daughter and I to go expand our horizons and see the world from a different light,” Jones said.

At 150-years-old, Roberts College is the oldest American school outside of the United States. Students attending Roberts College are Turkish students who take a test in seventh grade in order to be accepted into the school. Then, in eighth grade, they must take classes to prepare for the English high school. Many of them aspire to study in the States or Europe, so they will apply to the same schools to which Central students apply.

“The school is a very high achievement school,” Jones said.

Jones has also taught in American schools located in Bulgaria and Ecuador.

“It was certainly another world, [teaching in Ecuador and Bulgaria],” Jones said. Jones stated working with Bulgarian and Ecuadorian students as “very cool.” According to Jones, graduating from this school gave students an opportunity to further their education and study somewhere else. “This was serious life changing business, and it was really cool to be a part of it,” Jones said. “I think I’ve just learned to appreciate people and where they’ve come from and who they are a whole lot more[from teaching abroad].”

Although Jones likes Hinsdale Central, he feels teaching in another country is a great opportunity.

“I also feel like, if this opportunity is out there to go learn more about the world and learn more about myself and work with a different population of students, why not go for it?” Jones said.

In addition, the experience will change Jones as a person.

“I think that I will become a better person and a more well-rounded person to learn more as a result of it,” Jones said.

While Jones is coming to Turkey as a teacher, he wishes to take the opportunity to be a student as well. He hopes to learn Turkish while in Istanbul. The culture will also be very different. He will have to discover what Turkish students are interested in.

“I really look forward to those differences,” Jones said. However, there will also be similarities. “[Students will be] very motivated, very bright, much like Central.”

Because Jones has taught abroad in the past, he will carry over knowledge he obtained in Bulgaria and Ecuador.

“Those four years abroad taught me to calm down a little bit and realize that everything is okay, and you kind of have to roll with things,” Jones said.

According to Jones, it is also very easy to become “dropped in a foreign place”, not knowing exactly what’s going on.

Another adjustment Jones will have to make next year is shaving his beard.

“It’s a Turkish Ministry of Education rule,” Jones said.  “I think the goal is they want education to remain secular and not religious, and so their goal is to keep the religious Imam preachers out of the classroom, and these people, because of their religion, will always have a beard.”

In addition, his daughter will be cared for by a Turkish nanny.

“I want to give my daughter another worldly experience, take good care of her and have her be curious in this new place,” Jones said.

Jones finds it “fascinating” to teach in another country. Jones is looking forward to learning about the culture through his students next year.

To prepare for the move, Jones will have an open mind and be flexible. He also started studying Turkish.

“The best thing you do to prepare is just realizing that it’s okay to feel a little overwhelmed,” Jones said. “You kind of have to embrace the challenge.”

“My goals as a person is to continue expanding my horizons and not get happy in a comfort zone and to continue to open myself up to new experiences and new people,” Jones said.