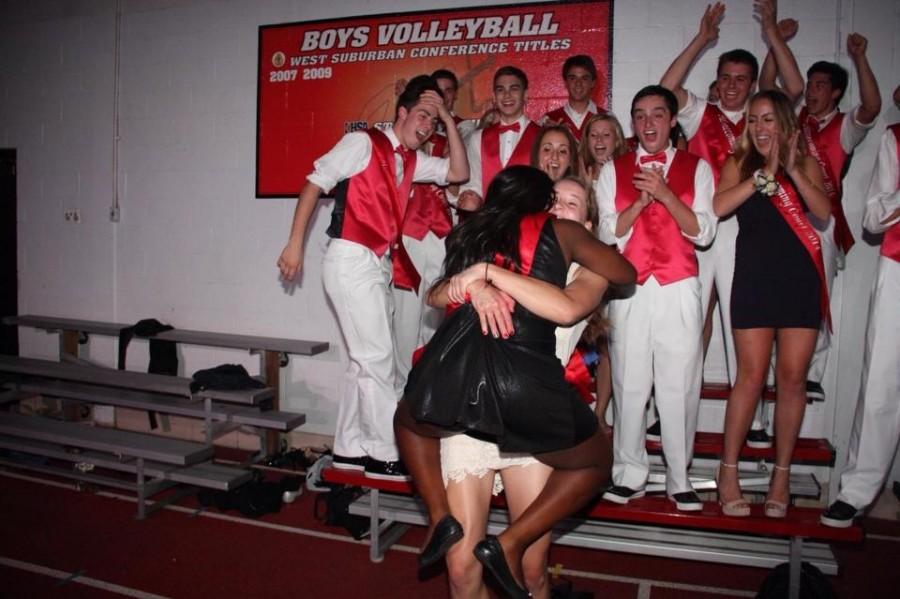 2014 Homecoming Queens Toni Adeyemi and Emma Day share a celebratory hug upon announcement of the tie.

Every year, Homecoming follows a strict agenda. The senior class votes for 12 boys and 12 girls for court. Then, from the court, voters choose one girl and one boy, and the boy and the girl with the highest votes are crowned king and queen at the dance. The steps are clear.

This year, however, Mrs. Sally Phillip and former Varsity Club President Lainey Huth decided it was time to switch it up.

With the help of Varsity Club, the entire school was allowed to vote for king and queen this year, unlike in the past. The seniors believe this is the reason why seniors Toni Adeyemi and Emma Day both won the title of Homecoming Queen.

“It was a suggestion that came up last year as a way to get the whole school involved and interested in that part of Homecoming, and also to draw more people to the dance,” said Mrs. Jill Tylk, English teacher and advisor for Varsity Club.

The inclusion of the underclassmen in the voting process bothered many of the seniors who didn’t feel like it represented the senior class fairly. However, the queen duo disagrees.

“Court may not really affect the underclassmen, but it doesn’t hurt to let them vote,” Day said. “Also, if [the underclassmen] have friends on court, they want to vote for them because they might want them to win.”

“I wish that when I was an underclassman I had the opportunity to vote because a lot of work is put into the skits, and people should be able to choose who they want,” Adeyemi said.

As for the tie, rumors circulated on whether or not it was an actual tie.

“When we looked at the results, two people had exactly the same number of votes, so it was a legitimate tie,” Tylk said. “The voters were probably still mostly the senior class as well.”

Although some may be bothered by a draw, Day and Adeyemi embraced it.

“Emma is a great person, and I texted her like a million times saying how happy I was that we both got to win,” Adeyemi said.

The pair was ecstatic that they even won, let alone winning together. Adeyemi said that Mrs. Phillips told the pair that they didn’t have two crowns or sashes because of the unique circumstances, but due to their closeness, it wasn’t hard to decide who got what.

“I believe that we’re both getting a sash and a crown in the end,” Day said.