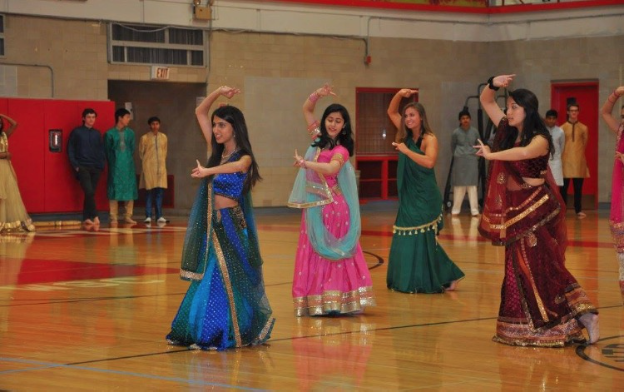 Senior Anisha Advani (left) was one of the leaders of the Bollywood dance.

On April 28 at 7:00 pm in the gym, various acts performed at the annual Ethnic Fair. Some of the acts included K-pop dance, Hindi song performances, Spanish zumba dance, Paraguayan dance, and Latin American dance. Along with these newer groups, the Philippine tinikling and Bollywood dance acts performed again as they have in previous years.

While the Ethnic Fair consisted of many performances, booths were also set up in the cafeteria. Assorted foods and posters were presented to explain the cultural significance of the acts. Students, teachers, and parents were able to explore cultures such as Greek, Indian, and Philipino at this year’s fair.

“Ethnic fair is important to me because I love dancing and being able to share a part of my culture with the school,” said Anisha Advani, senior, who performed in the Indian Dance group.