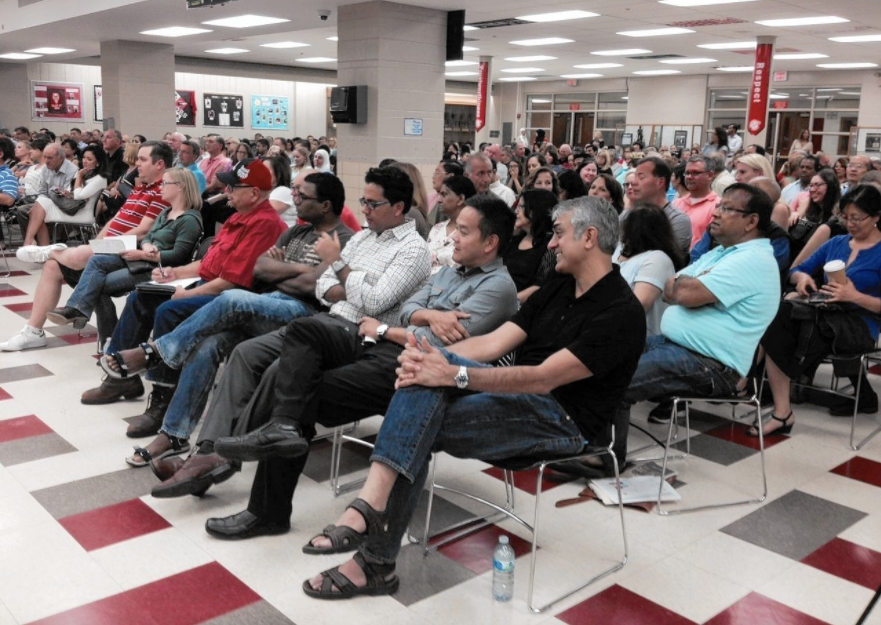 Meeting attendees displayed a variety of emotions about the buffer zone situation, which was a topic of concern at the board meeting on Sept. 12.

On Sept. 12 at 7 p.m. in the cafeteria, the District 86 School Board held a meeting to discuss the possible redrawing of the buffer zone between Central and South.

The buffer zone is an area where residents have the choice to send their children to either Central or South. Currently the buffer zone lies east of Cass Avenue and between 63rd Street and Plainfield Road.

There was much talk of addressing the enrollment imbalance between the two schools. According to the Chicago Tribune, Central has about 300 more students than architects have said is its ideal capacity.

“One of the solutions brought up was converting the District 86 office building near our softball field into additional classrooms,” said Mr. Christopher Wilbur, social studies teacher.

While Central is overcrowded, South is capable of enrolling many more students. Creating magnet programs to draw more students was another method mentioned to get more kids to choose South.

An idea presented of combining the two schools to have an upperclass campus at one school and a underclass campus at another, caused much controversy among parents, and was eventually shut down.

For some students getting to school and making new friends would be a problem if their enrollment was changed.

“I definitely would not want to be forced to go to South, but coming from Gower Middle School, I know a lot of kids at South, so it wouldn’t be as bad for me as it would be for other students potentially,” said Zack Elliott, senior who lives within the buffer zone in Willowbrook.

Another argument is to get rid of the buffer zone entirely to solve the problems of overcrowding at Central and to have more students attend South.

For many homeowners, it depends on their property value. The value of a house in Central’s attendance area has traditionally had a higher home value than houses in South’s territory due to property taxes.

“I feel as though paying Hinsdale South level property tax while sending your child to Hinsdale Central is cheating the system,” said Emmett Wilson, junior. “There’s a reason why the majority of buffer zone students go to Central and that is because of the great high school we have.”

Some residents have also voiced concern about the diversity that Central would lose if their children, many of whom are racially and economically diverse, were forced to attend South.

“I do believe we are on the verge of a civil rights violation,” said Ms. Robin Gonzales, Chicago Public Schools teacher who lives in the buffer zone, after claiming that more than half of Central’s diversity comes from the buffer zone.

Though the issue remains unsolved, District 86 will continue to have school board meetings to let peoples’ voices be heard.